You are here: Home > Books > Practical peace and contentment
By His Holiness the Dalai Lama on Aug 18, 2004 in Books 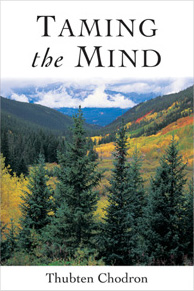 I am very happy to know that Venerable Thubten Chodron has prepared another book, Taming the Mind. In the course of living in both the West and Asia, where she has studied and taught Buddhism, she has acquired a keen appreciation of the various Buddhist traditions as well as of the misunderstandings that sometimes arise about them.

This book helps to overcome such misconceptions, showing how to find peace and contentment through a practical application of the teachings of the compassionate Buddha. Venerable Thubten Chodron has chosen a wide variety of situations that we encounter in daily life and has explained how to deal with them from a Buddhist viewpoint, in words that are easy to understand. In doing so, she has made a valuable contribution to peace and human understanding by providing her readers with the opportunity not only to understand a variety of approaches to Buddhist practice, but also to benefit from such practices in their own lives.

Reviews of “Taming the Mind”
Practical guidelines for good living