Dharma student Julie Rae was inspired to conduct this interview in Seattle, Washington in 1997 after meditating on “How to Rely On Our Spiritual Mentors” from teachings by Geshe Jampa Tegchok in Transforming the Heart: The Buddhist Path to Joy and Courage. Says Julie, “It seems to be the tendency of beings to focus more on the faults of others than on their good qualities. When we see our teachers in this way, we may not be motivated to practice what they teach. In an effort to improve my relationship with my spiritual teacher, I decided to focus on how our spiritual guides do the work of the Buddhas and bodhisattvas by working for sentient beings right now. Knowing that Venerable Thubten Chodron is away from Seattle quite often throughout the year, I asked myself the question, ‘Where is she and what is she doing? What type of work is she involved in when she is in the Seattle area?’ This inspired the following interview.”

Julie Rae (JR): Please tell me about your teachings in other places.

Venerable Thubten Chodron (VTC): Later on this month, I’m going to Houston, Colorado Springs and Austin. In Houston and Austin I will be teaching in Chinese communities. I feel it is important to have connection with the Chinese communities for a number of reasons. My full ordination as a bhikshuni is in the Chinese tradition. I have lived in Singapore and in Hong Kong. Also, it is important for good connections to exist between the Tibetan tradition and the Chinese tradition. After all, Buddhism is Buddhism.

I go to Mexico every year because there is a very strong group there—we had over 100 people at the one-week retreat.

I will go to Israel this year, as people have been inviting me for some time. Many young Israelis go to India after they finish in the army and meet the Dharma there. Practicing Buddhism can be hard for them because they come from a particular culture and they have the tremendous mental strain of living in the Middle East. Teaching the Dharma to them—especially patience and compassion when they’re actually under attack—can be quite challenging. A teacher needs to unpack the meaning and go into depth about this. I’m also interested in going to Israel because of my Jewish background and because there are so many people of Jewish origin who are now Buddhists. Visiting Israel allows a wonderful opportunity for inter-religious dialogue. 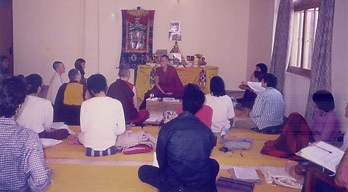 It’s very valuable to lead retreats in India where participants are often young travelers in their twenties.

Every year I go to India, where I usually lead a retreat either in Bodhgaya or Dharamsala. Participants are young travelers, many in their twenties, when in America, people in their thirties, forties, above attend classes. The young travelers in India have just finished school and are wide open to the Dharma. The group is international, so people learn a lot from those of other cultures. These travelers are out of their own environment and have the space to think about changing. So it’s very valuable to lead these retreats.

Many people in America ask where the next generation of Buddhists will come from. These courses and retreats with young people will be a source. This is also why I lead a week retreat-course through Chapman University every year. Students come for three easy credits, but they meet the Dharma and their whole life is transformed! By teaching Chapman courses and the retreats in India, I have a chance to plant seeds for the next generation of Buddhists.

Often I go to the the Mind and Life Conferences where His Holiness discusses various topics with Western scientists. There is another one in a couple of weeks but I’m not able to attend this year. When I’ve attended in the past, I’ve found them very enriching in terms of learning about science and Buddhism and how they meet each other. This helps in my work to bring Dharma to the West.

Also, in the past I’ve attended the first two conferences of Western Buddhist teachers with His Holiness.

JR: Aside from teaching Mondays and Wednesdays at the DFF [Dharma Friendship Foundation] center in Magnolia, where else do you teach in Seattle?

VTC: I frequently receive invitations to give talks in the Seattle community. I go to many schools. Sometimes teachers doing a unit on Asia or Buddhism ask me to come in as a resource. I’ve gone to junior highs and high schools, private schools and several Catholic schools. Teaching in the schools is valuable because there is so much misinformation about Buddhism. When children study about Asia or Buddhism, if they actually meet a person who has lived there or who practices the Dharma, they feel that this is something real. It’s very different from gaining an intellectual understanding through reading a textbook. In schools I talk about how our mind creates happiness and suffering and explain examples, such as how they relate to their parents. My hope is that the kids will begin to think about conflicts they have at home or conflicts they have with friends and reflect on how to iron those out. I try and say something that gives them some kind of skills.

I also teach at local universities; I’m going to Seattle University next week. And I speak at Hospice of Seattle, Jewish youth groups, and various church groups. Often when churches have panels on inter-religious dialogue I’m asked to attend. Going into the wider community to teach is important. One time I even spoke to employees at US West during their lunch hour! Whenever people invite me to speak in the community, I make an effort go. I feel privileged to be a resource for them.

JR: What projects are you working on when you’re in Seattle?

VTC: I’m in the middle of editing quite a number of books. Spiritual Sisters was published privately in Singapore and now I’ve added some articles and will try to get it published in the States.

One of my teachers, Geshe Jampa Tegchok, who is now Abbot of Sera Je Monastery in India, gave teachings on the The Thirty-seven Practices of Bodhisattvas that I have been editing. Snow Lion will publish it. [This has since been published as Transforming Adversity into Joy and Courage: An Explanation of the Thirty-seven Practices of Bodhisattvas. Ed.]

I’m also working on Venerable Master Wu Yin’s teachings on the Vinaya which she gave at the Life as a Western Buddhist Nun conference in India. I’m keen on this because no book in English about the bhikshuni vows is available so far. There’s so little material on Vinaya in English. I want to get that out—and Ven. Wu Yin is encouraging me to do so—because I think it is important to establish the monastic tradition in the West. [This has since been published as Choosing Simplicity: A Commentary on the Bhikshuni Pratimoksha. Ed.] Also at the Life as a Western Buddhist Nun conference, the nuns gave presentations in the evening. I’ve transcribed these and will make them into a volume about the Western nuns, entitled Blossoms of the Dharma: Living as a Buddhist Nun. These nuns have had a wide variety of experiences and come from a wide variety of cultures, so their articles are fascinating.

There is much I want to do in terms of publishing. Editing and writing books are very beneficial because the Dharma will go out to a wide group of people. DFF often sends these books to third-world countries, prisons, and places where people have an interest in Buddhism but no opportunity to learn about it. The written word is an excellent way to give people access to the Dharma and to spread teachings that will help people.

Another project that I have not found time to work on yet is to make a series of CDs with guided meditations on the Lamrim. At the Cloud Mountain retreat I guide meditations on the Lamrim and a number of people have found this helpful. A series of CDs could help people know how to do the analytical meditations properly. In addition, people who can’t come to class, people who come to class but don’t know how to meditate, and people from other countries where they don’t have Dharma centers or teachers could also benefit from this. [This has since been published as Guided Meditations on the Stages of the Path. Ed.]

I also maintain a large correspondence with people from the other places where I teach, with DFF members who write to me about their practice or personal issues, and with monastics who want information and teachings. I correspond with people in Singapore, Ukraine, China, Tennessee, and Mexico, to name a few places. I sometimes wonder if I should be so available, but then I think, some of these people don’t know who else to talk to.

When asked, I send out information about ordination. I try to do whatever I can for monasticism in America because it does not seem widely appreciated in this country. I feel strongly that having monasteries and monastics is vital for the success of Buddhism in America. Monastics dedicate their whole life to the Dharma. Some people have the karma and the predisposition to be monastics and yet where are they going to get training in America? I want to do what I can to help in that direction. [Visit Sravasti Abbey founded by Venerable Thubten Chodron for this purpose.] 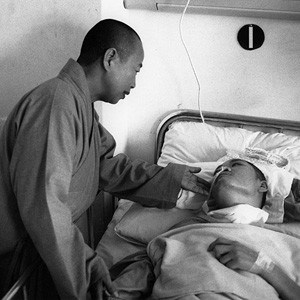 Compassion through the dying process 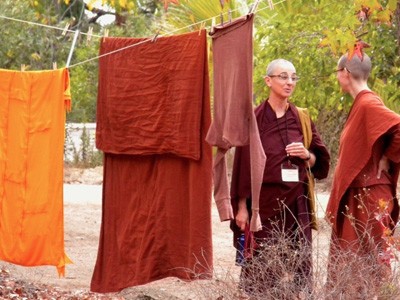 Colors of the Dharma