You are here: Home › Choosing Simplicity 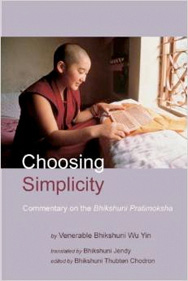 This text is best read by fully ordained Buddhist monastics.

Choosing Simplicity presents the nuns’ monastic life as a living tradition. It describes the meaning and purpose of being a Buddhist nun and explains the precepts according to the themes or topics with which they deal. Venerable Bhikshuni Master Wu Yin, president of Gaya Foundation and founder of Luminary Temple in Taiwan gave the teachings contained in this book to Western nuns at the 1996 program Life as a Western Buddhist Nun, in Bodhgaya, India.

Choosing Simplicity is of interest to monastics and lay followers, women and men. By knowing about the lifestyle of monastics, people’s faith in the Dharma will increase, and they will see that monastics can help and inspire them along the path. Those considering taking ordination will gain a better understanding of monastic life and be able to make well-informed and thoughtful decisions about ordination. Those who are novices will learn the full precepts and be able to train in them before actually receiving them, while those who are fully ordained will understand what to practice and what to abandon on the path, thus enabling them to keep their precepts purely and progress on the path.

“It is of great importance that Buddhist monasticism become firmly established in the West. This excellent book makes a major contribution to this becoming a reality.”
—Pema Chödrön, Director of Gampo Abbey, Nova Scotia

“Until now there has been no comprehensive translation nor commentary on the precepts for Buddhist nuns available in English … Includes fascinating accounts of the history behind the vows and the reasons for keeping them.”
—Venerable Mitra Bishop, Sensei, Resident Teacher at Mountain Gate in northern New Mexico and Spiritual Director of Hidden Valley Zen Center in San Marcos, California

“The book not only helps nurture an understanding of the meaning and value of Buddhist monasticism but also offers essential commentary in simple language for Buddhists in the West who choose a monastic lifestyle.”
—Karma Lekshe Tsomo, Sakyadhita International Association of Buddhist Women