At a dialogue for youths in Singapore, Venerable Thubten Chodron was asked for her advice about how young Buddhist leaders can benefit themselves and others.

How can Buddhist youth leaders today better handle the challenges involved in leading their organizations as to serve the community and spread the Buddha’s teachings more effectively?

Venerable Thubten Chodron, founder and abbess of Sravasti Abbey (Washington State, USA) offered some useful advice during a dialogue with leaders of Buddhist youth groups in Singapore on Sunday.

During the dialogue held at Pureland Marketing (Singapore) Venerable Thubten Chodron, 61, emphasized the importance of cultivating a healthy motivation in order to benefit others and the need to purify one’s mind by developing compassion and wisdom.

Drawing on her personal experience, Venerable Thubten Chodron shared several strategies that Buddhist youth leaders can keep in mind to improve their skills and their practice.

1. Think deeply and set your own priorities 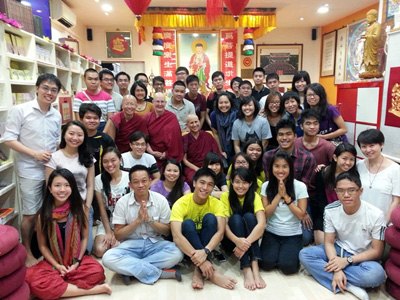 Like all youth, Buddhist youth leaders have to deal with the expectations of family, friends and society in general. (Photo by Sravasti Abbey)

Like all youth, Buddhist youth leaders have to deal with the expectations of family, friends and society in general. Young people are usually subject to heavy doses of social conditioning, and often the expectations of others can impose pressure to take certain courses of action.

But attempting to please everyone simply means that oneself gets lost in the process, Venerable Thubten Chodron noted. The Buddha pointed out that individuals need to think deeply about things for themselves and consider the long-term effects of their actions. Rather than trying to please everyone else, which is an impossible endeavor, youth leaders should develop the discriminating wisdom enabling them to set wise priorities and discern the right course of action in particular situations.

2. Consider the advice of elders and seniors, but make your own decisions

It’s easy to dismiss the “old fogeys who grew up with the dinosaurs” and as Venerable Thubten Chodron commented, a common demand among some youths is “give me the car keys but don’t tell me what time to be home.”

Yet while youths need the space and freedom to experiment and be creative, the also need to acknowledge that their own knowledge and experience is limited.

Consider if a group of youths had the idea of organizing a booze party to attract people to the Dharma: seniors would point out that this would be contrary to the fifth precept, and people coming would not be paying much attention to the Dharma anyway.

So the message to youth leaders is to make their own decisions, but to get input from their seniors who have learned things through experience. After all, as Venerable Thubten Chodron wryly noted, the youths of today will be ‘dinosaurs’ too in forty years time.

Whenever there are two human beings together, there will be different ideas. This is normal and natural. However, it doesn’t have to turn into conflict that involves anger and head-butting. In Singapore, many people tend to avoid directly addressing those whom they are in conflict with, observed Venerable Thubten Chodron, who lived in Singapore from 1987 to 1989. They would rather make nasty comments to others about those involved in the conflict behind their backs, which leads to disharmony that interferes with accomplishing a group’s positive goals.

To manage differing opinions and ideas, youth leaders should discuss areas of difference openly and calmly, rather than gliding over them as if they did not exist. A culture of respect and mutual understanding needs to be cultivated, so people understand that they can have differing ideas, but that there is no need to fight over them.

4. Be flexible with your plans

To prepare for events, some youth leaders may come up with impressive plans, detailing every step of the process towards the achievement of their goals. But thinking that activities will go exactly the way they were planned is an unrealistic expectation. Life simply unfolds in the way that it does, and things can happen when one least expects them to.

Of course, this doesn’t mean that youth leaders shouldn’t think ahead. As Venerable Thubten Chodron advised, it’s good to make plans, but one should be flexible with them.

Youth should recognize that things can change and plans are not cast in stone. Flow with new circumstances as they arise, and always be ready to revise plans whenever necessary. Who knows, what happens may be better than what you had planned!

Some people may make commitments too quickly without thinking things through, while at other times, they may have thought things through, but circumstances change. Then when deadlines approach, the pressure induced by such commitments result in stress and anxiety for everyone concerned.

It’s important to think more deeply about commitments before making them and communicate your commitments clearly to others, remarked Venerable Thubten Chodron. In particular, setting a time commitment can be useful: for example, youth leaders can say, “I’m going to be on the committee of the Buddhist Society for the next year.”

In this way, there is a manageable time-frame in which goals can be set and activities can be planned.

If circumstances change and you are unable to fulfill your commitment, communicate that to others right away.

After you have made a commitment, do your best to maintain that commitment, without allowing self-centeredness to derail you. Go about fulfilling your commitments joyfully.

Buddhist youth groups often need to balance the limited time and resources they have to deliver effective programs and activities. Venerable Thubten Chodron suggested that a youth group can alternate its priorities year by year, for instance, it can focus on one goal for one year, and on another for the next.

Alternatively, the group can divide into small committees; for example, one committee can concentrate on charity work, another on Dharma propagation, and another on study and meditation. This will allow for a more efficient management of resources, increasing the group’s effectiveness.

7. Evaluate monastic and lay teachers before accepting their teachings

Before becoming the student of any monastic or lay teacher, Buddhist should get to know the teacher well first, Venerable Thubten Chodron recommended. After observing the teacher for some time, youth leaders should decide for themselves whether or not to have the teacher give teachings for their groups.

Youth leaders can ask specific questions about prospective Dharma teachers. Who is their teacher, and do they have a good relationship with their teacher? How does the teacher act? Do they practice what they preach? Are they compassionate towards others? Such questions can help an evaluation of their suitability as a teacher for the youth group.

8. Reach out to nominal Buddhist by emphasizing the Buddha’s love and compassion

If Buddhist youth leaders go up to others and say, “We have the Buddha, Dharma, Sangha, and karma, samsara, nirvana” people will respond, “What planet do you come from?”

Instead, youth leaders should bring Buddhism to people by speaking about love and compassion, because everyone understands the language of love and compassion. Everyone appreciates the values of forgiveness and ethical conduct and wants to learn how to cultivate those qualities in themselves.

Venerable Thubten Chodron noted that Buddhism should never be pushed onto others. But we should make the Buddha’s teachings available to anyone who wants to hear them. We shouldn’t be shy about sharing the Buddha’s precious and beneficial teachings with others, and Buddhist youth leaders can help to make this possible.

9. Be sensitive to the differences between people

Individuals have their differences, and Buddhist youth leaders sensitive to this fact. For example, some learn best by seeing (visual intelligence) others by hearing (auditory intelligence) and some by doing (kinesthetic intelligence).

This is why Buddhist groups should ensure that people have access to Dharma books, talks, and other activities, so as to cater to diverse individuals who learn best in different ways.

Gender equality is important, Venerable Thubten Chodron emphasized. When Buddhists translate documents, words like ‘humankind’ should be used, rather than ‘mankind’ and ‘she’ should be employed in addition to ‘he’.

To use only masculine words is equivalent to ignoring all female individuals, and Buddhist youth groups should be inclusive and respectful by promoting gender equality. Women should be as active and noticeable as men in Buddhist groups.

By practicing the Dharma themselves, youth leaders can become more confident in spreading the Dharma to others, Besides cultivating the fundamental motivation of loving-kindness, Buddist youths avoid being trapped by the Eight Worldy Concerns; praise and blame, fame and shame, loss and gain, pleasure and pain.

Young Buddhist leaders should also devote at least some time each day meditating, chanting, or reading Dharma books. Getting in touch with yourself and becoming your own friend by practicing the Dharma is important. Even just ten minutes of meditation, for example cultivating the four brahmaviharas, will plant seeds in one’s mind.

As Venerable Thubten Chodron quipped, if more youths cut down just a little time texting or using Facebook each day, they would have more time to devote to spiritual practice and thus become more effective Buddhist leaders.

The session concluded with the dedication of merit, a group photo, and lots of lively individual discussions.

This dialogue was organized by Camp Lions and Dharma in Action with support from Pureland Marketing (Singapore) and FOSAS Singapore.

To find out more about Camp Lions, visit the Camp Lions blog.