You are here: Home > Practical Buddhism > Prison Dharma > By Incarcerated People > On Compassion > Hermitage
By J. S. B. on Jun 18, 2011 in On Compassion

People ask why, why I picked this particular man. I know exactly why. Yes, he did ignore me like most do—when you are homeless, you become a meaningless component of the cityscape, like a lamp post or a discarded Starbucks cup. But it was the way he ignored me; there were no uncomfortable sideways glances, no quickened steps to get past me. He would casually walk by each morning as I sat at my usual place on the sidewalk, talking on his cell phone, fidgeting with his iPod thingy or just staring straight ahead, totally unaware of my existence. I knew this man had never given the plight of the homeless or poor an inkling of a thought—not a hint of compassion or pity. He was immersed in himself and his comfort. That’s why I did it. I wanted to exist in his life, his world; then look him in the eye and say, “I was here all the time.” Besides, winter was coming; the streets would be cold and the shelters full.

One evening, I followed him from the subway station to his apartment in a nice neighborhood. I didn’t worry that he would notice this shabby old lady following him. This man only noticed pleasant attractive things—expensive cars, beautiful people in designer clothes, trendy bistros. The next morning, after he passed me on his way to the station, I went to his apartment. Picking the lock with a piece of sturdy wire was easy, a skill learned when I was new to the streets and my anger and desperation were fresh and more honed.

His apartment was huge, big enough for a family with two kids; excessive for just one man. In one of the three bedrooms was a walk-in closet, full of boxes, old out-of-style clothing, squash and tennis rackets, and roller blades. The dark corner of this closet would be my space. I didn’t need much. I would be dry and warm. I curled up and fell asleep.

It was actually very easy living in this closet. In the mornings, after he left for work, I would venture out of it. I’d eat some leftover rice or a couple of slices of bread and a cup of tea. After years of living on the street, it didn’t take much food to fill my stomach. I would carefully return everything I used to the exact place it had been. I watched television, but quickly saw just how ridiculous it was, after not watching it for so many years, and I stopped turning it on. In the evenings, before he would return from work, I’d eat again before returning to my closet.

It was such a luxury to bathe and use a toilet. Some days, I would lie in the tub for an hour, the warm water relaxing my tired bones and muscles. I found a couple of spare toothbrushes in a drawer. Brushing my teeth was painful at first and my gums bled, but soon it was just wonderful to have clean teeth. Afterwards, I would carefully and completely wash and wipe dry the tub and sink and return everything to its exact place. Yes, my life in the closet was very comfortable.

This man had many books. A whole wall of books. There were classics and best sellers, but he never seemed to read any of them. There was never an empty slot on the bookshelves, never an open book by his easy chair or on his nightstand. He was one of those people who liked having books, not to read but to impress others and to appear knowledgeable. I started reading his books. One day, up on a high shelf, I found a book about Zen. It was almost new. I could tell he had never read it. Maybe he heard about it from a friend or had read a review of it in a newspaper. Maybe he read the first few pages and quickly became bored. This was not a spiritual man. 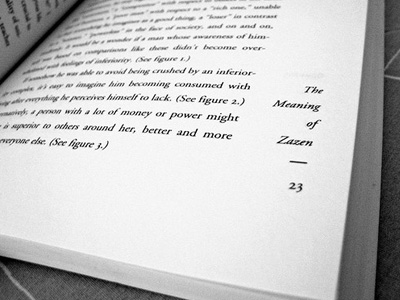 That book became my life. For the next several months, I read and re-read that book of Zen. (Photo by miheco)

That book became my life. For the next several months, I read and re-read that book of Zen. I began to meditate for hours every day and gradually, my mind became clearer, no longer clouded by anger and desire. I became transformed, living in that closet.

I had been there for over a year when he finally discovered me. It was a Saturday afternoon when he finally had to acknowledge my existence. Weekends were always more difficult because I never knew how long he would be gone when he left. I was just gazing out of the window in the living room lost in my thoughts when I heard his key in the lock. Before I could race back to my closet, the door opened and the man stood there, staring at me. At first he seemed confused, but then, he quickly became angry and asked, “Who are you and how did you get in here?” “I live here,” was all I said as I led him to my closet.

The police came and took me away. The man pressed full charges against me. Now I wait in this jail for my sentencing. I am dry and warm and I still meditate for hours each day. The man did not realize compassion because of my existence in his closet. He is still selfish and materialistic. But, I learned. I have compassion for that man, for how he leads his life, for his misguided efforts to find happiness. I entered that closet hoping to teach that man love and compassion. I left that closet finally realizing love and compassion for myself. That closet was my hermitage.