Several years after the monks’ order was established in India in the sixth century B.C.E., the Buddha set up the nuns’ order. Three levels of ordination exist for nuns: sramanerika (novice), siksamana (probationary), and bhikshuni (full ordination). These are taken gradually in order to prepare and accustom one to keep the full precepts and to assume responsibility for the well-being and continuation of the monastic community. The bhikshuni ordination lineage is important, for one becomes a nun by taking the ordination from those who have received it, and in this way, the purity of the transmission is traced back to the Buddha himself. Women are to receive bhikshuni ordination from a community of at least ten bhikshunis, and, at a separate ceremony later the same day, from a community of at least ten bhikshus (fully ordained monks). In lands where such a large number of monastics does not exist, communities of five can give the ordination. 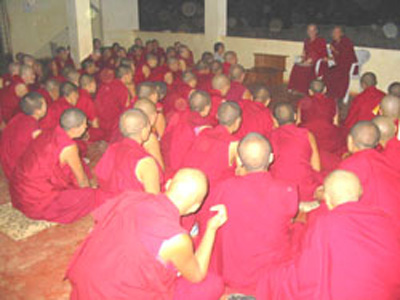 The bhikshuni ordination lineage is important, for one becomes a nun by taking the ordination from those who have received it, and in this way, the purity of the transmission is traced back to the Buddha himself.

The bhikshuni lineage flourished in ancient India and, in the third century B.C.E., spread to Sri Lanka. From there it went to China in the fourth century C.E. Due to warfare and political problems, the lineage died out in both India and Sri Lanka in the eleventh century C.E., although it continued to spread throughout China and to Korea and Vietnam as well. The bhikshuni lineage was not established in Tibet due to the difficulties of crossing the Himalayan Mountains. A sufficient number of Indian bhikshunis did not go to Tibet, nor did a sufficient number of Tibetan women go to India to take the ordination and return to Tibet to pass it on to others. However, there are a few historical records of a few bhikshunis in Tibet receiving their ordination from the bhikshu sangha alone, although that never took hold in Tibet. Nowadays, monks in the Tibetan community give the sramanerika ordination. The bhikshuni ordination was never extant in Thailand. In Thailand and Burma, women receive eight precepts and in Sri Lanka they receive ten precepts. Although they live in celibacy and wear robes demarcating them as religious women, their precepts are not regarded as any of the three pratimoksa ordinations for women.

As Buddhism spread in ancient India, various vinaya schools developed. Of the eighteen initial schools, three are extant today: the Theravada, which is widespread in Sri Lanka and Southeast Asia; the Dharmaguptaka, which is practiced in Taiwan, China, Korea, and Vietnam; and the Mulasravastivada, which is followed in Tibet. All of these vinaya schools have spread to Western countries in recent years. Considering that the vinaya was passed down orally for many centuries before being written down and that the various schools had little communication with each other due to geographical distance, it is amazing that the vinaya is so consistent among them. Slightly different variations of the listing of the monastic precepts exist, but no major, glaring differences appear. Of course, over the centuries, the schools in each country have developed their own ways of interpreting and living in the precepts in accord with the culture, climate, and social situation in each place.

Given recent improvements in communication and transportation, the various Buddhist schools are now in more contact with each other. Some women who are eight- or ten-precept holders in countries where the bhikshuni sangha does not currently exist wish to receive that ordination. In 1997, eight women from Sri Lanka received the bhikshuni ordination from a Korean sangha in India, and in 1998, twenty women from Sri Lanka received it in Bodhgaya, India, from Chinese bhikshunis and bhikshus. The bhikshuni ordination was given in Sri Lanka in 1998, and while some Sri Lankan monks opposed this, many prominent ones supported it. Since the early 1980s, a number of Western women trained in the Tibetan tradition have gone to Taiwan, Hong Kong, Korea, or in more recent years to the USA, France, or India to receive the bhikshuni ordination. As far as I know, only one Thai woman has received it and only a handful of Tibetan women.

A synopsis of the issues concerning bhikshuni ordination

These women would like the support of the monks in their traditions to introduce or re-establish the bhikshuni lineage. The monks have various concerns about this:

In response to these questions, research so far reveals that:

These vinaya concerns are important, but some other, unspoken, issues may be at play regarding the introduction or re-establishment of the bhikshuni ordination in various places. For example, how does one tradition feel about taking on a lineage from another, thus acknowledging that their own tradition was lacking in some way? How do political issues on a governmental level influence attitudes on this matter? With both the male and female sanghas coming to exist in one place, how will the economic conditions of the monasteries be affected? How will the relationship between monks and nuns change when both are fully ordained? Will the new bhikshunis be able to receive proper training from the monks and support from the laypeople in their own countries?

The existence of the sangha community of both bhikshus and bhikshunis establishes a place as a "central land," one where the Dharma is flourishing. Both monks and nuns can contribute in myriad ways to the well-being of a society and its citizens, for tremendous value exists in receiving and observing precepts for the benefit of all beings. Thus, many of us pray that full ordination will be available to both men and women and that everyone will work together to meet whatever challenges arise.