Wong Li Za of The Star spoke with Jetsunma Tenzin Palmo on her efforts to provide education and training opportunities for female Buddhist practitioners.

It was the start of the rock ‘n’ roll mania, just before the hippie era, and Diane Perry was a young librarian in London who adored Elvis Presley.

But that was, in her own words, “another lifetime” ago.

Now Perry, 63, is Drubgyu Tenzin Palmo,1 a Tibetan Buddhist nun who spent 12 years meditating in a small cave up in the Himalayan mountains and founded a nunnery in northern India.

Drubgyu Tenzin Palmo: “We want to equalize things more so that in future there would be female teachers and masters.”

So how did Tenzin Palmo’s path in life take such a different turn?

“I came across a book about basic Buddhism by John Walters entitled The Mind Unshaken.

“I liked the title because living in the middle of the city can be wild and filled with madness where one needs a ‘mind unshaken’,” said Tenzin Palmo when interviewed in Kuala Lumpur recently.

Tenzin Palmo and her brother were brought up in East London by her mother. Her father died when she was two. She remembered a pleasant childhood and adolescence, and growing up in a spiritual environment.

“My mum was a spiritualist at that time. There was this lady, equivalent to a medium here, who would come to our house every week and our neighbors would seek her help such as contacting a son killed in the war,” Tenzin Palmo recalled.

Although she was generally contented with her life, she was also searching for the meaning of existence. After becoming a Buddhist at the age of 18, she felt she needed to find a teacher, which in London was very difficult to do in those days.

“So India was the obvious choice,” she said.

Two years later, at age 20, she made her way there and eventually met her Tibetan guru, the eighth Khamtrul Rinpoche. 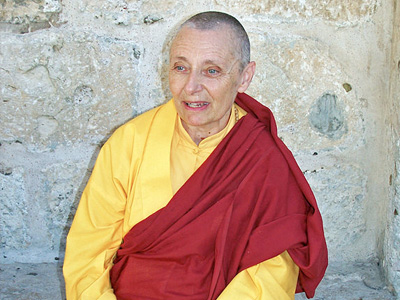 Tenzin Palmo became one of the first few Westerners to be ordained a Tibetan Buddhist nun. (Photo by Tgumpel)

Tenzin Palmo studied under her guru for six years and became one of the first few Westerners to be ordained a Tibetan Buddhist nun. Her name means “glorious one who holds the doctrine of practice lineage”. After the six years, Rinpoche then sent her to the Himalayan valley of Lahaul to a small monastery for more intensive practice, where she remained in retreat during the long winter months.

Then her guru told her to further practice her meditation and that’s when she decided to seek more seclusion in a small cave in the Himalayans, where she stayed for 12 years, the last three in strict retreat.

Asked what was the most difficult moment during those long years, Tenzin Palmo paused before answering: “I suppose it was when I was caught in a big snowstorm for 10 days.

“Everything got covered. There was an avalanche and many villagers died. My cave was completely covered too and I was trapped inside.

“I was initially worried, because my cave was very small, that I would run out of oxygen and suffocate. I thought, “Okay, now I am going to die, so what was it that really mattered?'”she recalled.

When she narrowed it down, she said it was Lama Rinpoche, her teacher, who was at the top of the list.

“So I prayed to him to take care of me in this lifetime and the lifetimes to come. Then I heard his voice inside me saying, ‘Dig out’,” she said slowly.

Painstakingly, she tunneled her way out and up the cave. However, when she finally found an opening, there was still a blizzard outside so she went back down. She had to make her way up a few more times before finally the storm subsided.

“But I was calm (about the whole thing ) and I did not panic,” she said about her ordeal.

In 1988, Tenzin Palmo finally came out of her retreat because she felt she needed to reconnect with Western culture. She decided on Italy, where some of her good friends had gone, and taught at various Dharma centers there.

“There were a lot of religious groups there and a lot of people were interested in Indian spirituality. It was just outside of Assisi, a beautiful place, and not like you landed in the middle of Manchester.”

Throughout the years, she also felt strongly about one issue—prejudices against women in Buddhism.

“The feeling is that traditionally, if you were born into a female body, pray hard, be good and next time, one could come back in a male body.

“The only reason for this previously was females did not get the opportunity and freedom to study and practice. There were also not many examples of women practitioners,” explained Tenzin Palmo.

She added that some lamas still maintained that one could not achieve enlightenment in a female body.

“That is not fair and is demeaning to women and creates low self-esteem among them,” she said.

“Buddha himself did not say one could not achieve enlightenment in a female body. However, according to some later texts, a woman could attain Nirvana and realization but not attain unsurpassed enlightenment as a Buddha.”

She added that in Tibetan tradition, almost all lamas, great teachers and authors were male, even though in Tibetan society, women were very strong.

“We want to equalize things more so that in future there would be female teachers and masters,” she said, adding that such prejudices have since been reduced, especially among Tibetans as they meet nuns from both the West and East who are highly educated.

Before Tenzin Palmo’s guru died in 1980, he had on many occasions asked her to start a nunnery but it wasn’t until she returned from Italy to India in the early 1990s that she began the project.

In 2000, Tenzin Palmo founded the Dongyu Gatsal Ling Nunnery to give education and training opportunities to women from Tibet and the Himalayan border regions.

“It’s to bolster their sense of self worth, which is quite low because society directly and indirectly gives them the message that they are inferior.

“Even His Holiness the Dalai Lama apologizes for this,” she emphasized.

“So the first thing is to educate the women, to give them the confidence so that they believe in each other.”

Dongyu Gatsal Ling, or Delightful Grove of the True Lineage, is located in Tashi Jong in the state of Himachal Pradesh, northern India. It is situated six kilometers from Tenzin Palmo’s late guru’s Khampagar Monastery.

Construction of the 2.8ha nunnery, where study and retreat centers are being built, is still ongoing. A traditional Tibetan temple is also in the pipeline. To date, funds have come in the form of small donations from all over the world. For the nunnery to be fully completed, Tenzin Palmo estimated that it needed another half a million US dollars (RM1.87mil).

Her life story can also be read in a book entitled Cave in the Snow, written by Vicki Mackenzie, which has generated much support for the nunnery project.

At present there are 38 nuns at the nunnery who come from the Himalayan border regions of India, Bhutan and Nepal. Each student spends six years practicing meditation and studying Buddhist philosophy, ritual, English and other practical skills. When fully completed, the nunnery can accommodate around 100 students.

“We train them so that they can realize their innate intellectual and spiritual potential,” added Tenzin Palmo.

One of the main aims of the nunnery is also to revive the ancient tradition of the female monastic Togdenma (literally meaning “realized one”), associated with the Drukpa Khamtrul Rinpoche lineage. This lineage of female yogic practitioners dedicated to enlightenment is hoped to result in a pool of qualified female meditation teachers in the Tibetan tradition.

“It takes an enormous amount of work and dedication to practice meditation.

“It’s like baking a cake. You put all the ingredients in the oven but you can’t keep taking it out. You need to leave it in for a certain amount of time.

“The problem in Tibetan Buddhism is a lot of teachers are not well-trained as they used to be in meditation practice. It takes 15 to 20 years of meditation retreats, usually alone, and is a lot of hard work,” she said, adding that now, many come out of retreat after three years.