Vaidurya: How would you describe your married life before becoming a nun?

Venerable Thubten Chodron (VTC): I was happily married to a man who was an attorney. He worked for an organization that provided legal aid to the poor, so we had similar values and interests in service work. Although my life appeared good, I still had many spiritual questions that the Judeo-Christian tradition could not address in a way that made sense. The idea of a creator God was illogical to me, and I had ceased to believe in God. But I was still trying to figure out the meaning of life. I knew it had something to do with benefiting others, but still felt that my path in life was not clear. We had been married three years when we met the Dharma and became Buddhists.

Vaidurya: In retrospect, what do you think you have gained/learned from your married life? Is there any difference in joining the order after having been married vs. joining without the experience of married life? Do you see the ordained life differently because of this?

VTC: I had everything—a loving husband, a comfortable life, a career as a teacher which I enjoyed, a wonderful family, and lots of friends. This experience showed me very clearly that there is no lasting happiness to be found in cyclic existence. Despite my prosperity, inside I felt, “What’s the use of all of this? When I die, I’ll have to separate from everyone and everything. There’s got to be more to life than this; there has to be something of profound value and meaning.” 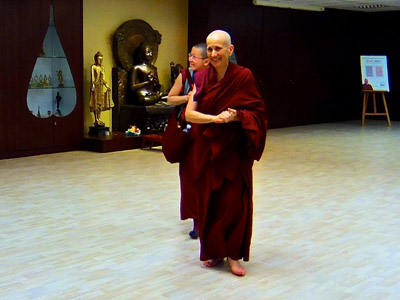 Freeing our minds from attachment is what brings real joy and peace. For that reason, Dharma practice is important. (Photo by Sravasti Abbey)

Thus, when I ordained, I knew exactly what I was renouncing and didn’t feel a loss. Of course, attachment still lingers on, but when it arises, I just recall that I had everything samsara could offer before I ordained and that having what we’re attached to doesn’t bring satisfaction. Freeing our minds from attachment is what brings real joy and peace. For that reason, Dharma practice is important.

The experience of married life also taught me that the way the media promotes romance in movies, TV, and advertising is total fantasy. So many people nowadays have exaggerated and false expectations of marriage, which bring much disappointment and either divorce or a miserable marriage later on. People expect that one other person will fulfill all their needs and wishes. That’s impossible! Marriage should be based on friendship and the genuine wish for the other person to develop their good qualities, including spiritual qualities. Seeking the thrill of romance and sex only leads to pain in the long run.

Vaidurya: In one of your articles, “You’re becoming a What? The Story of an American Buddhist Nun,” you mentioned: “Although many people can live a lay life and practice the Dharma, I saw that for me it would be impossible, simply because my afflictive emotions were too strong and my lack of self-discipline too great. Ordination seemed to be the best thing for my type of personality.” Many lay Buddhists face the same problems/defilements as well. Would you also advise the same approach to practice?

VTC: That depends on the person. Ordained life is not for everyone. For some people, being a good lay practitioner is better. Everyone has to decide to him- or herself.

Vaidurya: To be able to make the decision to ordain doesn’t seem to be easy and most probably require a lot of determination. What do you think was your strongest motivating force?

VTC: As the Buddha advised, I meditated on the value and rarity of a precious human life and on impermanence and death. It became clear to me that if I lived as a lay person with everything I was attached to, my mind would be overwhelmed by competitiveness, jealousy, arrogance, and hostility. With those emotions I’d create so much negative karma and that’s what would come with me to my next life. If, due to my afflictions and karma, I was born in a lower realm in my next life, there would be so much suffering. I wouldn’t be able to help myself let alone to be of benefit to anyone else. On the other hand, if I took and kept vows, I would abandon so many negative actions, accumulate merit, tame my mind, and develop my good qualities. Even though a handful of people may be unhappy about me ordaining in this life, in future lives I would be able to bring them and many more people more happiness and a better type of happiness—Dharma happiness that comes from following the path—by developing myself spiritually.

Vaidurya: Was it a difficult decision and process to leave your then husband to become a nun? Does a happy married life make this decision all the more difficult?

VTC: For me, there wasn’t a difficult decision to make. My mind was clear about what was best to do. I feel a happy married life made it easier, because I didn’t have the emotional wounds of a painful marriage to recover from, nor was I trying to escape from a bad situation. Rather, I was going towards something that would benefit myself and others in the long term, over many lives.

My husband was very kind and did not try to stop me. Nor did he make obstacles for me. I am very grateful to him for this. While he understood and supported my spiritual goals, he also felt, “Oh no, the person I love is leaving!” Although it was difficult for him, he used the Dharma to help him deal with his attachment. Now we see each other occasionally at Dharma gatherings and are friendly. His wife is very nice to me.

Vaidurya: How does one who wants to join the Order deal with spousal opposition?

VTC: With kindness, patience, and compassion.

Vaidurya: For those who have children (teenagers and below), other than managing their reactions, how should one manage one’s sense of responsibility and perhaps even guilt towards leaving them?

VTC: When people with children inquire about ordination, I usually recommend that they wait until their children are at least 18 years old before they join the Order. In a few exceptional cases, it’s clear that the parent is ready to ordain, and the situation with the children is okay. However, parents are generally very attached to their children, especially when they are young, and this attachment can create obstacles in their practice unless they develop a lot of mental clarity about the situation before ordination.