From Essence of the Heart Sutra: The Dalai Lama’s Heart of Wisdom Teachings, translated and edited by Geshe Thupten Jinpa, Wisdom: Boston, 2002, pp. 80-82.

If we carefully analyze the ethical teachings, precepts, and practices of monasticism, we will see that opportunities are given to both male and female practitioners equally. In the Vinaya there is a tradition of full ordination for both women and men; and, with regard to the actual precepts each takes, there is no understanding that one set of precepts is higher than the other. Although, because of the cultural biases of ancient India, fully ordained men, or bhikshus, were considered senior to fully ordained women, bhikshunis—but there is no hierarchical difference between the vows themselves. 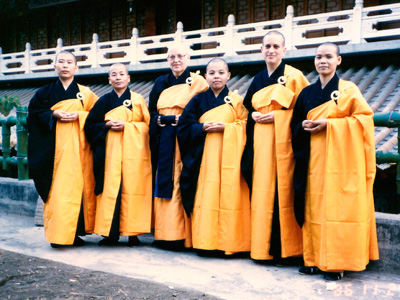 In the Vinaya there is a tradition of full ordination for both women and men.

I feel that since there is no discrimination based on gender in the actual teachings, the aspects of the Vinaya that do reflect the gender bias of a given society and time need to be examined carefully, and possibly reconsidered. There may be areas where reforms and modifications are necessary. For example, in the Tibetan monastic tradition, we follow what is called the Mulasarvastivada Vinaya tradition, according to which a full-ordination ceremony for women can only be conducted through a gathering of both fully ordained men and fully ordained women. Now it just so happens that the order of fully ordained women in this Vinaya tradition has become extinct; and, since the existence of ordained women in this tradition is a necessary condition for ordaining women in this tradition, this fact effectively meant that it was not possible for women to receive full ordination in the Vinaya tradition we follow in Tibetan Buddhism. (Footnote 17, not on gender, is on the different vinaya traditions.)

Although I am sympathetic to those who would correct these inequities, changes to the Vinaya can only be made collectively by discussion and consensus; this is not a matter that can be decided by a single individual. Furthermore, since Vinaya practice is common to many Buddhist denominations, such as Theravadin, Tibetan, and Chinese, the issue of modifying the practices needs to be discussed across traditions. Once the members of the various traditions have undertaken a thorough study of their own traditions to determine what the general rules and exceptions are, we can then collectively examine how best to respond to the changing times and cultural contexts. This is a question that requires serious thought.