You are here: Home > Monastic Life > Buddhist Nuns > Bhikshuni Ordination > Tibetan Tradition > Research regarding the lineage of bhikshuni ordination
By Committee of Western Bhiksunis on Apr 4, 2006 in Tibetan Tradition

March 16-18, 2006, the Committee of Western Bhikshunis met at Sravasti Abbey to research the possibility of the introduction of the bhikshuni ordination into the Tibetan Buddhist tradition.

This paper was written in response to two papers by Venerable Tashi Tsering of the Department of Religion and Culture in Dharamsala in which he raised several questions. It was also written in preparation for a meeting of Tibetan Vinaya scholars which the DRC is organizing and at which some members of the CWB will be present. The CWB was formed after His Holiness the Dalai Lama said to Bhikshuni Jampa Tsedroen in August, 2005, that the Western bhikshunis should be active in researching bhikshuni ordination and practice and making contact with monks and nuns of our own and other Buddhist traditions who are interested in this.

Tibetan translation of this article (PDF)

A. Question: Is it possible to establish full bhiksuni ordination in accordance with the Mulasarvastivada Vinaya tradition that flourished in Tibet?

Yes, the bhiksuni ordination could be performed in one of two ways:

The Buddha allowed bhiksus to ordain bhiksunis as shown by the following Vinaya quotations:

In this case, bhiksus of the Tibetan Mulasarvastivada Vinaya tradition alone could conduct the bhiksuni ordination. 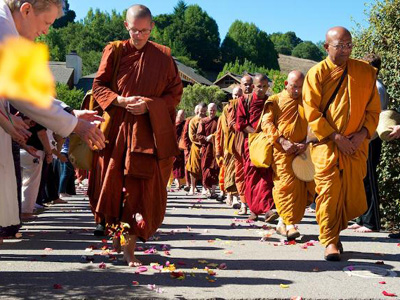 There exists no obstacle to conducting a bhiksuni ordination for nuns in the Tibetan tradition. (Photo by Sravasti Abbey)

B. Question: To transmit the precepts, one must have those precepts oneself or have precepts that are higher than those. Is the Bhiksu Sangha alone, then, allowed to transmit the bhiksuni precepts?

C. Question: Is it possible for Tibetan nuns to receive full bhiksuni ordination in accordance with the Dharmagupta Vinaya tradition that flourished in China, Korea, Taiwan, Vietnam, etc.?

D. Question: Are there clear records indicating that the bhiksu and bhiksuni lineages exist unbroken in East Asia?

The Chinese master Dao-hai (Tao-hai) asserts that “In a word, the lineage of bhiksuni ordination in China has clearly been broken (to receive base rules from a sangha consisting of bhiksunis only, not to mention receiving 1-group ordination from bhiksus) during Sung Dynasty (around A.D. 972).”26 This assertion is refuted by clear documentation. During the Northern Sung dynasty, Emperor Tai-zu began a persecution of Buddhism and prohibited bhiksunis from traveling to bhiksu monasteries to receive ordination. However, this prohibition was not in effect for long. After Emperor Tai-zu died in 976, his son Tai-zong came to power and was well disposed toward Buddhism.27 This can be proven from historical records documenting that Tai-zong established an ordination platform in the year 978. Additional ordination platforms were erected in 980, 1001, 1009, and 1010.28) The year 1010 was especially important, because 72 ordination platforms were erected throughout the country.

E. Question: How should the siksamana ordination be performed?

F. Question: Is there one bhiksuni lineage in China or two?

There is one bhiksuni lineage in the Dharmagupta tradition, not two.

The lineage that began with Ching Chien (Jing-jian) was strengthened through the re-ordination of the bhiksunis by a dual ordination ceremony conducted in 434 C.E by bhiksunis from Sri Lanka, together with Chinese bhiksus, headed by Sanghavarman. This was done to remove the doubts of the nuns who had earlier been ordained by bhiksus alone and who questioned whether the ordination they had received from bhiksus only was sufficient. The history of how the bhiksuni lineage, starting with Mahaprajapati, was transmitted from India to Sri Lanka by King Asoka’s daughter Sanghamitra, and was then transmitted by Devasara and eleven other bhiksunis from Sri Lanka to China, is well documented and can be requested from the Board of Sri Lanka Bhikkhuni Order.

G. Question: Are Documents Available that Record of the Lineage of the Dharmagupta Bhiksuni Vinaya?

H. Question: Are bhiksuni ordination ceremonies as conducted in East Asia done in compliance with instructions set out in the Dharmaguptaka Vinaya?

The discrepancy between the practice in early times and today is easy to explain. It is true that, at the time of the Buddha and when the Vinaya texts were compiled, writing was not common in society. Therefore, the texts were transmitted orally, by memory, at that time. In modern Taiwan, it is considered appropriate for the precept master to read certain parts of the ritual aloud during the ordination procedure, although the candidates must learn the rituals by heart and are not allowed to rely on any texts during the rite. They either recite the appropriate sections of the text by heart or repeat them after the master. Learning portions of the texts by heart is an integral part of the preparation of candidates during the thirty or forty-five days of the Triple Platform Ordination Ceremony. Western candidates for bhiksuni ordination are also asked to learn certain parts of the rite (for example, the questions about the hindrances) by heart.

It is clear that a living lineage of bhiksunis exists today, with over 58,000 bhiksunis in China, Korea, Taiwan, Vietnam, and elsewhere. This lineage dates back to Buddha Sakyamuni and the first nun, Mahaprajapati. The lineage was transmitted from India to Sri Lanka by Sanghamitra, and then from Sri Lanka to China by Devasara, where it merged with the already existing lineage of bhiksunis who had been ordained by bhiksus only. The lineage then flourished in China and was transmitted from there to Korea, Taiwan, Vietnam, and other countries. Although it is true that not every bhiksuni ordination has been performed in a dual ordination procedure, it is an indisputable fact that the Chinese bhiksuni lineage has continued unbroken and flourished until the present day. Therefore, there exists no obstacle to conducting a bhiksuni ordination for nuns in the Tibetan tradition.

See also the Committee for Bhikṣuṇī Ordination in the Tibetan Tradition.

Adapting to changes
Grouchy me