Excerpt of His Holiness the 14th Dalai Lama’s speech on the geshe-ma and bhikshuni issue during the First Conference on Tibetan Buddhism in Europe on August 13th, 2005 (including the introduction on this topic by the moderator).

For a long time now His Holiness the Dalai Lama has been trying to bring together the Buddhist sangha to revive the bhikshuni ordination. I do not need to go into the details, because we do not have the time. But as far as I can remember some time in the early 80s His Holiness started with this when Karma Gelek Yutok was the secretary of the Department of Religious Affairs (now: Department of Religion and Culture = DRC). His Holiness appointed Geshe Tashi Tsering to do some research in the validity of the bhikshuni vow in Taiwan, and three books came out in Dharamsala in 2000. The DRC distributed these three books, which came out of this research, in 2001. I am not sure, whether it was all the research. Anyway, His Holiness did everything possible in order to bring together the different Buddhist groups, so that we can have a conference and then come to some conclusion to revive this [bhikshuni ordination]. We have to understand that the Tibetans cannot make a universal declaration saying: We are going ahead, we are going to do it, because we have to follow the Vinaysutra. The bhikshuni vow has to do with the teachings related to the Vinaysutra. Just like in the United Nations when they want to take action, there are 500 members who need to have consensus. Without consensus they cannot act. In the same way, what happens in Buddhism, all the bhikshus, especially those who are responsible and highly respected in their communities, must come together and then decide whether this could be revived or not. Therefore we Tibetans cannot just unilaterally declare that we are going to do it, because I suppose this would create more problems in future. So it is important that we invite the bhikshus and the important people from Sri Lanka (which is the largest Buddhist country), from Thailand, and if possible from Burma, even though the political situation is difficult there.

Therefore I would like to ask the gathering today to discuss this, so that at the end of the day we can have a declaration or we can write a letter to these communities to join us in a conference whenever it will happen. This is the best way. So we can have a consensus. And then there will be no ill feelings, there will be not any alienation among the Buddhist communities. This is very important. We need to have consensus. The Tibetans cannot make it unilateral. This has to be multilateral. I am sorry when I use this particular words, but this is how it is.

One important point is the restoration of the bhikshuni vow. For many years we have been very seriously trying to improve the situation of the Tibetan nuns. Firstly in the Tibetan community we have been giving the nunneries every encouragement to start a higher quality of study, such as in the big monasteries. So now there are already some positive results. At least in three or four nunneries in India their standard of knowledge in Buddhist philosophy is very good. Now we are in the process of finalizing the final examination of a geshe-ma (translator: which is equivalent to the geshe). (His Holiness is pointing to somebody left to him, Ven. Jampa Tsedroen, one of the speakers of the conference.) So you should stay some time in India and then should be a geshe-ma. (His Holiness laughing.) Or study in Hamburg and then on one occasion you can join our big debate (translator: Tibetan examination) and then we will know what the quality or the standard of knowledge is in the Hamburg institution. (His Holiness laughing.) These things have been taking place within our own boundary (i.e. Within the sphere of of our own Tibetan Buddhist tradition).

Now, as for bhikshunis, as Geshe-la told us, among the Buddhist countries where the Vinaya tradition is still alive, as in Thailand, Burma and Sri Lanka, there are no longer bhikshunis. They only exist in the Chinese tradition. And recently I met one Vietnamese. He told me that in the Vietnamese Buddhist tradition the bhikshuni vow lineage is very authentic. I was told. I don’t know. In the Chinese case in one monastery in Taiwan they carry out the ordination of bhikshunis. Actually one meeting took place there on my second visit to Taiwan. One Chinese bhikshu stressed the importance of reviving the bhikshuni vow in other traditions. At the same meeting, after our meeting, one old Chinese bhikshu told another Tibetan lama, a very high Sakya lama, Khenpo Kunga Wangchuk Rinpoche, that he was a little reluctant to carry out or revive the bhikshuni vow from the Chinese tradition. So I don’t know. [That means that there could be some reluctance within] the Chinese themselves, as with this senior Chinese Buddhist monk.

And also I met some Buddhist Gesnyen-ma—female [lay practioner] (upasika) from Sri Lanka and also from Thailand. They told me that in Thailand and Sri Lanka nowadays there is the desire among women to revive the bhikshuni ordination. So it seems in these countries, too, the situation is changing. But it seems [if I may say that, it may be too blunt, but] I think because of a certain degree of predomination of the bhikshus in Sri Lanka or Thailand the opinion of the upasikas may not yet be very manifest (Tib.: mi mngon pa) or established in public awareness. I think because of that their voice is not yet coming out seriously. It seems that some kind of negligence is occurring in this area.

So now I think the time has come. From our side, in the Tibetan case, we have already started serious research work on this. We have a translation of the bhikshuni Pratimoksha Sutra from Chinese to Tibetan and other similar materials. (Perhaps His Holiness is referring to the bhikshuni ordination ritual which has been translated from Tibetan to Chinese too.) So with this material I feel the time has now come.

We need somebody who will actually carry out this work specifically, not just some kind of expression, some sort of declaration or resolution at one meeting. That is not sufficient. I think we should set something up. Recently some Tibetan nuns in India have also been thinking seriously about how to carry out this work. That is good. Now, I prefer not Tibetan Ani-las, but Western Buddhist Ani-las. I think that they— I think if you [Western nuns] carry out this work, it may be more effective (His Holiness again points to Ven. Jampa Tsedroen). For example: it is questionable whether we Tibetans will even be able to get a visa to visit Sri Lanka or Burma, or even Thailand is difficult. I think it is easier for you foreigners. So now I think that one body should be specifically responsible for this task and then go to these different places for further sort of research. And meantime discuss with senior bhikshus. I think that, first, senior bhikshunis need to correct the bhikshus’ way of thinking.

Now this is the 21st century. Everywhere we are talking about equality. Recently I said: whether among Tibetans, Chinese or among Europeans, I think we can find a bigger number of females who are really showing interest in religion and particularly in Buddhist Dharma. Like in the whole Himalaya region. When I give teachings there the males are fewer, the females are more. I didn’t notice during the recent teachings, I think maybe the majority were females. (His Holiness referring to the organizers) How was it? Were there more? (Diego Hangartner: almost the same; His Holiness: Were there more? Did you notice? I couldn’t count from there, that is different. Laughing in the audience.)

So naturally [it is] the females’ right. Basically Buddhism needs equality. Then there are some really minor things to remember as a Buddhist— a bhikshu always goes first, then a bhikshuni. I see that as minor. The key thing is the restoration of the bhikshuni vow. So first educate some important sorts of senior monks, such as in Burma, Thailand, Sri Lanka. Then [contact] some influential respected sangha leaders having some kind of awareness, interest. Finally we should have some kind of international Buddhist conference, a Buddhist sangha conference, and discuss the issues, and then make some kind of universal resolution or declaration. I think then things will become very clear, very authentic.

Actually, I suggested this to some Taiwanese bhikshus giving the bhikshuni ordination on several occasions at least. I told them, but I don’t know whether their side is less effective or no longer interested.

Therefore I think now the time has come, we should start some kind of working group, a committee, and carry out the work, and go to different places. So again: going to these places, you cannot just go with a begging bowl. You need some money. Naturally all our bhikshunis are not very rich (laughing). So I would definitely like to give you some donation from the royalties of my books. For sure, you know, I never wrote these books with the aim of making money, but now it seems, automatically money is coming. So there is no harm, o.k. (laughing). I would like to set up some kind of small fund. Then if there is some kind of active body, then go and discuss wherever it is necessary. Then I think some concrete result will come. Otherwise it will just go on and on. Whenever we have the opportunity: just yes, yes, yes and then nothing happens. Like that. 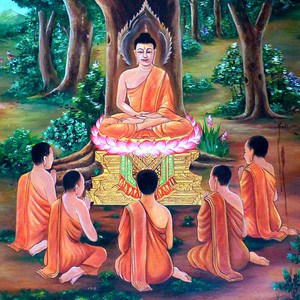 Precepts and their background 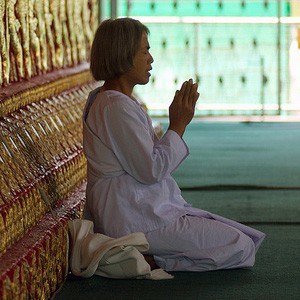