Venerable Thubten Chodron and Venerable Chonyi report on the recent 17-day course at Sravasti Abbey that was attended by nuns from several Buddhist traditions.

An important moment for American Buddhism took place at Sravasti Abbey from January 22 to February 8, 2018, when 49 nuns gathered for “Living Vinaya in the West.” The 17-day course was an experience in learning and living the Vinaya—the monastic ethical code that includes advice the Buddha gave 2500 years ago to guide, govern, and support harmonious monastic communities. 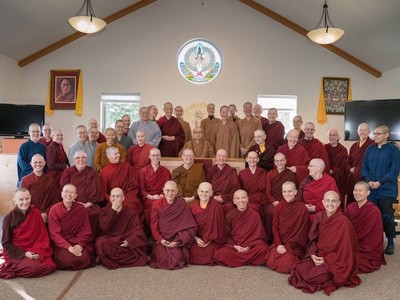 Venerable Bhikshuni Master Wuyin, abbess and president of Luminary International Buddhist Society (LIBS) and Abbess of Luminary Temple in Taiwan, was the guest teacher. She was supported by six bhikshunis (fully ordained nuns) from her community who served as instructors and translators. Sravasti Abbey founder and abbess Bhikshuni Thubten Chodron also taught from her experience in establishing the Vinaya in an American monastery.

Venerable Chodron first met Venerable Master Wuyin in 1995 when she traveled to Taiwan to request her to teach Vinaya for “Life as a Western Buddhist Nun,” the first education program for Western (and Tibetan) nuns, held in Bodh Gaya, India. Venerable Master Wuyin’s teachings from that course were later edited and published as Choosing Simplicity, a practical commentary on the bhiksuni precepts. The aspiration for a follow-up course began there. Twenty-two years later, “Living Vinaya in the West” came to fruition, and like its predecessor, it was a first.

“Living Vinaya in the West” was historic in several ways. It is likely the first such Vinaya training offered in the United States for Western nuns. In addition, it featured the first ordination of a novice nun (who received the sramanera and siksamana precepts) to be conducted by an all-Western, English-speaking sangha in the Dharmaguptaka Vinaya as practiced at Sravasti Abbey. Previous ordinations at the Abbey have included the support of senior monastics from the Chinese Buddhist tradition.

Venerable Master Wuyin has been a Buddhist nun for over sixty years. She has dedicated her life to improving the status of fully ordained nuns, first in her native Taiwan, and now around the world. At the age of 77, Master Wuyin said she came halfway around the world specifically to teach this course at Sravasti Abbey. She wanted to observe and support the Abbey’s growing bhiksuni sangha and to train and inspire nuns from other places to establish monasteries themselves.

During the initial convocation, Venerable Master Wuyin offered auspicious gifts to the Abbey. Among them were two crystal lotus lamps for Venerable Thubten Chodron. One of Venerable Wuyin’s disciples commented, “It was so meaningful to see the abbess of Luminary Temple light the lamp of the abbess of Sravasti Abbey.”

Why is this important?

Monastic communities are essential for the long life of the Dharma. The Buddha stated that where a community of four or more fully ordained monks or nuns practice the Vinaya, his teachings would live long in the world. Sravasti Abbey was founded on that basis.

Buddhism is still new to the USA and the Dharma teachings are extensive. Western practitioners can learn much from the Asian lineages that have preserved them. In particular, Buddhist monasticism is little known or understood in the West, and the Vinaya teachings have not been widely translated or disseminated.

Venerable Changshen, a bhiksuni from Dharma Drum Mountain in Taiwan who is now at Harvard Divinity School, compared “Living Vinaya in the West” to the beginnings of the bhiksuni sangha in China: “In fourth and fifth century China, nuns wished to establish the bhiksuni sangha but there were no bhiksunis there who could give ordination and teach Vinaya. Bhiksunis from Sri Lanka traveled by boat to give the bhiksuni ordination to more than 300 Chinese nuns at Nanlin Temple, thus establishing the nuns’ order that flourishes to this day. Today, in the 21st century, we have a similar story, yet this time it is not about Chinese nuns but Western nuns.”

Feeling the significance of Venerable Master Wuyin and the LIBS faculty coming to the Abbey, she commented, “Before coming to this course, I knew that I would be participating in an historical event that would play a key part for the future bhiksuni sangha to flourish in the West.”

The Vinaya includes guidance on everything from how to handle monastery resources to methods for resolving disputes. Venerable Master Wuyin covered some of essential monastic precepts by focusing on the origin stories. Every precept the Buddha established came as a result of a specific mistaken action done by a monk or a nun. By studying the events—which range from horrific to humorous—that lie behind each precept, we get an idea about which mental afflictions the Buddha was targeting.

The course especially focused on the skandhakas, which describe many of the guidelines for the operation of the sangha as a social and religious institution. Here she taught the basic sangha ceremonies—ordination, posadha (fortnightly confession and restoration of precepts), varsa (rains retreat), pravarana (invitation for feedback), kathina (robe of merit), and so on. These practices create merit and maintain harmony in the sangha. “The term ‘sangha’ means ‘harmonious assembly’,” she explained. “That means we must know how to cooperate. Many mechanisms must be in place for harmony to occur. It is not a given and we pay attention to create it.”

Venerable Master Wuyin presented a vast, practical vision. She emphasized that monastics in the West have to understand both the proscribed (prohibited) and prescribed activities for the sangha and then adapt them to suit Western culture—while keeping their original essence. She stressed that we must know and follow the laws of the land regarding non-profit organizations, construction, and so on.

Master Wuyin also emphasized the role monastics must play in modern society by being of service to others. The bhiksunis in Taiwan are highly respected by both the laypeople and the monks because of the service they offer to society by teaching the Dharma and their involvement in social welfare activities.

Venerable Karma Lodro Gangtso, a recently-ordained American nun, shared how much she was touched by the Buddha’s care for the nuns and monks under his guidance.

“The stories in the Vinaya about monastics from 2500 years ago are still alive today; those bhiksus and bhiksunis were just like us. The way Master Wuyin taught, it felt like they lived yesterday, not long ago in a distant land. These teachings made the Vinaya so relevant to our lives.”

Her comments, along with talks from several other nuns, are on the Sravasti Abbey YouTube channel.

Master Wuyin emphasized that the Vinaya teachings must be lived to be understood. Through teachings, video, discussion groups, skits, and games, the LIBS bhiksunis brought the Vinaya alive for all of us. An especially skillful teaching tool, the skits were creative and hilarious, bringing out many points to contemplate that would not necessarily be brought up in regular conversation.

Just in the 17-day program we experienced so many of the things we studied. We did posadha together, witnessed a head-shaving ceremony, conducted a novice ordination, lived together as a community, confessed our shortcomings and rejoiced in each other’s virtue. We chanted together—our voices mingling and complementing each other as we chanted age-old verses—some in Asian languages, others in English. We supported one another as we all put joyous effort into practicing the path.

In the Mahaparinibbana Sutta, the Buddha emphasized the importance of the four-fold assembly—male and female lay Buddhist practitioners and male and female Buddhist monastics. All have a responsibility to “walk in the path of the Dharma,” and all are necessary for the teachings to survive and thrive. With over 1.2 million Buddhists in the USA (according to a 2012 Pew Charitable Trust report), the Buddha’s teachings to alleviate suffering and bring happiness are clearly taking root here. Sravasti Abbey is encouraged that support for Buddhist monasticism is also growing. We rejoice in the growing monastic communities in the West, and offer tremendous gratitude to our teachers in the Taiwanese and Tibetan Buddhist communities who have helped us learn and grow.

The Abbey hosted “Living Vinaya in the West” free of charge. We were able to do this due to the generosity of people across the globe. In addition, forty local volunteers supported the program by cooking, driving, cleaning, and running errands. This meritorious event could not have happened without their kindness and enthusiasm. We are very grateful.

Venerable Master Wuyin promised to return to Sravasti Abbey to encourage our monastic efforts to preserve the Vinaya and the Dharma and serve society. As we witness the discord prevalent in American public discourse, we rejoice at learning ways monastics can be more effective in bringing Buddha’s teachings on love, compassion, and wisdom to all who can hear them.

At the end of the last session, Venerable Master Wuyin said that her experience during the course gives her hope for the future of monastic communities in the West. She then read a verse she had composed for Sravasti Abbey:

The establishment of Sravasti Abbey embodies the paragon
of Mahaprajapati Gautami’s spirit.
As long as the harmonious saṅgha upholds the Vinaya [concentration and bodhicitta],
the brilliant lamp of wisdom will be sustained. 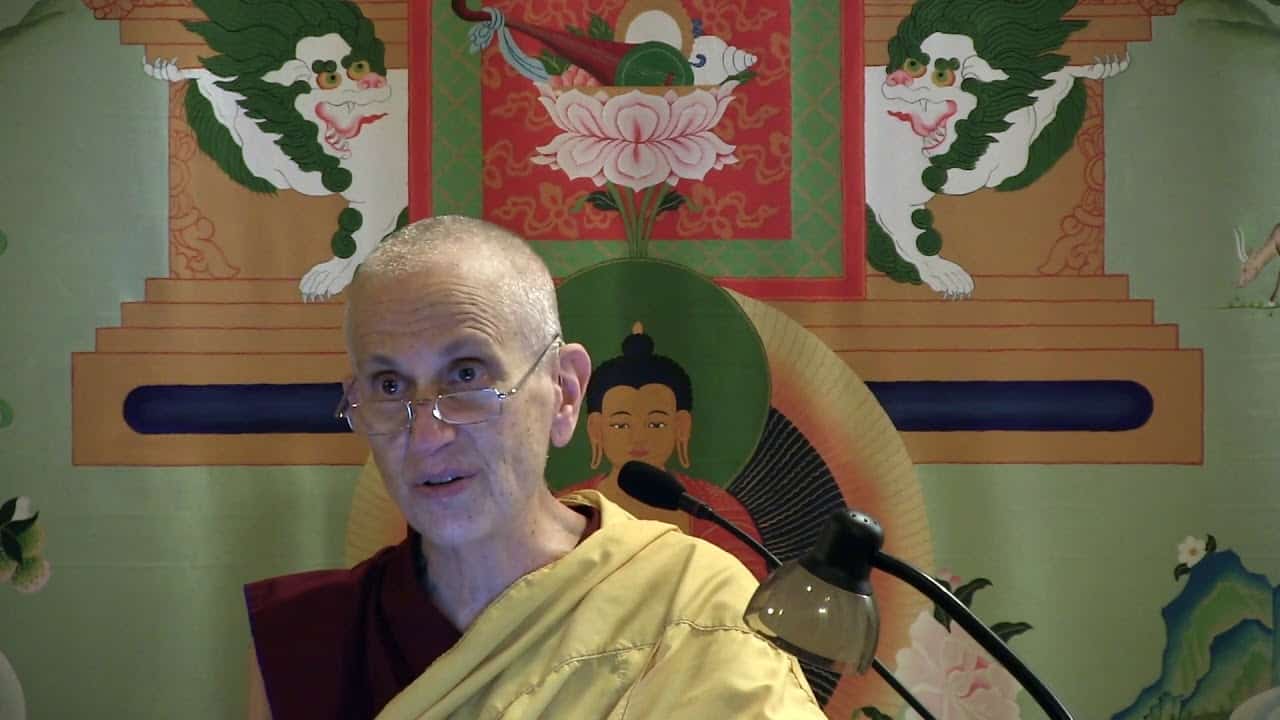 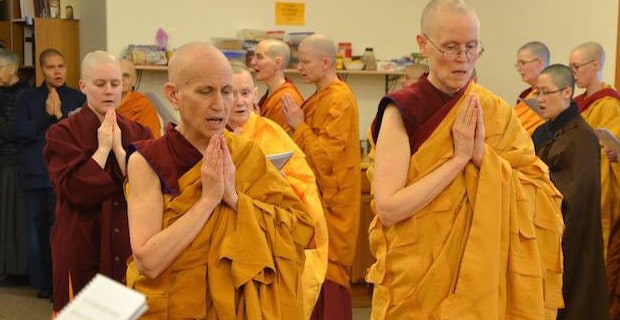 The future is up to us