We’ve been talking about the prayer at the time of death. We did one verse last time, but that verse is really crucial because it sets the stage for everything else, because it’s requesting Amitabha to come at the time of death “and advise me to give up grasping at mundane existence and invite me to come to your pristine realm.”

Then we go on to verse two, and here Lama’s starting with the death absorptions and the visions that occur then.

When the earth absorbs into water,
the mirage-like appearance is perceived,
and my mouth becomes dry and foul-tasting,
please come tell me not to be afraid
and inspire me with true courage.

What’s happening at the time of death is that the physical elements and the winds are losing the ability to act as the physical support of consciousness. It’s said that these elements dissolve, they absorb, basically, they’re weakening in function. In each one of these eight stages that happens there’s a particular sense that is greatly reduced, an element that is reduced, different physical signs that happen, different visions that occur to the mind.

What’s happening is, because the earth element in the body is losing its force, the water element becomes more pronounced. That’s why you have the vision of water. at that particular time. And what’s happening in the body is, you can feel when your earth element dissolves your physical sensations really change. The body begins to feel quite heavy, and he’s saying, “My mouth becomes dry and foul tasting.” Doesn’t sound very nice. But this is what happens at the time of death. And they say that your body just can feel very, very heavy, and outwardly you can’t move as well as you used to before.

When this is happening, this first step in—maybe you can call it—”actively” dying. And these stages of the active dying, they can happen very quickly, within minutes, or in the case of an accident very quickly like [snaps fingers] that. Or they can even happen over a period of days, or maybe even, in come cases, if somebody is very, very ill, over weeks. Something like that.

At that time you’re getting the real sense that this is it, I’m dying. There’s no question about it. It’s at that time that fear can come up. And that fear comes often because there are visions—karmically created visions—of whatever karma happens to be ripening and that will influence what our next life is. And of course that karma that happens to be ripening is going to be influenced by our mental state at the time we’re dying. That’s why it’s really important to have a very peaceful environment when you’re dying, not surrounded by things that are going to make you get attached, things that will make you worry, things that will make you upset or angry. Very peaceful. That’s why I think, I always say I don’t want to die with relatives and friends around that are grasping at me, because then that brings up grasping. And then also you have to take care of them instead of doing your meditation which you need to be focused on.

While for some people, maybe, worldly people, having others there when they’re dying, it might console them, it’s also probably bringing up attachment. But you have to balance it, because if it makes their mind more peaceful to feel that people are there, then so be it. But if we’re practitioners then the more we can prepare our mind before we’re actively dying then the more we can set a different kind of tone and a different mental state when we’re in the process of actively dying.

Another reason for the fear is there’s regret about how you lived. There you are dying and you realize you’re still holding grudges against people, and what use are those grudges when you’re dying? But it’s too late, you can’t make amends now. Or there are people that you need to apologize to. Again, it’s too late, you can’t do that. All sorts of negative deeds that we’ve done, the feeling of regret and remorse comes up, and that can lead to a feeling of fear because you become clear that it’s a negative feeling arising in the mind and that’s going to make some kind of negative karma ripen, which does not bode well for the next rebirth.

That’s why we keep saying that we’ve got to practice while we’re alive, and at the end of each day settle—in our mind, at least—any kind of conflicts that we’ve had with people so we don’t carry them on when we sleep or carry them on to the next day. If we’ve gotten angry, or we’ve gotten greedy, or whatever, before we go to bed use the Dharma antidotes in the lamrim and the thought training to reverse how the mind is thinking if we’re stuck in some kind of affliction then. At least mentally apologize to people we need to apologize to, forgive the people we need to forgive, so that when we go to sleep we’re not carrying all this stuff with us, and when we wake up we don’t have it. Because it becomes very, very clear—perhaps you’ve noticed—when you go to sleep in a bad mood you wake up in a bad mood. Have you noticed that? If you go to sleep and you’ve been angry before you go to sleep, you wake up and you’re angry. If you go to sleep full of greed and dissatisfaction, you wake up like that. This is why it’s important to practice that at the end of each day so we sleep well, and then clearly during our lives, like I said before, don’t wait until the end to do all of this, but when we arrive at the time of death, we’ve kept up, we’ve purified, we’ve let go of things, so then you can focus on the visions and remembering all these kinds of things, instead of being distracted.

Another reason for the fear is just this awareness that we’re leaving everything that’s familiar. We were talking last week a little bit about how we want predictability, we want clarity, we want consistency, and here at the time of death there is no predictability, clarity, or consistency. It’s dependent arising, and karma’s ripening dependent upon what we did before. To realize, “Okay, my whole ego identity, how I think the world should be, who I am in it, how people should treat me, all of that is evaporating. So there can be a lot of fear at that time of, “Who am I going to be? And who am I?” There becomes very strong grasping at the self, and the “I” and “mine” at that time. Especially when it becomes clear that we’re leaving this body which is so much the basis of our identity, because the body is where we usually associate the “I” as existing.

As we studied in the four establishments of mindfulness, the body is the abode of the self, yet we’re separating from the body, and then who are we going to be?

This is why all these things are so important to think about while we’re alive. That’s why getting so distracted by small things during the day is such a waste of our time, because we need to be using our time to think about these more important things, not about, “Well somebody put this here and I want it put there. And somebody did it this way and I want it done this way. Or somebody said this to me, why did they say that?” Because at the time of death who wants to be thinking about that? That’ll definitely make some negative karma arise. And if we don’t want to be thinking about it at death, why stew over it while we’re alive when we need to actually use the time to practice letting go and feeling peaceful about all these things that we are letting go of. And if we can let go during our lives then we create so much less negative karma, so much more virtuous karma, so that at the time of death the field of karmic seeds is more tilted in our favor than if we spend our whole life just upset about “the tables aren’t lined up correctly,” and, “my robes are torn,” and frustrated because of the guy with the heaters, or who knows what. You know how our mind gets stuck on things. So to just practice during our life unsticking the mind.

We’re asking Amitabha, “Please tell me not to be afraid and inspire me with true courage.” But if we haven’t practiced well during our lives even Amitabha saying, “Don’t be afraid,” isn’t going to stop our fear. Again it’s this thing of we have to do our part so if Amitabha comes and says “don’t be afraid,” we’ll believe him. And like I was saying before, it doesn’t necessarily mean you’re going to have a vision of Amitabha, but by reading this and contemplating it, we’re actually reminding ourselves, “Oh, when this starts to happen, don’t be afraid,” and develop true courage.

At the time of death what do want to be thinking about? Refuge, bodhicitta, emptiness. So when we’re saying, “Amitabha, instill in me true courage,” what’s going to give us courage? Refuge, bodhicitta, emptiness. We have problems now. Do we remember those three? If we don’t, then at the time of death are we going to remember them? Even if Amitabha is there in full technicolor, would we even pay attention? This is why the practice happens while we’re alive. That’s the best way to do it. And not say, “Well, at the end I’ll just believe in Amitabha and then that’s all I need to do at the end.” It’s not going to work that way.

I remember one of my friends who lived in lower Dharamsala when I lived in India, and he told me a story about how he was in Dharamsala, but his house was a little bit below, he had to go down a road to get to his house. And he was walking past one of the fruit stands going down, and he slipped on something. And he told me the first thought in his mind when he slipped and fell was, “Oh shit.” And that really scared him because he thought, “If I die and that’s my last thought, then what?”

So those kinds of experiences, when they happen in our lives and we see that, they can be big wake-up calls for us on how important it is to train the mind. 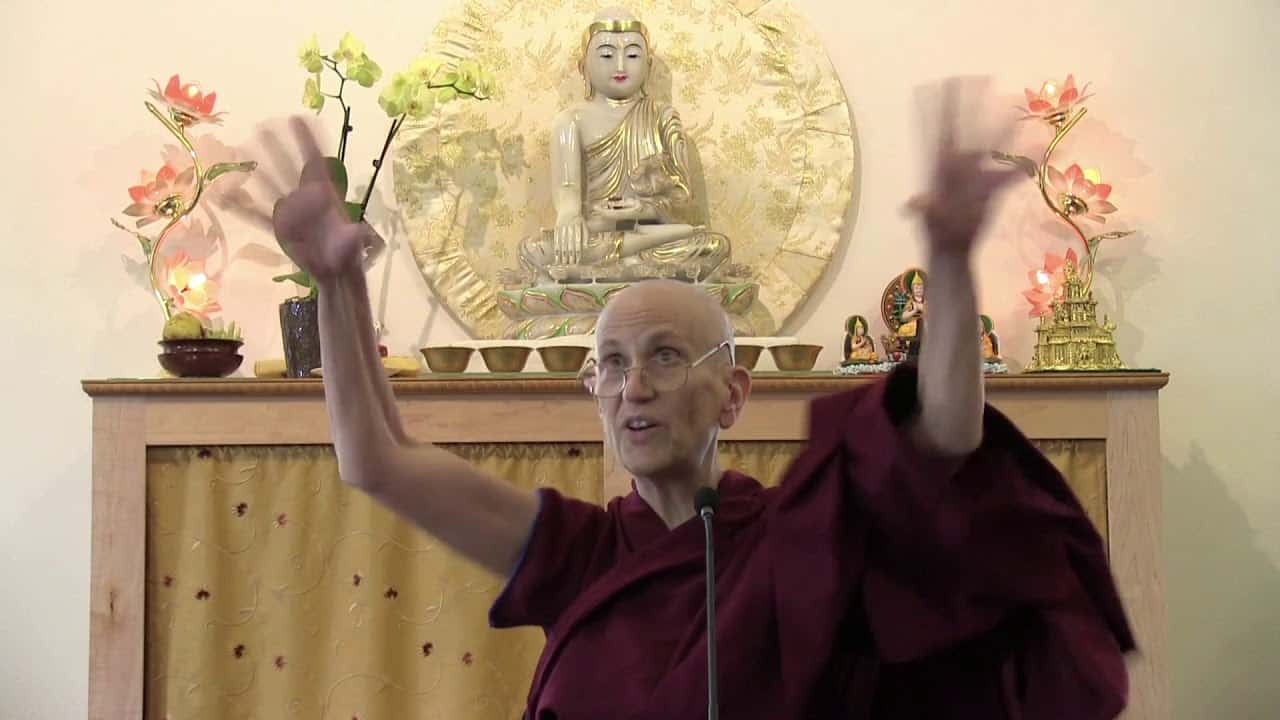 Amitabha practice: Prayer for the time of death

Amitabha practice: Practice while we are alive