The practice of confession

The practice of confession

Part of a series of short talks given in preparation for the Amitabha Winter Retreat at Sravasti Abbey in 2017.

To continue with the seven-limb prayer, the third one is confession. Actually, I’ve discovered that “repentance” is a better translation, because repentance includes confession plus making amends. Just confession isn’t actual purification. We have to make the amends, too. Apparently, when I looked up “repent,” which is not a word I really like, in the dictionary it had the meaning we wanted. If anybody can find a better word than “repent” please tell me.

The idea of this third branch is to purify negativities. That’s really important because our minds are covered over not only by the afflictions but also by the seeds of actions that we’ve done in the past, so the destructive actions can ripen and create impediments in our practice like sickness or inability to meet teachers or difficulty understanding the Dharma, falling asleep during teachings, things like that. They create obstacles in our practice and really prevent us from understanding what the Buddha is saying and making progress on the path. So this whole thing of purification is quite important.

I think psychologically, also, it’s very important because it allows us to make peace with our past. When we look back and we’ve done negative actions, one thing is we may not feel so good about what we’ve done in the past. Having that sense of guilt or heaviness really weighs us down and impedes us from practicing the Dharma and builds a lot of negative self-worth: “Oh, look at the things I did in the past, I was so awful…” And then we demean ourselves. That’s not very effective spiritually or psychologically.

Purification really helps us to admit and acknowledge and make amends for things that we’ve done in the past that we now wish that we hadn’t done and that we don’t want to experience the karmic results of.

Are you getting what I’m saying? For example, if somebody… Like I keep telling you, the stupid thing with my second grade teacher who wouldn’t let me be in the class play. It’s a trivial thing, but it’s a good example. So here’s this situation. That situation is never going to change. I’m never going to be in second grade again. I’m never going to have the opportunity to be in that play. My teacher, Mrs D, she probably isn’t alive now, or if she is she’s not going to remember me. So that whole thing is over. There’s no way to change that situation. What I discovered in my Vajrasattva retreat years ago is I was still angry with her about that. What I can change is my anger towards her. I can’t change what she did. I may not have done anything, what I would consider unethical—I didn’t talk back to her, I didn’t do that stuff—but I’m still harboring malice about what happened in second grade. And harboring malice puts the seeds of negative karma on my mindstream. So I need to purify my response to what she did. Because that’s the only thing about the situation that I can ever change is my response to what somebody else did. I can never change what they did. But if I stay stuck in the response that I initially had—which may have been a very, very afflicted one, anger, resentment, who knows what it was—then my own mind is impeding itself. When I talk about making peace with the past it’s like looking at things that happened to us and practicing the Dharma, finding another way to see the situation. Like, “This is a result of my own negative karma, why am I getting mad at somebody else?” Or, “Look at me, I’m still mad about something that happened in 2nd grade….” Like, “Chodron, it’s time to put this down. Nobody else, amongst 7 billion human beings on this planet cares about your not being in the class play in second grade. Do you really have to make such a big deal about it in your life?” I talk to myself that way. Maybe for you that way of talking to yourself doesn’t work, but for me it works, and it’s like, yes, it’s time to forget about this, and forgive Mrs D., and wish her well, and have other memories of second grade besides this one. Because there were many happy things that happened in second grade, too. Why am I only remembering this one? That way I find when we use the Dharma it really purifies previous negativities and enables us to go forward with a much clearer, a much more peaceful mind.

The purification process itself has four opponent powers.

Although we just say in the short seven-limb prayer, “I confess all my destructive actions created since beginningless time,” actually you could stop at that line and probably meditate for a few eons. Or at least a little bit more time.

We always confess and repent all of our negativities, but it’s also good to think of specific ones that we’ve done that really weigh on our minds, that we really don’t feel good about and focus on those too, because the four opponent powers really helps us just make peace with all of that, put it down.

We usually do purification practice every day because we also usually create destructive karma every day. It’s a good habit to get into. And even though we can’t remember what we’ve done in previous lives, they say we’ve done everything, so it’s always good to confess it. Don’t worry about, “Oh, I confessed something I didn’t do.” Because we don’t know what we’ve done in our previous lives, so we can’t know if we’ve really done that or not. But we certainly can make strong determinations not to do that kind of action again. And that’s very, very helpful to us.

You’ll notice when we’re talking about the conditions for being born in Sukhavati, that purification is one of them. So this third of the seven-limb prayer is specializing in that. 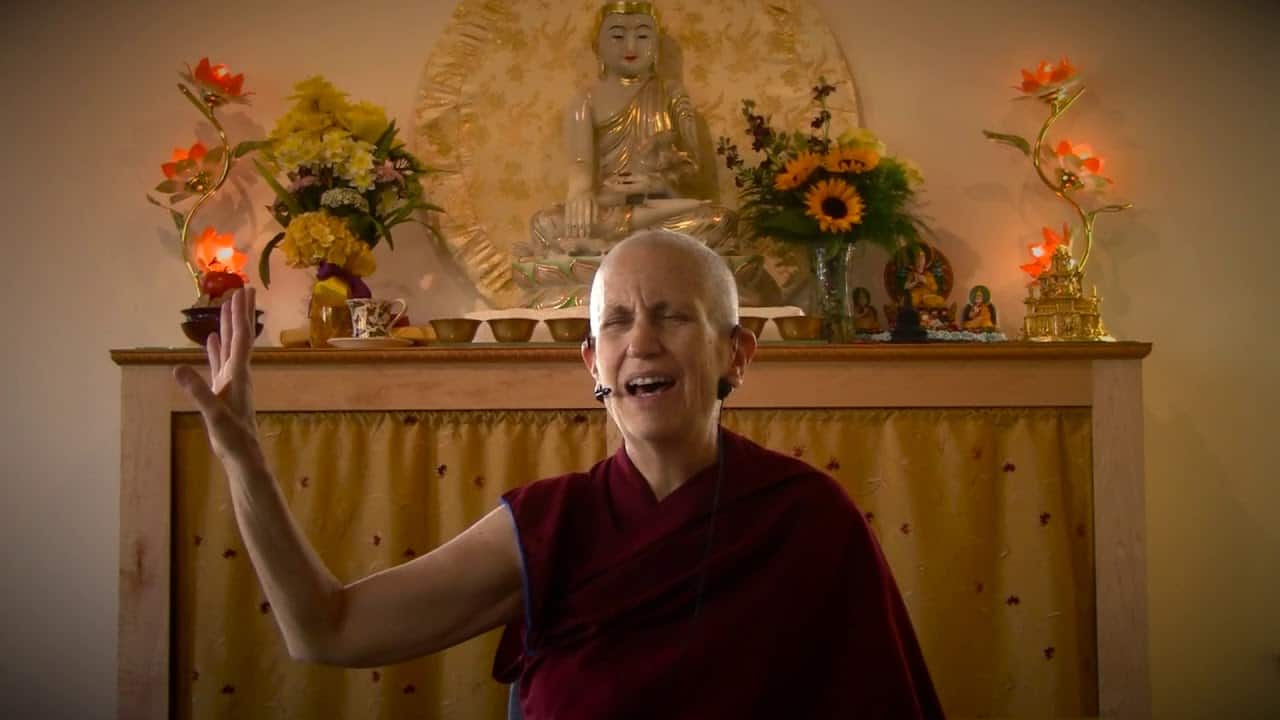 Bowing and making offerings to Amitabha 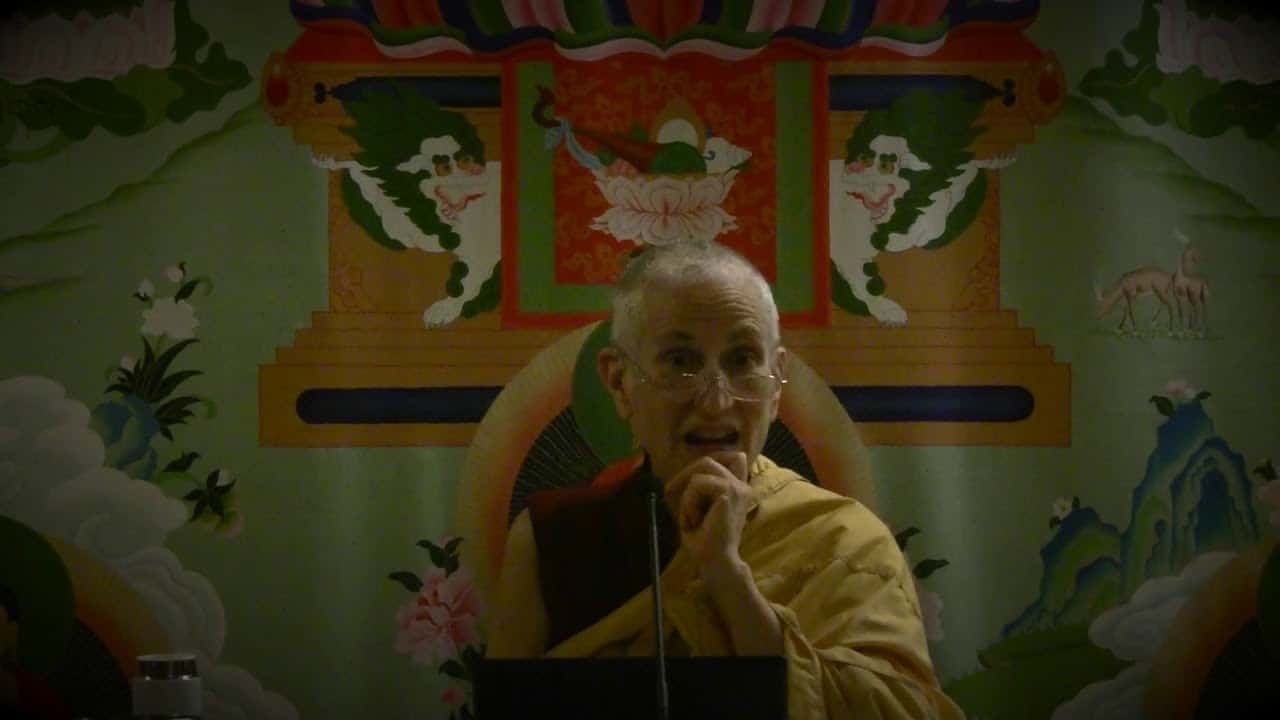