There inevitably comes a point in every retreat I’ve ever been on—in the middle of the retreat …. Because people go into the retreat—you’re so excited, this is new, I love this meditation practice, it’s so wonderful, I’m going to have some really good meditation sessions …. And at the beginning of the retreat everything’s new and different, and you’re really working and studying and things are falling into place and you’re having some “ah hah” moments …. And then the retreat continues …. [laughter] And then you get somewhere in the middle of the retreat and you go, “I still have my old mind, with all my old junk, and I thought that was all going to go away when I did retreat. It was supposed to all go away.” This also happens when people ordain. They enter like “I’m going to put on these robes and [clap] next week my anger’s going to be gone.” And then after a few months it’s like, “Ugh ….” You know? Still there.

You’re in the middle of the retreat and all you have is your own mind. So, your attachment, all the grudges you’ve been holding, all your jealousy and resentment for other people, all your self-pity, tons of anxiety. The mind spinning around with all sorts of plans of what you’re going to do after retreat. And the mind’s just … you’re sitting there with your mind. And you thought you were going to be Manjushri by that time. Or Yamantaka by that time. And be blissful. And it hasn’t happened.

And so then what do we do at that time? We want to distract ourselves. Right? So what do you do in a silent retreat to distract yourself? You talk. You write notes. I think we’re going to have an award at the end of the retreat for the person who wrote the most notes. And the person who wrote the most emails. And the person who just had little small things to say to people who went off here and … talking talking …. Because this is our usual way. I mean, how do we distract ourselves? We go outside of ourselves. So we talk. We eat. We daydream. You go through the bookshelves again and again looking for a sci-fi book. And there isn’t one. And you’re sure you saw one. But there must be a novel somewhere. You hope that you can find a computer that nobody’s looking on, maybe you can go on the Internet and watch a movie. Just like “Get me out of this mind!”

It happens always at the middle of the retreat. And this is actually to be expected. These habits that we have have been there since beginningless time, they’re not going to disappear in two months of retreat, you know. We’re going to chip away at them, for sure. And we are chipping away. And your mind is quieter now than it was before. Which is why you can see the junk better. Okay? But don’t have great, fantastic expectations. Rather, be like a child who’s learning to walk. You just take one step, and another step, and then you fall down. But you took your two steps [pat on the back] so you’re proud of yourself. Then you get up again and you take three steps. And then you’re proud of yourself again. So don’t think you’re going to become an Olympic runner the first time you go from crawling and you stand up. Just rejoice in what you can do and accept yourself. Bring your energy inside. Make sure you get enough exercise. Take walks on a beautiful day like this. But let go of the expectations. And try and have some kind of patience for yourself when your mind is behaving like a two-year-old.

They call it the “terrible twos.” Because when a kid is two years old the notions of “I” and “mine ….” They begin to get it, what “I” and “mine” mean. So two-year-olds are always going, “This is mine! It’s mine. Not yours. It’s mine.” And “I want this. I don’t like that.” “So and so started it, I didn’t.” “Get these things away from ME. Because if you don’t I’m going to have a temper tantrum.” And “I want. I want this, I want this, I want this. Your mommy, daddy, brother, sister, everybody should give me what I want. And if you don’t I’m gonna sit in my room and cry and suck my thumb. And then when I come out I’m gonna have another temper tantrum. And I’m gonna disturb the whole family until you give me what I want.” Right?

That’s kind of how our mind is. It’s still kind of at two years old. And it goes through all these dramas. Do you have some nice dramas going on in your meditation sessions? [laughter] It’s like, “I’m going to get off this seat and I’m going to go tell that person off!” And it’s silence, so then you have to wait until the appropriate time, and then you grab them and go talk to them.

And then we get fed up with ourselves. “Oh, I’m a two-year-old, I’m so bossy, I’m so terrible, I upset the whole family. I’m just the most awful child in the world.” And then we go back to yelling and screaming at everybody. And then beating our breast in regret. And then sucking out thumb. You know? [laughter]

This is why there’s a term in the teachings that they talk about the “childish” sentient beings. Because this is really the way we are sometimes. So rather than become the child when your mind is acting this way, you have to be the adult and deal with the child. You have to deal with your own mind. Instead of letting the child go and disturb the whole family with all its rantings and ravings, you look and you say, “Okay, I know you’re upset about this and that, you want this and that, but you know you can’t get everything you want. And one of the things you have to learn to be a grown-up is how to bear the frustration of not getting what you want. So this is a good time to practice that.” And you kind of talk to your mind. You have a good talk with yourself like you’re talking to a little kid.

Because little kids, they don’t realize that their behavior affects other people. They’re only thinking about themselves. That’s all they can think about. “I want this, I don’t want that.” They don’t think, “How is my screaming and crying and carrying on going to affect everybody else around me?” They don’t think that. They don’t have the capacity to think beyond themselves. And sometimes, as adults, we’re similar. All we can think about is what we want. And so we have to, when our mind gets like that, to notice that and be the adult to our own childish mind.

Another thing that kids don’t realize when they’re acting out and behaving like this is that they’re self-sabotaging. You’ve all been with kids who all they can do is scream and cry and carry on, and it’s like “get me away.” You love them but … don’t want to be with them. So in that way the kid’s self-sabotaging. Because they really want to have good relationships with other people, but their behavior is pushing everybody else away.

And so it is, too, when our self-centered mind takes over and all we can think about is “I” and “mine,” and what the world owes me. Then what we’re doing is we’re pushing other people away from us. When what we really want is to be connected with other people.

So we have to see this dynamic and then explain it to that little child. “You want to be close to people, right? You want to have friends. Don’t throw sand at them. When you throw sand, people don’t like it. And it’s not going to make you happy in the end either. Because they won’t want to be with you.”

And the same way for us, as we want to practice the bodhisattva path, when your childish mind and our self-centered mind comes up, we’re self-sabotaging ourselves. Our innermost, deepest spiritual aspiration—if you look at the prayers we’re reading—is “I want to become everything for everybody and cherish other sentient beings more than myself,” and that’s my deepest, heartfelt wish. And to attain full enlightenment so that I can really work for their benefit. That’s what I really want to do in my life. But when I let my two-year-old mind run the show I’m acting completely opposite to my own heartfelt bodhisattva aspiration. So how am I benefiting by doing that? I’m not. I’m being disloyal, in a way. I mean, it is disloyal to my own bodhisattva motivation. So it’s not just a thing of “I’m harming others,” but I’m self-sabotaging.

Let’s try that out. And let’s remember that we’re trying to keep silence. There are things we need to discuss, there are logistical things that are happening in the retreat, and so some of us have to talk about those things. But all the other stuff. Like “Hey, she gave this talk today. Were you listening? I think she was talking about you.” Or, “She gave this talk today. She was talking about me, not anybody else.” Just kind of chill out, it’s like, I don’t need to talk to anybody so much about all of this. I need to learn to work with my own mind. Of course, if I really get stuck, I ask for help. But right now, I’m really going to try and strengthen my own mental muscles. It’s like when you’re learning to walk you have to build up your muscles. If as soon as you stand up you sit down and cry for mommy and daddy to pick you up and carry you, you’re never going to build your muscles to be able to walk. So in the same way we have to build our mental muscles and learn to help ourselves in this way. 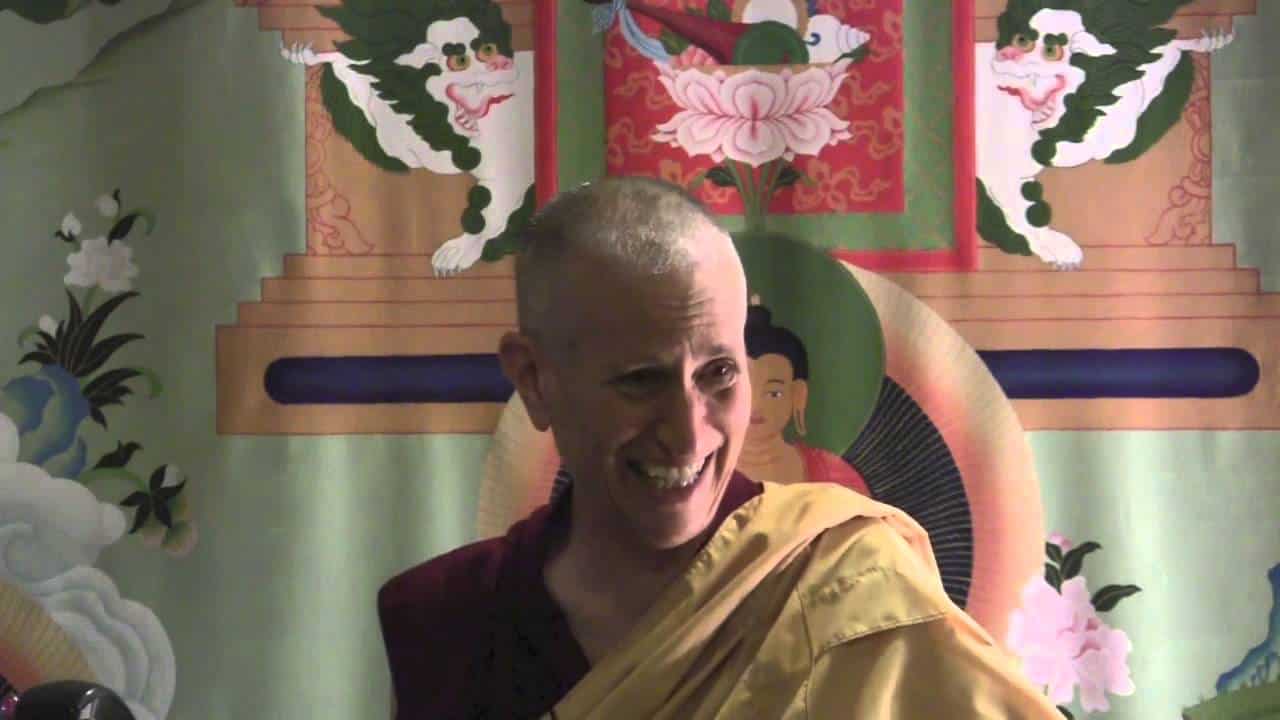