Dakini Power: Twelve Extraordinary Women Shaping the Transmission of Tibetan Buddhism in the West by Michaela Haas is the first and only book to feature the life stories of the most accomplished female Tibetan Buddhist teachers who bring fresh insights into Buddhism in the West. Their absorbing, personal and provocative accounts provide surprising insights into what this age-old tradition of wisdom can offer to modern seekers. Featured are Khandro Rinpoche, Venerable Pema Chodron, Venerable Thubten Chodron, Roshi Joan Halifax, Lama Tsultrim Allione, and others. Below is an excerpt from the interview with Venerable Thubten Chodron. 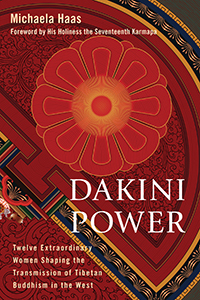 In 1977 Thubten Chodron was among the first generation of Westerners to become a novice nun in the Tibetan tradition; in 1986 she took full ordination. She readily admits that ordained life is “not clear sailing.” Disturbing emotions “do not disappear simply because someone shaves their head.” Yet she feels that the precepts, which include celibacy and refraining from lying, stealing, or harming anybody, reduce distractions and allow her to focus all her energy on waking up, working with her “internal garbage,” as she calls it. But practically speaking, the living conditions as a Western nun proved difficult. In Christianity, monks and nuns usually enter into a particular order and are given room and board in a monastery. With Western Buddhist monastics, there was no such thing.

“When we got ordained, the Tibetans really did not know what to do with us,” she admits. “They were refugees, struggling to reestablish and sustain their own communities in exile.” For about fifteen years her teachers sent her around the planet “like an international ping-pong ball” to work in dharma centers in Asia and Europe. Spending a few years at a fledgling nunnery in France, she notes that the nuns were given the horse stables for their lodging, whereas the monks resided in the comparatively lavish Nalanda Monastery a few kilometers away. The nuns had to pay for food and heating, and because she had no money she did a lot of prostrations during the winter to keep warm. “We fixed up the stables, and it was really a wonderful time,” she concedes, while also pointing out that they were all quite new, with no senior nun to guide them. “We were out on our own and had to survive financially. Keeping your precepts is very difficult when you have to work for a living. When I ordained, I vowed not to work a job. Sometimes I was extremely poor, but someone would always offer help just before things got desperate.” For a while she sewed robes for donations. This experience motivated her to establish Sravasti Abbey—“so that future generations do not have to go through the insecurity we did.”

Michaela Haas, PhD, is an international reporter, lecturer, and consultant. She is the owner of HAAS live!, an international coaching company which combines her experience in media with mindfulness training. With a PhD in Asian Studies, she has taught at UC Santa Barbara and the University of the West as a visiting scholar in Religious Studies. She has been studying and practicing Buddhism for almost twenty years. Since the age of sixteen, she has been working as a writer and interviewer for major nationwide German newspapers, magazines and TV stations including hosting her own successful nationwide talk show. In America, her articles have appeared in the Washington Post, the Huffington Post, and numerous online media. (Bio courtesy of DakiniPower.com. Photo by Gayle Landes)
View all posts by Michaela Haas →