The formula for happiness

The formula for happiness

Part 1: Love people, not pleasure
Part 2: The love of money

We’re continuing with the article “Love People, Not Pleasure” which was an op-ed in the New York Times by Arthur C Brooks. He was talking about how fame didn’t bring you happiness, material possessions–after you’ve reached a certain level where your basic needs are met–don’t continue to bring you happiness, and now we’re going into sense pleasure. So he says:

So fame and money are out. How about pleasures of the flesh? Take the canonical hedonistic pleasure: lust. From Hollywood to college campuses, many assume that sex is always great, and sexual variety is even better.

This assumption actually has a name: the “Coolidge Effect,” named after the 30th president of the United States. The story (probably apocryphal) begins with Silent Cal and Mrs. Coolidge touring a poultry farm. The first lady noticed that there were very few roosters, and asked how so many eggs could be fertilized. The farmer told her that the virile roosters did their jobs over and over again each day. “Perhaps you could point that out to Mr. Coolidge,” she told him. The president, hearing the remark, asked whether the rooster serviced the same hen each time. No, the farmer told him– there were many hens for each rooster. “Perhaps you could point that out to Mrs. Coolidge,” said the president.

The president obviously figured these must be happy roosters. And notwithstanding the moral implications, the same principle should work for us. Right?

Wrong. In 2004, two economists looked into whether more sexual variety led to greater well-being. They looked at data from about 16,000 adult Americans who were asked confidentially how many sex partners they had had in the preceding year, and about their happiness. Across men and women alike, the data show that the optimal number of partners is one.

This might seem totally counterintuitive. After all, we are unambiguously driven to accumulate material goods, to seek fame, to look for pleasure.

Well, we’re driven by attachment, aren’t we? I mean, he’s kind of taking this is a given of life, but we don’t.

How can it be that these very things can give us unhappiness instead of happiness? There are two explanations, one biological and the other philosophical.

From an evolutionary perspective, it makes sense that we are wired to seek fame, wealth and sexual variety. These things make us more likely to pass on our DNA.

You know, I don’t buy into this whole thing that it’s, like, we are wired to pass on our DNA and that that’s what motivates us day and night with everything. I think there’s more to us, even on a biological level than that.

So if you’re famous, wealthy, and have sexual variety then you’re more likely to pass on your DNA? If you’re famous then you’re off gloating over your fame and you’re not home with you spouse. If you’re wealthy you’re working overtime at work, you have no time…

Had your cave-man ancestors not acquired some version of these things (a fine reputation for being a great rock sharpener; multiple animal skins), they might not have found enough mating partners to create your lineage.

But here’s where the evolutionary cables have crossed: We assume that things we are attracted to will relieve our suffering and raise our happiness.

This, yes, this is the function of that mental factor “inappropriate attention.” That we assume thing that we are attracted to will relieve our suffering and increase our happiness.

My brain says, “Get famous.” It also says, “Unhappiness is lousy.” I conflate the two, getting, “Get famous and you’ll be less unhappy.”

I don’t think that’s our brain. Because our brain isn’t conscious. Our brain can’t have ideas. There may be chemical, electrical activity in the brain when we’re having ideas, but the brain itself isn’t the organ that is consciousness.

But that is Mother Nature’s cruel hoax. She doesn’t really care either way whether you are unhappy– she just wants you to want to pass on your genetic material. If you conflate intergenerational survival with well-being, that’s your problem, not nature’s. And matters are hardly helped by nature’s useful idiots in society, who propagate a popular piece of life-ruining advice: “If it feels good, do it.” Unless you share the same existential goals as protozoa, this is often flat-out wrong.

So that part we would agree with. This advice “if it feels good, do it,” and that getting pleasure will always make us happy–yes, we would certainly agree from a Buddhist viewpoint that that’s false. You may get some immediate pleasure from something but down the line it doesn’t bring the lasting pleasure and if often brings more problems.

More philosophically, the problem stems from dissatisfaction– the sense that nothing has full flavor, and we want more. We can’t quite pin down what it is that we seek. Without a great deal of reflection and spiritual hard work, the likely candidates seem to be material things, physical pleasures or favor among friends and strangers.

So that’s true, you know, without a lot of inner contemplation, if we just kind of feel dissatisfied and feel an emptiness inside then we just go along with how we’ve been conditioned and brought up and what society tells us, and we just need more material things, more friends, more sex, and more fame. And so we run around trying to get those, thinking that they’ll bring us happiness, And we’ve all been through that and known the result.

We look for these things to fill an inner emptiness. They may bring a brief satisfaction, but it never lasts, and it is never enough. And so we crave more. This paradox has a word in Sanskrit: upadana,–

Which literally means grasping. It’s the one for grasping or clinging. It’s the ninth of the twelve links. But he has it here…

–which refers to the cycle of craving and grasping. As the Dhammapada (the Buddha’s path of wisdom) puts it: “The craving of one given to heedless living grows like a creeper. Like the monkey seeking fruits in the forest, he leaps from life to life… Whoever is overcome by this wretched and sticky craving, his sorrows grow like grass after the rains.”

This search for fame, the lust for material things and the objectification of others–that is, the cycle of grasping and craving–follows a formula that is elegant, simple and deadly:

Yes? And that’s what people often do, you know, we love things–material things, money, stuff like that–and we use people for sexual pleasure, emotional pleasure, fame, to boost our ego.

This was Abd al-Rahman’s formula as he sleepwalked through life. It is the worldly snake oil peddled by the culture makers from Hollywood to Madison Avenue. But you know in your heart that it is morally disordered and a likely road to misery. You want to be free of the sticky cravings of unhappiness and find a formula for happiness instead. How? Simply invert the deadly formula and render it virtuous:

Okay, so here the “love people” doesn’t mean “be attached” to people. It means really care about them. And “use things” means just be practical.

Easier said than done, I realize. It requires the courage to repudiate pride and the strength to love others–family, friends, colleagues, acquaintances, God [holy beings] and even strangers and enemies. Only deny love to things that actually are objects. The practice that achieves this is charity. Few things are as liberating as giving away to others that which we hold dear.

That’s quite nice, isn’t it? “But it requires courage to repudiate pride.” You know, “Look what I have, this this this, I’m so successful.” Comparing ourselves to others, and we’re better than they are, and so on. “And the strength to love others,” not just to use them. But to actually care about them and connect with them and be of benefit to them. And derive satisfaction from being of benefit, from giving and generosity, whether or not others respond. Or whether they respond as we want them to respond. Or not matter how they respond. To just take delight in the giving part of it.

This also requires a condemnation of materialism. This is manifestly not an argument for any specific economic system. Anyone who has spent time in a socialist country must concede that materialism and selfishness are as bad under collectivism, or worse, as when markets are free. [True.] No political ideology is immune to materialism.

Finally, it requires a deep skepticism of our own basic desires.

Of course you are driven to seek admiration, splendor and physical license. But giving in to these impulses will bring unhappiness. You have a responsibility to yourself to stay in the battle. The day you declare a truce is the day you become unhappier. Declaring war on these destructive impulses is not about asceticism or Puritanism. It is about being a prudent person who seeks to avoid unnecessary suffering.

Abd al-Rahman never got his happiness sums right. He never knew the right formula. Fortunately, we do.

It’s interesting reading something like that in the New York Times, isn’t it?

So when we love things, there it becomes obvious that love means attachment. If love means wanting the other person to have happiness and its causes, you don’t want that for ice cream. You only want that for people. The trick is to want them to have happiness and its causes no matter how they treat us. That’s hard. But that’s how we’re training our minds. And I think that’s the role of using reasoning in training our minds, because we say, “All sentient beings want happiness and want to avoid suffering.” Simply because they’re living beings. And therefore, they’re just like us. So if we wish happiness for ourselves it makes sense to wish happiness for them. They’re just like us.

Also, if we wish happiness for them it’s more likely that they’re going to treat us better. And then we’ll be happier. Whereas when we get angry at others and we wish suffering for them, then if they’re suffering they will be out of sorts and whatever they do will affect us adversely. So even if we’re just thinking selfishly about our own happiness, it makes sense to take care of others.

Part 1: Love people, not pleasure
Part 2: The love of money 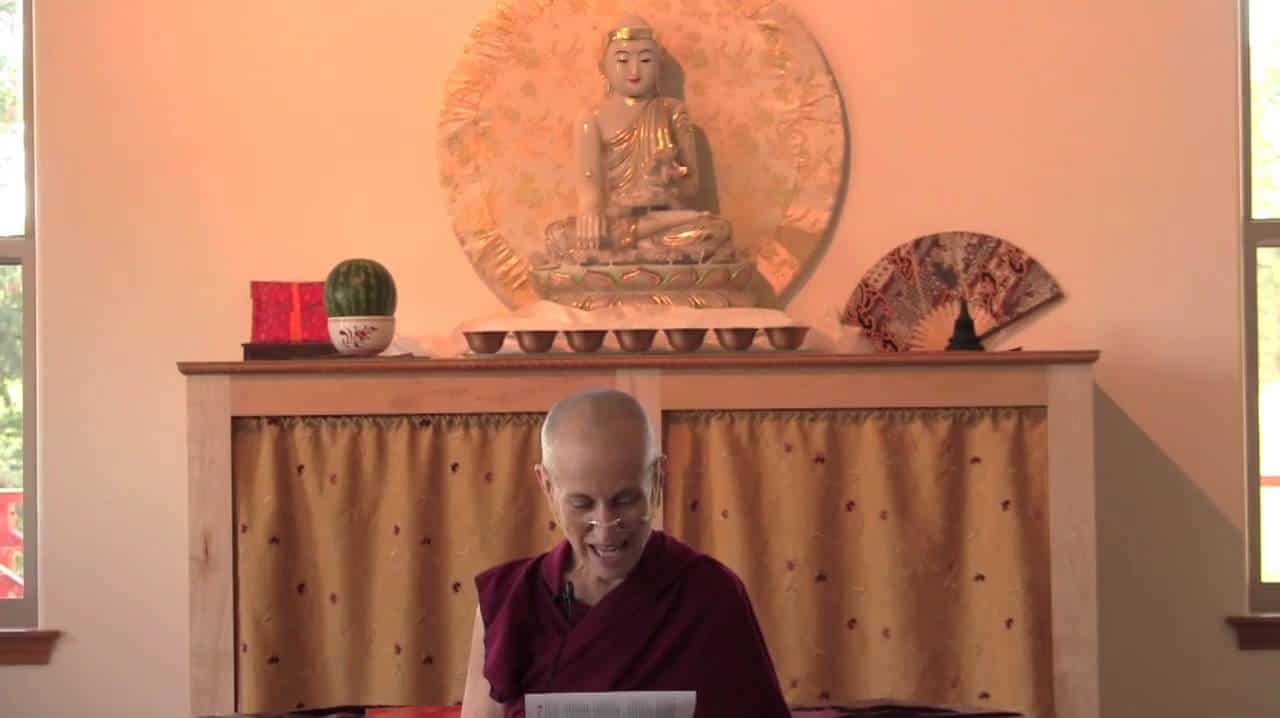 It comes from our mind 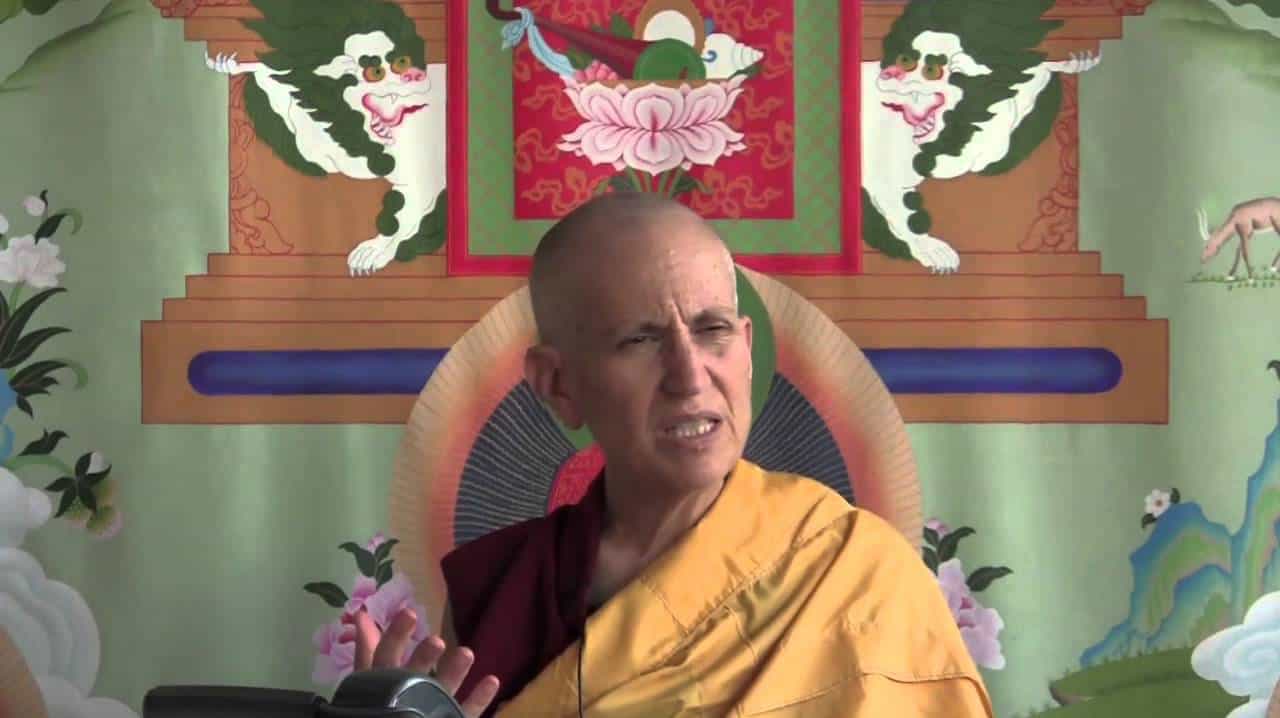