A Bodhisattva Breakfast Corner commentary on the subject of rebirth.

We’ve started the SAFE, Sravasti Abbey Friends Education, program and the people doing module 1 have some questions about rebirth, so I’m going to try and answer them.

Somebody, referring to me, is saying, “She’s the first of my teachers to say that a belief in rebirth isn’t necessary for Buddhist practice. I find that somewhat surprising, and I don’t understand how it’s possible to be a Buddhist and attain enlightenment without it.” I usually don’t say that a belief in rebirth is not necessary for attaining enlightenment or for developing the deeper realizations because definitely it’s necessary. It’s part of the Buddhist world view. How can you cultivate bodhicitta, wanting all sentient beings to be free of samsara, if you don’t have the notion of samsara and the notion of cyclic existence, which depends on rebirth?

Then for calling oneself a Buddhist–I was talking to somebody recently about that, and he said he’s fine with the idea of emptiness and everything else he hears. He’s just not sure about rebirth, and I said, “As long as you keep the door open and explore the idea of rebirth and think about it and think about the logical reasons behind it, you don’t have to have a firm belief.” If you say, “Absolutely I don’t believe in rebirth,” then calling yourself a Buddhist might be a little strange. But if you have doubt about it and are not sure, that’s ok. I mean not everybody is convinced of everything at the same time.

But then also, the criteria we use to call ourselves a Buddhist–who knows? The strict definition is you’ve taken refuge in Buddha, Dharma, Sangha, but the loose definition is people use the term however they feel like it and however makes sense to them. Some people are more strictly in line with Buddhism, but they don’t call themselves Buddhists, and other people’s beliefs aren’t very strictly in line with Buddhism, and they call themselves Buddhists. You know, it’s a label. And there’s no Buddhist catechism that says you have to believe points 1 through 15 in order to use that term. I think it depends very much on how somebody feels.

Then another question. “What is reborn in the process of rebirth?” is a question I don’t quite know the answer to. The mindstream, along with the karmic imprints, goes from one life to the next, but just what is that, and what does that mean? I really have to fight not to believe that there’s some sort of soul, something real that goes from life to life. I mean we each have our own mindstream. There’s no collective mindstream, so doesn’t there have to be something that’s really me? The idea of it just being something formless that’s always changing doesn’t really make sense to me because even then, I still want there to be something about it that’s me.

This is exactly what the Buddha is refuting when he taught no self or selflessness. This is exactly it because we have this innate feeling that there’s something that’s really me. You can take my body away, you can take my mind away, you can take everything away, but there’s a real me there that’s unchangeable, that goes from life to life, that is indestructible and is the essence of me-ness. Sometimes we feel that. Sometimes we create a philosophy about that. It’s somehow comforting to think that there’s something that’s really me.

But also, if there were something that is really me, we should be able to identify exactly what that thing is. Then we begin the search. What is that thing that is really me? Is it my body? Well, the body dies. Is it my mind? Well, my mind’s changing all the time. Well, maybe it’s one part of my mind that doesn’t change. But the mind, by definition, is something that is clear and knowing. To know an object and reflect an object, it has to change. If you’re saying that there’s something that is really, unchangeably, immutably, me, then it couldn’t be the mind because the mind also changes. Then you’re positing some kind of soul or some kind of Self, with a big S. Well, what exactly is that? It can’t have any of the functions of the body because that’s what the body does. It can’t have any of the functions of the mind, such as feeling, cognizing, perceiving. Exactly what is this soul? Find it and identify exactly what it is. Look for it and let me know what you come up with. Because we want there to be something that’s really me. Look for it. Figure out what it really is. Search for it. 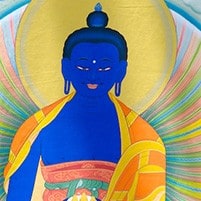 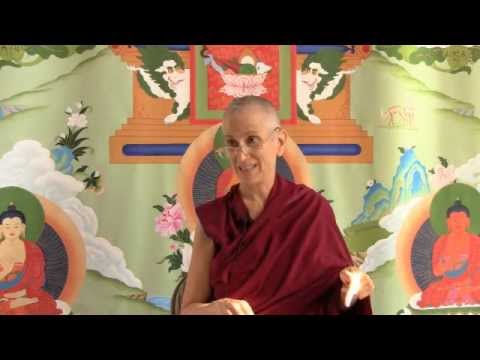