Integrating Dharma and skillful means in our everyday relationships

Report on the 17th annual gathering of Western Buddhist monastics, held at City of The Dharma Realm in West Sacramento, California, October 12-21, 2011.

Each year I look forward to our annual Buddhist Monastic Gathering, a time when Buddhist monastics from various traditions gather together to get to know each other and to discuss topics of mutual interest. The gathering, hosted by the City of The Dharma Realm in West Sacramento, California, October 12-21, 2011, was our 17th such conference. The large majority of monastics were Westerners—from the US, Canada, Australia, Germany, UK, Switzerland, Uruguay, and Norway—with some Asian monastics from Taiwan and Sri Lanka. We practice Theravada, Pure Land, Zen, and Tibetan Buddhism. Many of us were senior monastics, many were juniors.

The monastic gathering followed directly on the heels of the Bhikkhuni ordination held at Spirit Rock Meditation Center where three Western women received their full monastic ordination in the Theravada tradition. This unique ordination was attended by hundreds of people who rejoiced at Theravada women’s new found ability to receive the full bhiksuni ordination. The preceptor was an America bhikkhuni, Ven. Tathaaloka, and both the bhikkhu and bhikkhuni sanghas that witnessed the ordination consisted of not only Theravada monastics, but also those of us who follow Tibetan and Chinese Buddhism. This spirit of inclusion, the respect shown to female monastics, the support for bhikkhunis shown by the bhikkhu sangha, and the faith and support displayed by the laity all contributed to an atmosphere in which we rejoiced at our own and others’ virtue and opportunities.

The theme for this year’s monastic gathering was “Building Community: Integrating Dharma and Skillful Means in Our Everyday Relationships.” Bhikkhu Khemaratana gave the opening talk, “The Buddha’s Gift of Community,” in which he outlined the Buddha’s comments on the importance of living with spiritual friends, practicing under the guidance of a wise and compassionate teacher, and creating a harmonious sangha community which supports the spiritual progress of the individuals in it. This was followed by a talk by the psychologist John Welwood, who spoke on “Spiritual Bypassing and Healthy Community.” He emphasized the importance of acknowledging our various emotions and not avoiding them in the name of being a spiritual practitioner.

The next day opened with Ajahn Brahmali from Bodhinyana Buddhist Monastery in Australia discussing “Using the Dhamma-Vinaya to Create a Warm and Friendly Community” in which metta (loving-kindness) and compassion are foremost. In speaking of the seven ways for resolving disputes, he described how his community understands the precepts by relying on the Patimokkha itself, rather than on the later commentaries. In so doing, they find it easier to apply the precepts to modern circumstances. In the afternoon session, Bhiksuni Drimay facilitated a panel on “How to Be Without Community” in which four monastics—Bhiksuni Tenzin Kacho, Sudhamma Bhikkhuni, Sramanerika Samten Palmo, and Sramanerika Nyima Dolma—spoke about how they nourished their Dharma practice while living on their own.

Bhiksuni Thubten Tarpa from Sravasti Abbey gave the first presentation on the following day, discussing “Learning from Experience: Building Harmony in Community” in which she talked about the various means Sravasti Abbey uses to cultivate harmony, including Non-Violent Communication. In the afternoon, Rev. Master Meian Elbert and Rev. Master Daishin Yalon spoke on “Dealing with Difficulties in Community Life.” They spoke about how the community at Shasta Abbey healed after the departure of their abbot.

The last morning we shared reflections on our gathering and began to plan the one for next year. The nuns of City of Dharma Realm who were our hosts cared for us so well, preparing comfortable rooms and delicious food. We joined them for mid-day chanting, and some of us joined their evening chanting as well. We are very appreciative to them for their kind and joyful hospitality.

The schedule allowed plenty of time for informal discussion and sharing, which is a big part of the gathering. This is another time when we learn from each other about a wide range of topics—how ordination is given and how precepts are followed in the various traditions, how to support each other in the Dharma, how to relate to our seniors and juniors in the monastic life and to lay followers, plans for expanding our monasteries and practical issues involved in that, such as green building, and so on. Over the years many of us have become trusted friends so that when we need to discuss delicate situations or need advice, we can turn to each other. Having attended 15 of these 17 monastic gatherings, I can say that the Buddha is surely very happy with the harmony and support existing amongst his Western monastic disciples. 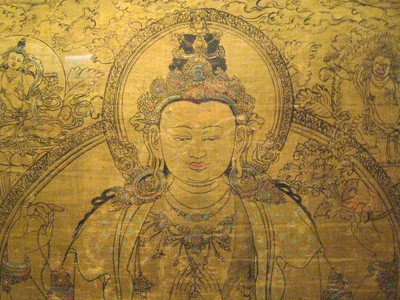 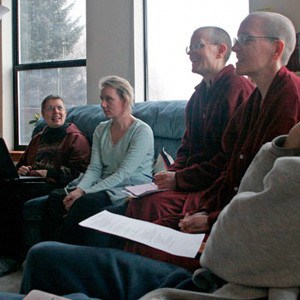 Supporting monastics in the West