Report on the 16th annual gathering of Western Buddhist monastics, held at Vajrapani Institute in Boulder Creek, California, in 2010.

For centuries, Buddhists from the various Buddhist traditions seldom met each other due to geographic distance, different languages, and different cultures. Now they can, and for 16 years Western Buddhist monastics from the diversity of traditions have gathered together to learn about each other’s practices, education, and communities. The result has been the development of beautiful friendships and mutual respect as we support each other in living the simplicity of monastic life in a society preoccupied by the complexities of consumerism. This year 36 of us from the Theravada, Ch’an and Zen, and Tibetan Buddhist traditions gathered at Vajrapani Institute, a Tibetan Buddhist center in California, for four days to share “Reflections on Renunciation: The Practice of Vinaya in the 21st Century.” 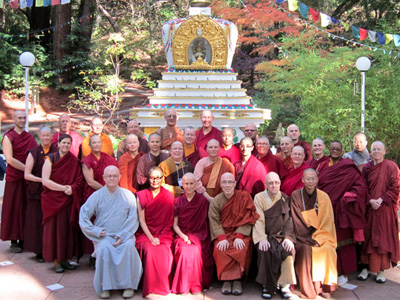 Vinaya is the monastic discipline we pledge to follow when we take ordination. The code of monastic discipline was created by the Buddha and has been practiced and passed down to the present for over 25 centuries. Some Vinaya trainings such as to abandon killing, stealing, and so forth are universal ethical principles. Others apply to community life, monastics’ relationship with the broader society, and how monastics receive the four requisites of life—food, shelter, clothing, and medicine. Because the Vinaya came about in ancient India, in a society that was very different from our modern Western one, the question arises, “How do we live precepts set up in one environment while living in a different one? What must not be changed, and what can be adapted?” Regarding this, two councils were held each day:

In addition to the councils, we meditated together and did chanting from our various traditions. In the evenings, we gathered to hear “Stories of the Great Masters”—i.e. of our teachers who worked so hard to teach and train us and to bring the Dharma to the West. These stories were inspiring and left many of us with tears of joy. Ven. Heng Sure led us in singing Dharma songs written to folk music melodies, and he and Bhikkhu Bodhi had us laughing with their stuffed animal puppets discussing the Dharma.

Our Annual Monastic Gatherings will continue in 2012. It is a cause for great rejoicing for everyone that the monastic sangha from so many Buddhist traditions comes together in harmony and mutual support.