Brief biography of vinaya master Venerable Bhikshuni Wu Yin whose commentary on the Bhikshuni pratimoksha is presented in Choosing Simplicity. 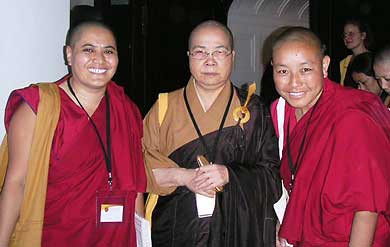 Born in Taiwan in 1940, Venerable Wu Yin received the shramanerika, or novice, vows in 1958 from Venerable Ming Tzung and bhikshuni vows in 1960 with Venerable Pao Shen as her preceptor. She graduated from the Chinese Cultural University with a degree in Chinese Literature and from the five-year Buddhist studies program at the Chinese Buddhist Threefold Training Seminary. Then she resided at the Hsin Lung Temple, headed by the distinguished Bhikshuni Tien Yee.

After World War II, people in Taiwan were struggling to survive. They were trying to recover from the Japanese occupation, deal with the huge influx of refugees from mainland China, and rebuild their political and economic infrastructure. At that time most Buddhist temples in Taiwan engaged in agriculture or depended on ritual services for the deceased in order to support themselves. Very few could afford to offer in-depth teachings on the Buddhadharma, nor did the monastics have time to engage in social work. Most laypeople were unable to distinguish Buddhism from folk religion. Saddened by the condition of Buddhist education and practice and inspired by the examples of past monastics who upheld the Buddha’s teachings, Bhikshuni Wu Yin made a vow: she would establish Buddhist institutes and temples to train nuns so that they would have the necessary knowledge and skills to transmit the Dharma to the greater society. Her goal became to help Buddhist nuns in Taiwan, China, and the West so that they could establish sangha communities and use their talents and wisdom to help humanity.

In 1980 she became the abbess of Hsiang Kuang Temple (Luminary Temple) in Chia-I Country, Taiwan, and began the Buddhist Institute of Hsiang Kuang Temple. Most of the institutes’ students—nuns or those preparing for ordination—came from universities and colleges. By 1994, over eighty nuns had graduated, each being capable of teaching the Dharma and of offering spiritual leadership and guidance. To engage monastics in social education, she founded a Buddhist Studies School for laypeople in 1984. This was the first time in Taiwan that structured and organized materials were designed and used to teach Buddhadharma to the public. At present, under Venerable Bhikshuni Wu Yin’s guidance, three such schools have been founded in southern Taiwan. They offer a three-year program of study to the public, and each year over eight hundred people graduate from this program.

In 1985 Bhikshuni Wu Yin initiated the magazine Glorious Buddhism, and in 1992 she established Hsiang Kuang Publishers. At present her ordained disciples translate and edit Buddhist texts and are preparing a Vinaya dictionary. In 1989, the Luminary International Buddhist Society was founded to encompass these various projects, with Bhikshuni Wu Yin as its abbess and leader.

During the opening ceremony for Life as a Western Buddhist Nun, Venerable Bhikshuni Wu Yin made the following statement at the stupa marking the site of the Buddha’s enlightenment at Bodhgaya,

Over twenty-five hundred years ago, the Buddha’s stepmother, Mahaprajapati, and five hundred women from the Shakya clan went through incredible difficulties to request bhikshuni ordination from the Buddha. In giving them permission to enter the order, the Buddha affirmed women’s ability to practice the Dharma, to liberate themselves from cyclic existence, and to become enlightened. For over twenty-five centuries, women have practiced the Dharma and achieved the beneficial results. Now we are reaping the benefit of their practice and of the Dharma that they preserved and passed down. It is our privilege and responsibility to learn and practice the Dharma not only to attain spiritual realizations, but also to benefit others by preserving and passing on these precious teachings to future generations.

Practicing the Buddha’s teachings and observing the Vinaya

During Life as a Western Buddhist Nun, Venerable Bhikshuni Wu Yin told the participants on the lunar new year,

Early this morning I went to the Enlightenment Stupa and prayed for peace to fill our world and for Dharma to be sustained. I prayed that the Buddha’s wisdom and light go with each bhikshu and bhikshuni, shramanera, shramanerika, and layperson, so that you will bring the Buddhadharma to each corner of the world you visit, sharing it in skillful ways according to the dispositions of the people and culture of the place. Each of you preserves the Dharma within yourself, and by practicing the Buddha’s teachings and observing the Vinaya, you will tame your body, speech, and mind. For that reason, take care of yourselves, not out of selfishness, but in order to cultivate your wisdom, accumulate positive potential, and benefit all beings. 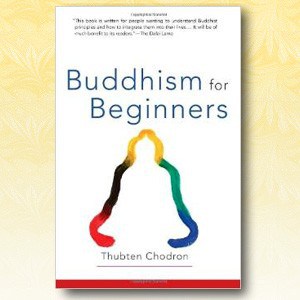 Faith based on reason

Karma: cause and effect