From enemy to brother

From enemy to brother

Kevin sent us this touching story, which is a perfect example of how artificial the categories of friend, enemy, and stranger are. When we look beyond superficial appearances and human-made boundaries, into people’s hearts, we see that we are all the same in wanting happiness and not wanting suffering.

In 1968 and 1969 I was in Vietnam attached to the 5th Special Forces Division as a member of the 199th Light Infantry Brigade. We pulled operations in the South rice paddies and in the jungles. Our job was to search and destroy the “enemy.” I was very good at what I did.

One particular day, as we were walking silently down a path in heavy jungle, a North Vietnamese Army soldier suddenly appeared in front of us waving a white flag. As we approached him, we could see he was an officer in the NVA Army and obviously he wanted to give himself up. We called such soldiers “Chu Hoi” and they often would come over to our side and aid us in finding the enemy and weapons stashes. We learned also much about the enemy movements through Chu Hois. I remember thinking at the time how young he was to be a Colonel in the NVA Army. We were told, especially me since I was a squad leader, not to talk to him or have any communication with him. After all, he was the “enemy.”

One day, perhaps a week later, we were at a basecamp and I was sitting on a bunker just keeping an eye out. I looked out in the middle of the camp and there, sitting on a log, all by himself, was this NVA Officer. I watched him just sitting with his hands together in prayer and his eyes closed. After a while, he dropped his hands and hung his head down. I remember all this because at the time, I felt this overwhelming sadness for him. It is hard to explain but the longer I watched him the sorrier for him I got until, literally, I had tears in my eyes.

I then broke the rule; I walked over to him and nodded a greeting. I was answered with the most perfect English you can imagine which really surprised me. He invited me to sit next to him, which I did, and we began to talk. I learned that he was a college professor from Hanoi, had been educated in England, and he was missing his lovely wife and children back in Hanoi. He showed me a book of poetry that he had written and in which he had drawn beautiful pictures of dragons and lotus flowers. He read me some of his poetry, and it was truly wonderful. He got out pictures of his wife and children and I did the same with my family. I spent perhaps a half hour with him and before I knew it, we were no longer enemies, but were friends instead. Brothers actually. He was a great guy and we both shared the same reality that neither one of us wanted to be where we were. He needed to be home with his family teaching at the university, and I needed to be out of that war.

But the wonderful lesson for me was that if we just sit down and open our hearts to each other, then we are no longer strangers. We are brothers. I do not know what happened to him later. He was picked up by helicopter and taken away. I missed him a lot. I imagine that when the North Vietnamese invaded the south he was not looked upon too kindly. I prayed that he made it home okay. But at least, for that one brief moment, we shared a wonderful time together and because of that, we were able to put the war out of our minds and to discover compassion. It is easy to love when we clear out minds and hearts and allow love to enter.

Venerable Thubten Chodron: When I asked Kevin if his story could be put on the web, he responded, “Of course. Perhaps it will help somehow, in some way. That would be wonderful. I just know, in my heart and from my own experience, that if everyone would just stay calm, sit down and get to know each other, we could dispel the anger and distrust in the world. We would learn, as I did, that we are so very connected and a part of each other. Perhaps it will happen someday.” 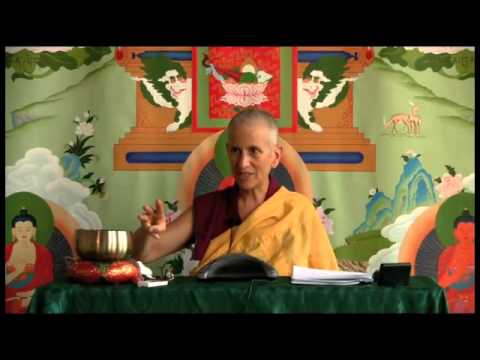