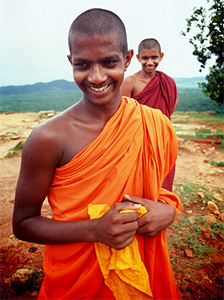 Various Buddhist traditions can learn so much from each other and, by cooperating together, can benefit others. (Photo by Jason Jones)

Few Tibetans have ever really talked to Buddhists from other traditions, due to travel and language constraints that existed in the past. Now, these obstacles in meeting and communicating can be overcome. Various Buddhist traditions can learn so much from each other and, by cooperating together, can benefit others.

In the autumn of 1990, Venerable Dhammaratana, a Sri Lankan monk who began the Buddhist Library in Singapore, and four Singaporeans visited. I arranged for them to meet with both Geshe Wangdak, the abbot of Namgyal Monastery, and Geshe Sonam Rinchen, a teacher at the Library of Tibetan Works and Archives.

Venerable Dhammaratana is incredibly open minded. He requests teachers from all Buddhist traditions talk at the Buddhist Library. When he met Geshe Wangdak, he asked if the Tibetan Tripitaka had been translated into English, because it’s the most complete collection of all Buddha’s teachings. How’s that for shattering preconceptions about Theravadas not accepting Mahayana teaching? He also related that archaeologists have found statues of Chenrezig and Tara as well as Prajnaparamita Sutras in Sri Lanka.

Venerable Dhammaratana said that the Chinese bhikshuni ordination came from Sri Lanka. It subsequently died out in Sri Lanka and now there’s some talk of bringing it back from China. Conservative factions say that’s not the same lineage. However, he finds this silly and thinks eventually those people will have to concede.

The Buddhist Library conducts talks and prayer sessions. In addition, there is a Buddhist choir for teenagers, a Sunday school for children and a counseling service. A Buddhist Welfare Society will open soon, begun by the Buddhist Graduate Fellowship. Such things are unheard of in Tibetan society. Historically they have no tradition of social services because in pre-1959 Tibet, families were close-knit and people in a village helped each other. Geshe Sonam Rinchen was happy to hear about these activities. He said that the lamas used to do a lot of counseling. People would come to them with their problems and conflicts, and the lamas would usually smooth things over. If they couldn’t they prayed to the Triple Gem, “Please give the right answer, otherwise I’d be misleading these people,” and threw the dice! Geshe-la made an interesting comment: sometimes the lamas were so good in smoothing over difficulties that the Tibetan or Chinese government would give them a title and a position. The lamas thought this was nice, but in fact the government was manipulating and controlling them.

Tibetans would ask the lamas, “Which day should I plant my crop? Who should plant the first seed: a man, woman or child? What direction is auspicious to plant first?” To this, Venerable Dhammaratana commented, “They’re just like the Chinese! In Singapore when they ask us to bless their house, they also ask, ‘Is my furniture arranged auspiciously?'”

All in all, Venerable Dhammaratana and the Singaporeans had a great time in Dharamsala. When I saw Buddhists from Tibet, Singapore, Sri Lanka, USA and UK speaking together, it gave me a sense of the universality of the Dharma, and how vast the message of the Buddha spread in our world.

Practicing for a loved one who is ill
Truth