You are here: Home > Practical Buddhism > Prison Dharma > By Incarcerated People > On Compassion > The deer
By B. F. on Jun 18, 2011 in On Compassion

When I was a young man, I used to hunt a lot. I used to just go out and kill things. I was pretty sick and twisted that way. Nothing was safe: rabbits, quail, deer, bobcats, whatever moved. I’d even shoot some dogs and cats and sparrows and hummingbirds, stuff that is not the norm. I did it just to feel that feeling. 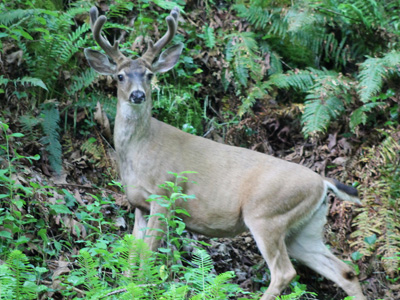 Something in his eyes and his look changed me forever. (Photo by Jon. D. Anderson)

But when I was in my late teens, I started feeling the wrongness of that. The last time I hunted and killed an animal was over 24 years ago. A deer hunt with a few friends changed my life. I shot a four-point buck from about 200 yards with a 30.06 rifle, but it wasn’t a clean shot. We had to track him about two miles over hills and through bush and trees. When I finally caught up to him, he was in a little clearing, sitting on his haunches. When he saw me, he tried to get up and run off, but he couldn’t. He was spent. I got within a few feet of him and he looked at me. Something in his eyes and his look changed me forever.

As I stood there looking at him, my friend came up and told me that I needed to finish him off. But I couldn’t do it. So he did. I gave the buck to my buddies and went back. I’ve never hunted again and never will. The only animal that I’ve killed since then was a pit bull that came up into my yard and was killing my dog. I kicked him and hit him with a 2×4, but he wouldn’t unlock off my dog. So I shot him once with a .357 magnum revolver. I saved my dog, but had to kill the other to do it. That was 19 or 20 years ago.

Venerable Thubten Chodron: I asked B. what “that feeling” he referred to in the first paragraph was.

B. F.: “That feeling” is the feeling of the adolescent boy/young man which is that strange combination of fascination with death, testosterone-driven need to prove your machismo, and the adrenaline rush of “winning.” Hunting used to address all that when I was a kid. What’s more macho to a young boy than emulating the role models in his life, at least the male role models? Teenage boys want to be men SO BAD! And who were the men in our lives? Our alcoholic fathers and uncles and friends’ dads and older cousins. What did they do? Hunt, fish, drive hotrods, drive motorcycles, drink booze, and use dope. I grew up thinking that hunting (and all the other stuff) was expected of me because I was a man in the making. I wanted to be tough and macho. I wanted to be able to drink all night and chase women, etc. and when it came to hunting, that was one of the perfect ways to prove my masculinity. “Yeah! I killed him, first shot! Right ‘tween the eyes!” or “I had to track him all day before I could get a shot at him. But oh boy, did that one shot count!” I remember one time as a 16-year-old hunting quail, I got “a triple,” which is three birds “on the wing” from one covey-jump. A triple is hard to get, so it was a very macho thing. When I used to shoot “trap,” getting “50 out of 50” is a macho thing. Even though we were only killing clay pigeons, it’s still got that “thing” that satisfies the male hormonal drive and gives you that adrenaline rush.

I think part of “that feeling” that I used to love when I hunted and killed things had to do in some twisted way with power. In one finger I had the power to kill or let live. I decided. There’s almost a perverted “I’m God” mentality that’s going on. But when you are a very inexperienced youngster, driven more by hormones and adrenaline than by any semblance of intelligence, your capacity to recognize certain things, such as propriety, relevance, or the “big picture” is so limited. Wisdom is not the forte of most 16-year-olds, and that’s the age I was when I moved away from home and got my own place. It was a small cabin in the foothills, located on an 833-acre ranch in Riverside County. There was so much to hunt that I used to hunt every day.

But in the four years that I lived on the ranch, I attained a little wisdom. When I quit hunting for good, I was 22, but I had actually pretty much quit a couple of years before that, although I never consciously said to myself, “You should quit hunting.” It’s just that now, looking back to 25 years ago, I see that I lost my stomach for killing. I remember buying a new “goose-gun” (a special shotgun) and getting my first goose. I remember very clearly, 27 years ago, being a little bit sad because this big gray Canadian goose that had beautifully flown a couple thousand miles, would never fly again. When I was 15, I used to see a flight of geese and wish I had the right gun to shoot them. When I was 25, I used to see a flight of geese and remember the ones I shot. When I was 35, I would look at the flights and wonder how I could have wanted to kill such beautiful creatures. And now at 45, I admire their beauty. I speak to them and wish them well when they fly over, and I say a prayer for them. If I were to see someone shooting them, I would try to stop it. I suppose the years change us. The evolution of a man.