Working with the angry mind

Working with the angry mind

The Eight Dangers 04: The fire of anger continued (download)

We’re still on the fire of anger.

Driven by the wind of inappropriate attention,
Billowing forth swirling smoke-clouds of misconduct,
It has the power to burn down great forests of goodness:
The fire of anger—please protect us from this danger!

As I said last time, with inappropriate attention we look at impermanent things as permanent, things that are dukkha (suffering) in nature as blissful, things that are foul as pure, things that have no self as having a self. Also with inappropriate attention we make up lots of stories that aren’t true—that we’re completely sure are actually true. So our mind is quite deluded sometimes. And the result of this is—especially when we project negative qualities on someone or something—is then we get irritated, annoyed, angry, hateful, spiteful, revengeful, rebellious, outraged, enraged, wrathful, ferocious…. We have lots of words in English, don’t we, for this kind of mental state.

And then what that mental state leads to is “billowing forth swirling smoke clouds of misconduct.” Because, motivated by the anger then—in terms of the ten negative actions—we do many of them. And then what we’re stuck with is the karmic imprints of the actions that we’ve done and that goes on with us into our future lives and it also obscures our minds.

One of the big things that makes us angry is not getting what we want. Yes? And I think this is part of the value of living in community, because when you live in community you’re not going to get what you want. Because we live together with everybody and so we have to compromise, we have to coordinate. And so we can’t get everything that we want. And then the tendency is to get annoyed and get angry and get upset and blame other people and so on, which is what we did when we weren’t living in community, what everybody does anyway. [laughter]

We use all of these techniques to try and change the situation so that the other person does what we want, or gives us what we want, and we might get that in the end, but together with that we get a ton of negative karma because we have been getting angry about it. So it’s really not worth it.

And then, what do they say? The expression: “You win the battle but you lose the war.” So you get what you want—the people go along with you—but then they don’t like you, they resent you, they don’t want to work with you…. So we’ve kind of lost the war, haven’t we? Because who wants to live in an environment where we don’t get along with the other people, because of our own behavior. So anger is really something to look out for and to try and catch and subdue.

And I’m not saying that we’re bad because we get angry. So don’t start getting mad at yourself for getting mad, or judging yourself because you get mad… That’s not the issue. The issue is anger comes because we’re samsaric beings, but do we want it to continue to come? Do we want to feed it and nourish it? Is it serving our spiritual purposes? Is it benefiting ourselves? Is it benefiting others? Okay? And to really check out those points and then we come back to the thing of: It doesn’t benefit so I really have to do what I can to subdue it. And I subdue it because I care about myself and I care about others. Not because I feel guilty, not because I hate myself, not because I “shouldn’t.” But because I really care about myself and I don’t want myself to experience the bad results of my anger, or for anybody else to.

Then, as for the actual techniques to overcome the anger, read His Holiness’s book Healing Anger. Or my book, Working with Anger. I think Thich Nhat Hanh has a book about anger [Anger: Wisdom for Cooling the Flames]. So really read these books and practice the techniques in your meditation time, before you’re in front of somebody who says something you don’t like. And so take out situations from the past that you haven’t really resolved and practice these different techniques for re-framing the situation and looking at it in a different way. Okay?

If we bring this together with non-violent communication. The NVC way is to re-frame it in terms of: “What are my needs?” And then to see how we can meet those needs without specifying “they have to get met in exactly this way by this person in this situation.” Okay?

So, lots to practice here. 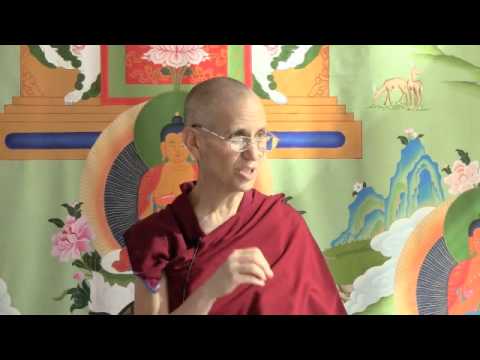 The fire of anger 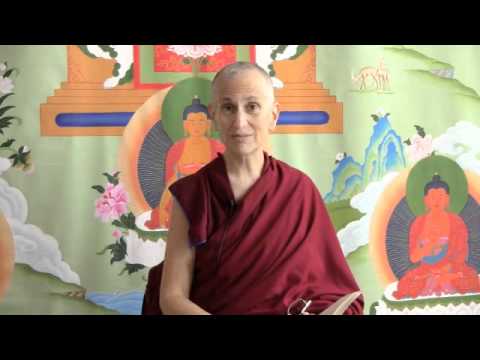 The elephant of ignorance