J. H. wrote that he was in “the hole”—administrative segregation—in which a person is confined alone in a cell for at least 23 hours a day. Venerable Thubten Chodron asked him how he got there and this is his response. 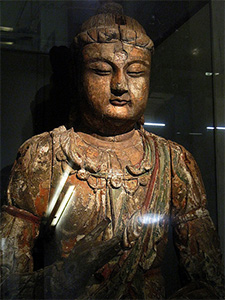 Taking bodhisattva vows is a great support for our practice. (Photo by Snapshooter46)

You asked about the situation that put me in the hole (side note: I’m out of the hole now). The situation was this. An individual attempted to extort me. Who was it? Just someone who lived in the same housing unit. What did he want? He wanted me to give him $100. Why? Well, on the surface it would appear that he was just being your average criminal. He was without money for his common vices and decided that he would simply take money from another person to fix the problem.

On a deeper level, the guy has just begun to realize that there is a real possibility that he may spend the rest of his life in prison. It’s not positive yet, as he technically has a parolable sentence; but he’s not likely to get a “good behavior” parole date. As this sets in, he becomes depressed. Like many of us in prison, he deals with depression by engaging in destructive behaviors and by visiting his suffering upon others.

Just so happens I’m an easy target. You see, everyone knows I’m a Buddhist, and in knowing this, they expect me to be nonviolent. In this particular situation, there was no call for “standing up.” The compassionate thing seemed to be to give the guy room. So I requested protective custody, which is how I ended up in the hole.

I admit there was fear involved—the guy threatened to stab me—but I just couldn’t see letting that fear push me to anger and violence. There was an internal battle though, as this was the first time since I became a Buddhist that my change had been tested. In the past, I was inclined to respond to fear with violence. I am so glad Venerable Robina was kind enough to give me the bodhisattva vows. The fact that I had to stop to consider the implications of my vows saved me from stupidity. That break allowed me to stop and see the other’s suffering, which in turn made violence silly and impossible.

That’s about the long and short of it, friend. Just life in prison, and one more wonderful lesson.

The advantages of cherishing others
Letting go of attachments