Thank you for your coverage of Geshes in the April-May 2007 issue of Mandala. Having well-educated monastics who have practiced well is essential for the continued existence and spread of the Dharma. 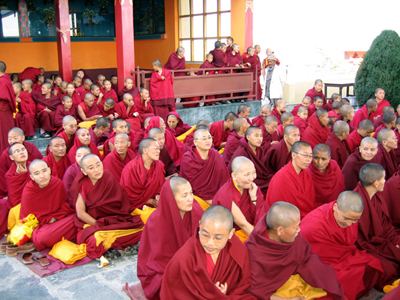 Despite His Holiness’ wish and repeated encouragement that there be Geshe-mas, nuns are still not permitted to take the exams or receive the Geshe degree. (Photo by Courtney Powell)

In the article The Rise of the Geshe-ma, the author said, “Under His Holiness’ direction, the prerequisite to be a gelong (fully-ordained monk) before becoming a Geshe has been abolished… a nun can now follow the full study program offered in the great Gelugpa tradition, take the exam, and become a Geshe or master of divinity.”

Unfortunately, this information is not correct. Despite His Holiness’ wish and repeated encouragement that there be Geshe-mas, nuns are still not permitted to take the exams or receive the Geshe degree. At present, one may receive a Geshe degree in the Gelug tradition only through one of the three great monasteries—Ganden, Sera, and Drepung. Nuns may not join these monasteries.

Furthermore, to become a Geshe, one must complete the Vinaya class, and to do that class and study the Vinaya in depth, one must be fully-ordained bhikshunis. Since the nuns are novices (sramanerikas), they are not allowed to study the Vinaya in depth and thus are not allowed to become Geshe-mas. Here we see that the issue of Geshes and that of introducing full ordination into the Tibetan tradition are closely linked.

On June 26-28, 2006, the ninth meeting of the heads of the four Tibetan Buddhist traditions and Bon, abbots, high lamas, and representatives was held at Norbulinga Institute, near Dharamsala. The topic of the Geshe-ma degree was discussed: some monks favored it, others opposed it. Some monks may not have been aware of the study and debate programs in the nunneries. Some Tibetan nuns spoke up about His Holiness’ wish for Geshemas and their wish to become Geshe-mas. Because no decision could be reached, the issue was tabled until the tenth meeting in two or three years’ time.

I heard that Kopan Monastery is exploring the possibility of the nuns from Khachoe Ghakyil Nunnery having access to a lower-level Geshe degree. The Institute of Buddhist Dialectics now offers a Rimé Geshe degree to its students among whom are a handful of non-Tibetan nuns. I applaud these good starts and hope that one day Tibetan and non-Tibetan nuns will have increased opportunity for ordination, study, and acknowledgement of their abilities.

Your readers may like to know about and to attend the Congress on Buddhist Women’s Role in the Sangha in Hamburg, Germany, July 18-20, 2007, which will focus on the establishment of the bhikshuni sangha in countries where it is not currently present. His Holiness the Dalai Lama will be present the last day and will make a keynote address. As noted above, the opportunity for Tibetan nuns to receive full ordination as bhikshunis is crucial not only for the spiritual practice of those women but also for society in general to benefit from the presence of bhikshunis and Geshe-mas.

Sitting with difficulty
Walking meditation and its benefits