At some point in our lives, all of us have asked ourselves, how we got where we are. Sometimes life just seems so confusing or goes by so quickly that we don’t remember or maybe just don’t want to. I am writing this from a cell at the Airway Heights Correctional Center. I know how I got here. But there is another, more important story filled with hope, moments of grace and awakening that I would like to share with you.

I am still considered young, being only 26 years old. I’ve led a troubled life of abuse, violence, drugs, and criminal behavior. My lifestyle left my body in ruin, to the point that I could hardly function without medication. Just before Christmas, I was charged with violating my probation for being in possession of marijuana which was actually prescribed to me to counter the effects of other drugs I had to take. When I learned that my hearing would not be until after Christmas, I was devastated. This was the first time in six years of marriage that my family would not be together. Christmas was ruined, and this time I had not broken the law. I was so distraught at being falsely accused, fearing that I would lose my family, and worried about disappointing my daughter that I exploded in anger and was repeatedly tazered in my mouth and around my head by police officers. I was sent to Airway Heights Correction Center and placed in segregation for observation. Here I was, sitting in the “Hole” with swollen lips, tazer burns all over my face, my body so sore I could hardly move, and a black eye. Left with my mind whirling with thoughts about my life, my pregnant wife, our family, and our son who died a year earlier, I was on a mental elevator that had only one direction, down. 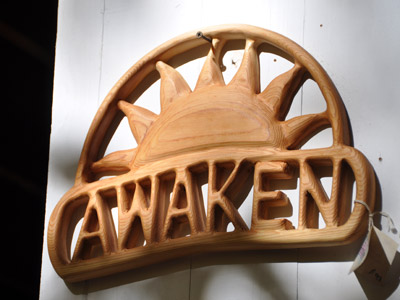 Instead of living in my negative emotions, I could now focus on peaceful changes and touch the compassion and love that has always been within. (Photo by Kevin Harber)

Prison officials had me on suicide watch and handled me carefully. Against the advice of security personnel, the prison psychologist recommended that it would be good for me to be placed in one of the living units with the rest of the population. By the time I was moved into K-unit, I had lost 15 pounds off of an already emaciated body. I was a walking skeleton, stressed out, depressed, and friendless. I remember thinking that I now knew what hell was.

In need of compassion

I don’t remember exactly how it happened but one of the first people I talked to on the unit was a guy everyone called, “C.” He seemed nice enough, polite, not too pushy and did not come across as one of those hard, tough guys. At that time I was stuck in my own suffering so much I did not recognize much of what was going on around me. I was brewing up a nice batch of hate, anger, rage, confusion, and self-pity. Christmas was fast approaching and each passing moment was torture.

When I was here before, I was nearly 30 pounds heavier, I had a shaved head and sported a long braided goatee. I looked like one of the “fellas” or part of the group of the “solid” white racists found in every prison. The way I looked then was nothing close to the way I look now. For C., it just did not matter. He treated me with kindness and seemed to see through my fronts and understood that I was lost and needed some compassion.

It soon became apparent that there were a couple of other men there who were just as kind and understanding as C. was. In fact all three of them hung out together. The one with the same first name as mine was J., a tall, smiling guy a few years younger than me. The other man they called “Padma” even though his ID tag on his shirt identified him under another name. I still do not know what made me gravitate toward these three men. Maybe it was their spirit or positive attitude. Whatever it was, I am glad I picked them out of the crowd. It didn’t take long to discover that all three were Buddhists.

I have been exposed to several Christian churches, I’ve studied Catholicism, Islam, and the Latter-Day Saints, but never any Eastern religions. I listened to what these men had to say and was intrigued and thought I could learn something. If nothing else, maybe I could learn to turn my mind off of me because me was eating me alive!

When I attended my first Buddhist practice, it felt right. What I needed was there in front of me all the time. A path out of suffering. How simple! How complete! How wonderful! I was overwhelmed with emotion and was often on the verge of tears. After the practice I knew I found what I had been searching for all my life. Actually, the thing I had been searching for found me! I left that practice feeling like I never had felt before.

Christmas approached and despite being away from family, I was doing better. My three Buddhist friends embraced me into their circle. I had nothing and they shared everything they had with me. They gave me Christmas cards and gifts. One wrote poems for me to read to my wife over the phone. Most important, they offered companionship, understanding. and true compassion. Much to my amazement, I had a very nice holiday time.

A notice went out. A Tibetan monk was coming to visit! Khensur Jampa Tegchok Rinpoche, Venerable Steve Carlier (his translator), Venerable Thubten Chodron, Venerable Thubten Tarpa, and several others from Sravasti Abbey were scheduled to arrive the day after Christmas.

Physically, I was a wreck, though my friends kept feeding me as much as possible. On the morning Khensur Rinpoche was to arrive, I woke up feeling terrible. I barely made it to breakfast and then went back to bed. Jacob woke me up when it was time to go to the Religious Activity Center. I told him that I was not going. But something kept tugging at me to get up anyway. So I crawled out of bed, hurting all over, and together we went out into the gray snowy cold. No one was there to open the building so we stood out in the cold, waiting. More and more guys began to show up. Still no Buddhist monk or nuns. Just as I was trying to figure out how to kick myself for not staying in bed, they came. Through the falling snow, we could see the maroon robes approaching, faces all smiles. I had never seen a Buddhist monk before let alone a whole herd of monks and nuns. They flowed by, bowing and smiling, like they were entering Disneyland instead of a prison.

When everybody settled down, Rinpoche began to speak. Translation did not distract from his talk. At first he made jest of our condition saying that we looked well fed and well taken care of. Slowly and very clearly he made us see how good we had it in prison. As he continued to speak, it felt as though he was talking just to me. Once again I was overwhelmed by emotion. I was stuck! I could not take my eyes off of him. He said that some of the Tibetan prisoners were starved to a point where they could feel their spines by pressing their stomachs. Here I was nearly a skeleton myself and I understood! I felt C. looking at me and turned my head. He was staring at my stomach with his eyebrows raised in a comical fashion. I couldn’t help it and burst out laughing. In that moment I understood their suffering, my suffering, and the suffering of all sentient beings. For that one moment it was all clear to me.

After the talk, we all walked quietly back to our unit, each of us absorbed in our own thoughts. I now realized that there was a reason I had to come back to prison. It did not matter if it was my fault or not. The important thing was that it took this experience to open my eyes to the fact that there is a path out of suffering and I am on it. Instead of living in my negative emotions, I could now focus on peaceful changes and touch the compassion and love that has always been within.

Many thanks to those who support prison sanghas

I am getting out in a few days!! I have spoken with our teachers, who come in from Padma Ling Center in Spokane. I asked if I could visit them and take refuge. My limited exposure to Buddhism has been a rich encounter. Having a sangha here may have saved my life. I thank C., J., and Padma for all that they did for me and my family. But C. says that we all need to thank all those who support prison sanghas and help make it possible for us to practice compassionate action in difficult circumstances. So, thank you all whoever you are. Just know that you made it possible for me to change. Buddhism did not just change my life, it has given me life. I do not know entirely, how I got here, but I do know I am glad I did.

With A Very Deep Bow.

The greatness of the teaching
Purpose of thought training