One of the inmates who participated in the 2006 Retreat from Afar with Sravasti Abbey reflects on his experience doing the Vajrasattva practice. 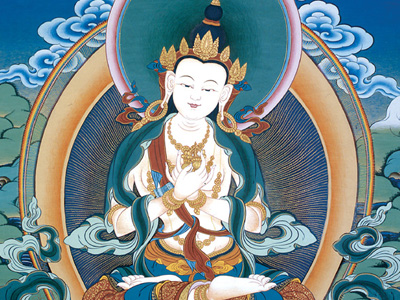 Vajrasattva helps us turn suffering into purification and virtue.

Something interesting happened about half way through the retreat. Because my cellie, Mike, and I have been in the cell together for quite a while now—three or four years—familiarity can indeed breed contempt on occasion. We’ve never fought, verbally or otherwise, though at times we will go through extended periods of not talking to each other and coexist in a chilly atmosphere. Neither one of us has great communication skills, and I have always been passive-aggressive and introverted. We were going through one of these spells during the retreat (as if I couldn’t have expected some negative things to pop up during a purification retreat!), and I decided to make my anger the focus of purification one night. Almost immediately after the session, we found ourselves talking again—a conversation that he started. The reason I make the distinction of who started the conversation is because I believe this was a reflection of the practice working on my external as well as my internal environments. I had a very strong reaction to this incident; for me it was an example of why the Buddha’s teaching of actualizing the practice, finding out for oneself, really speaks to me. My anger became the focus of many sessions after that.

One other remarkable thing concerns my hearing that almost all the retreatants at the Abbey had come down with the flu at the beginning of the retreat. This sounds so silly and egotistical for me to say, but I thought to myself, “Wow, what a dramatic manifestation of purification going on in the retreat!” Sometimes negative karma may ripen as illness instead of as horrible suffering in future lives and I, too, wanted something as dramatic to happen to me to show how good my practice was. That was until I did get sick—twice.

The first time wasn’t physically bad, but it should have been just so I wouldn’t have felt proud. The second time was the flu, and it was a doozy. It sat me down pretty good for about eight days. I had never had body aches like that before. They were waking me up in the middle of the night and I couldn’t fall back asleep. The aching was intense. The lesson came one night when I remembered a saying a Dharma friend and I have: “Better than a hell realm.” Indeed, as acute as those pains were, I would take them over a hell realm anytime. But more importantly for me was sitting there in the dark with these intense pains and starting to do the taking and giving practice (tonglen). I found myself thinking, “If this is what it means to take on the suffering of others, I can do this and more.”

I am pretty good about thinking about the bad things I do or have done, but I don’t rejoice as often as I should, at least not when it comes to my own virtues. It is thoughts like taking on the suffering of others that will generate bodhicitta and act as a cause for Buddhahood, so it was nice for me to realize this and rejoice at my virtue in trying to do this.