Reverend McAllister sent in a news article about a special program set up by death row inmates.

RALEIGH, N.C.—Zach Osborne doesn’t have a lifetime of memories about his little sister. He was only 6 years old, and she was only 4, when she was raped and murdered.

Their mother’s boyfriend was sentenced to death for the crime, and Osborne believes the memory of the murder will make him a better police officer. It’s a goal the rising sophomore at East Carolina University is striving to reach with help from an unlikely source—death row inmates from around the country.

On Tuesday, Osborne, 19, will receive a $5,000 college scholarship from the group of inmates, who solicited money through their bimonthly publication, “Compassion.” Including Osborne’s grant, they have given out seven scholarships worth about $27,000. 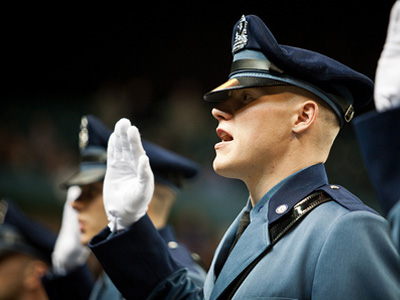 “We would like to support him in realizing his dream of becoming an officer of the law and finding a way to prevent future violence.” (Photo by Deval Patrick)

“We would like to support him in realizing his dream of becoming an officer of the law and finding a way to prevent future violence,” wrote Dennis Skillicorn,1 a death row inmate in Missouri who is the newsletter’s editor, in the May issue. “Our intent is genuine.”

Osborne’s sister, Natalie, was murdered in Asheboro in April 1992. The killer, Jeff Kandies, is on North Carolina’s death row for the crime.

Living through that experience, Osborne said, will “motivate me more to solve cases or to put more effort in them. It will motivate me to try to prevent events like what happened to my family from happening to others.”

Death row prisoners contribute artwork, essays and poetry to “Compassion,” a project of the Roman Catholic Church’s peace and justice committee. It carries no accounts on individual cases or complaints about prison life, focusing instead on what it calls the “positive contributions of death row inmates.”

The newsletter is sold by subscription, with the money used to pay the cost of publishing and fund the scholarships. To win his, Osborne wrote an essay about the crime and the effect it had on him and his family.

Among the others who have received a scholarship is Brandon Biggs, whose father was hit by a car in Fort Worth, Texas, in 2001. Stuck in the windshield, he was left to die despite his pleas for help.

“People want to know why we do what we do,” Skillicorn said. “You just need to read one of the essays and then you’ll know.”