The wheel of life

Part of a series of teachings based on the The Gradual Path to Enlightenment (Lamrim) given at Dharma Friendship Foundation in Seattle, Washington, from 1991-1994.

Overview of the Wheel of Life

We’re going to move into the 12 links, because the 12 links is a teaching that goes into much more detail about how the death and rebirth process happens. I’ve prepared the drawing that describes the Wheel of Life and a brief outline of the 12 links for you to use as a basis when we’re talking. 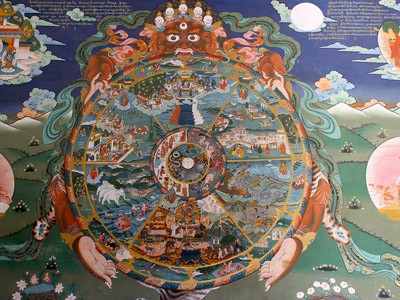 Yama’s four limbs and fangs hold a wheel, which represents samsara, the five aggregates of body and mind, this thing of taking one rebirth after the next. (Photo by Nagarjun Kandukuru).

This big demon-like figure that we see here is the Lord of Death, Yama. Yama’s four limbs and fangs hold a wheel, which represents samsara, the five aggregates of body and mind, this thing of taking one rebirth after the next. The four limbs are birth, sickness, old age and death. So it shows we’re really caught in this cyclic existence. The outermost rim is a pictorial representation of the 12 links, and I’ll get into explaining all of those next time.

The next rim in, you’ll see it’s divided into six sections. Those are the six realms. And then the ring inside of that, you have some beings going down and some beings coming up. This shows that some beings are going to lower realms and some beings are being reborn in upper realms. In the very center, you have a pig, and in its mouth, it’s holding a chicken and a snake. The pig represents ignorance, and what’s coming from it is attachment and anger—attachment being the bird or the chicken, and anger being the snake.

So in a pictorial way, what we’re seeing here is that, encircled by the Lord of Death and the four tragedies of birth, old age, sickness and death, we go through this system of the 12 links, taking one rebirth after another in the six realms, sometimes going up, sometimes going down, depending upon ignorance, anger and attachment.

In the upper left corner is the pure land, and I believe the figure is Amitabha Buddha. This is showing that it’s possible to be reborn in a pure land, whereby we’re out of cyclic existence and we have all the good conditions around us to be able to practice. In the upper right-hand corner, you have a picture of the Buddha pointing: he’s pointing the way to practice, pointing the way out of cyclic existence.

Audience: The Lord of Death looks very malevolent. Is he symbolic?

Venerable Thubten Chodron (VTC): Yes. I think that’s symbolizing that death isn’t our favorite thing. It’s interesting—the Tibetans talk about a lot of these things in a very literal way as well as in a very symbolic way. I personally prefer the more symbolic interpretation, because to me it seems like really, our life is always overshadowed by death in the sense that we don’t have the choice to live forever. Being held within that and being constantly reminded of our own mortality—that, to me, is what Yama, the Lord of Death, represents.

Audience: What about the Tibetan skull beads? I’ve seen some people taking these beads from their rosaries to wear as ornaments, such as earrings.

VTC: That’s reminding us of mortality and impermanence, transience and death. Your rosary or prayer beads can just be made of regular, rounded beads. But some people have prayer beads where each bead is carved into a skull. They’re used for doing your practice. I wouldn’t take any of them to make earrings out of if they were meant for spiritual practice. Personally I wouldn’t.

The skull beads again remind us that what’s so critical is to be aware of death while we’re alive, because if we’re aware of death while we’re alive, then death won’t be a frightening thing. Why? Because we’ll have made our life very meaningful. When we remember death, it helps us distinguish what’s valuable from what’s not valuable in our life, what’s important and what’s not important. If we live our life with that kind of awareness, then when we die, we have no regrets about wasting our time or doing negative actions or things like that.

Whereas when we don’t remember transience, when we don’t remember our mortality, then we make big deals out of very small incidents, and we create incredible negative karma, because we latch on to some small thing in our life and think it is a national disaster and create so much negative karma. The awareness of death really helps the mind to discriminate what’s important from what’s not important, and that automatically makes the life more peaceful, and it makes our Dharma practice more effective. The more effective our Dharma practice is when we’re alive, the easier the transition becomes when we face death.

I was telling you before when we went into a lot of detail on death, that for the good practitioners, death is like going on a picnic. Look at Terry (a DFF member). There was something that was so incredible about the way Terry died. He got all the different aspects of his life cleaned up and cleared up, and he wasn’t afraid to die. I’ve never seen somebody die quite like he did with this feeling of real fulfillment about his life. He said to me a couple of days before he went into coma that he just felt so happy to have met the Dharma and to have had the opportunity to practice. It has really helped him, and he felt that that has made his life very full. So he didn’t mind dying, and he had spent time clearing things up with the people he needed to clear things up with, so I think when he died, he didn’t seem to have a lot of distress and regrets.

This is the importance of remembering death, because if we can live each day like that, each day goes by without regrets. We live each day and we have clean-clear relationships with people, whereas when we don’t do that, then you have to go to Steven Levine and tell him in front of a whole big assembly hall how much you regret not telling your mother this or that before she died. If they had Steven Levine workshops in the bardo, everybody would be there going, “I didn’t tell my children this.” “Oh, I was so mean to my husband.” “As an employer, I was really a bully.” If we remember death, we’re going to clear all those things up on a day-to-day basis instead of carrying them around with us.

Audience: Are these images the same in all diagrams of the Wheel of Life?

VTC: No, sometimes the images are slightly different, like instead of a monkey and a tree, you have a monkey and a house. There’re different presentations. But the 12 links are always the same. 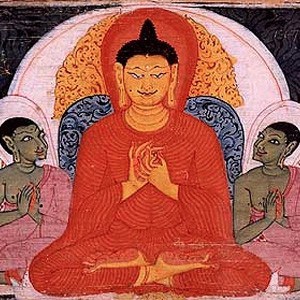 The bardo and taking rebirth

The 12 links of dependent arising: Overview