I recently read a new survey from the Pew Research Center that showed the majority of Republicans and Democrats have few or no friends in the opposing party. Compared with past studies the numbers have changed dramatically. Also, the unfavorable view of the opposing party has increased by a whopping 30 percent. 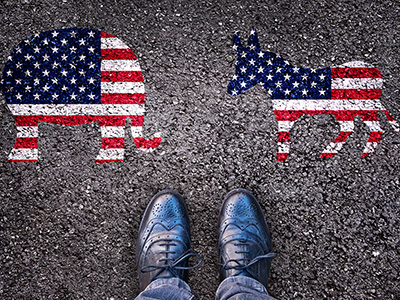 The organizations that I belong to and my religious affiliation conveniently pre-screen most of my friends. (Photo © Delphotostock / stock.adobe.com)

From a personal standpoint I am guilty as charged. The organizations that I belong to and my religious affiliation conveniently pre-screen most of my friends. But what about neighbors and relatives? I live in a neighborhood where the majority is of the other party. I used to go to community functions but my wife and I find ourselves becoming more and more reclusive. We generally keep our political views to ourselves. I just wish others would do the same. Family is a little harder to avoid. Fortunately, those people live six hours away. And if the subject turns to politics there is always another room to escape to or an emergency phone call that I just have to make. I don’t like confrontation so the only other option is avoidance. A civil discourse seems impossible when two sides of a family have such a dramatically different world view. My wife and I try to stay away from religion and politics. Unfortunately, some people just can’t help themselves.

As a Dharma practitioner I certainly want all sentient beings to have happiness and freedom from suffering. I know all the good reasons not to separate people into artificial categories of friend, enemy and stranger. But it appears I am doing just that by holding some people close and practicing “equanimity” on others at arms length. It may be Mickey Mouse equanimity but that is all I am capable of at this time. I keep reminding myself of the Buddhist monk who was imprisoned and tortured by the Communist Chinese for many years. He was finally released and when asked what he feared the most his answer was he feared losing compassion for his captors. I can only aspire to have that same compassion for all beings even if their voting ballots look quite different from my own.