This past Friday, on a sunny morning, in Atlanta, Georgia, a small airplane, carrying four passengers, crashed and burned onto a major highway. All aboard perished. Luckily, no one on the ground was hurt or killed. While I was at work, the accident happened, and of course the news quickly became the topic on the lips of everyone in the office. We all complained about how the ride home would be prolonged by the police investigation and the clean up on the highway. Because of the assumed traffic delays, my self-centered mind accelerated into selfish thoughts that all began with “I want” and “I don’t want,” and frustration arose in my mind.

On the last break of the day, I decided to do walking meditation to calm my mind from the self-centered thoughts. While walking, a thought of reason slammed on the breaks of my selfish thoughts, “Four sentient beings lost their human lives and all you can think about is the traffic going home? At least you still, temporarily, have your human life and a life blessed to have met the Dharma.” I was humbled by this voice of reason and the thought of being delayed in traffic faded and turned into thoughts of gratitude for life in this human body and compassion for the victims and for those who still had the selfish thoughts that I had. 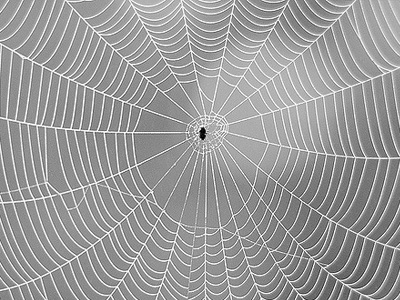 The self-centered mind is like a spider. It creates a sticky web of ignorance. (Photo by Charles Dawley)

The self-centered mind doesn’t finish us off entirely (cyclic existence). It wants more of us. It then wraps us up in more webs (ignorance) and leaves us in a cocoon (the body) where it will feed on us later. But we have the potential to break free from the cocoon, to become something more beautiful and stronger than the spider.

My confidence in the Dharma’s power increased that day, because I saw in my own mind that seeing reality with Dharma glasses makes me respond to phenomena with reason, which in turn make me happier, as the Buddha promised. I now, more than ever, want to drive with the Buddha. He gives great directions to nirvana, which is my real home.