I was on my way home last Friday from another month of work in Hawaii. It is a tedious six-hour flight from Honolulu to Seattle. When I got to my seat in coach there was a very large gentleman sitting in the next seat and about half of my seat. Immediately my self-centered attitude kicked in. I was angry knowing that the next six hours was going to be miserable. I sat down and started fuming. The gentleman did apologize for his large size. He was 6’5″ and weighed over 300 lbs. All I could think about was my discomfort for the next six hours. 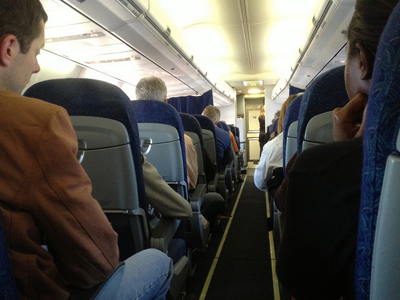 Suddenly my displeasure and self-centered attitude changed to compassion. (Photo by Lynn Friedman)

Thankfully the Dharma kicked in. A little voice said, “Why don’t you talk to this fellow and get to know him,” especially since he was practically sitting on me. For the next six hours we talked. He told me his life’s story and how his large size impacted his life. He didn’t choose to be this big and suffered terribly from it. I went to the lavatory twice. But he was unable to use the facilities because he couldn’t fit! I could imagine how uncomfortable he must have been. Suddenly my displeasure and self-centered attitude changed to compassion.

He turned out to be a very nice young fellow. We talked and talked and before I knew it we were landing in Seattle. My anticipated miserable flight had turned into a pleasurable experience both for him and me. All I had to do was get out of my self-centered thought and have a little compassion for another sentient being.