Isaac shares how participating in Sravasti Abbey’s Winter Retreat helped him to realize the true meaning of freedom and autonomy.

This year I had the fortune to come to the Abbey for retreat, and the experience was truly amazing. Here Dharma is everywhere you look, and the activities in the daily schedule are a constant reminder to practice and take advantage of the precious opportunity we have. Many times I was in awe and felt filled with gratitude for the kindness received from the community. At night when the sky was overflowing with diamond-like stars I would ask myself "Am I dreaming?" I really felt great love and compassion from everyone here.

Then during this year’s retreat, to my surprise I found myself having recurrent thoughts of anger. I was irritated more easily than during any other retreat I have attended and asked myself, "Why do I have so much antagonism while I’m in such a perfect place for practice?" Although the anger did not reach uncontrollable levels, it was a persistent, nagging voice complaining about the schedule, the unplanned offering service hours, the topic, the time available for sleep, the time available for study, the "rush" to get things done and go to the next activity, etc. I started to feel resistance and discomfort, yet was unable to pinpoint the reason or completely release the thoughts.

During retreat I was introduced to the teachings of NVC (Non-Violent Communication), created by Marshall B. Rosenberg. This program is based on getting in touch with our feelings and needs, listening with empathy to ourselves and others, recognizing the violence and harm created when we are out of touch with these, and learning to take responsibility for our feelings, thoughts, and actions. The program teaches a language that can help create a connection with others in which "natural giving" is possible. This giving is done with joy and the desire to contribute to life rather than out of fear of punishment, guilt, duty, or shame.

One day some of us were watching an NVC video where there was a role play about a real situation in which a manager didn’t know how to work with an employee who was continually late and caused conflict with coworkers. In a pivotal moment Rosenberg asked the audience, "What need does the employee have that is so strong that it interferes with others’ well-being?" Jack paused the video so we could think about this. Initially my mind was blank. I couldn’t see his need. Jack played the video again and Voila, there it was in plain sight—the employee’s unmet need was one that I also had but until then was not aware of. He needed autonomy.

Recognizing that need in myself was like taking a huge rock off my back. In a moment it was like seeing through a tunnel displaying reams of memories in which I had fought with myself because I needed autonomy and projected "They’re restricting me" and "They’re trying to  control me." I projected this on to everyone I perceived to be an authority. Most of my life I had been in conflict with people I have perceived as authorities. For years I had done the opposite of what society wanted me to do; I have been rude and uncooperative, because I thought people and society in general were trying to restrict my autonomy.

I saw how much mental energy and precious time I had wasted, how much suffering I had experienced and how much suffering I had caused others when I thought they were trying to  make me behave as a "good" person should, to be where I was "supposed" to be, do what I "had" to do, to say what was "correct" or "appropriate," to have a "real" education, to be a "good" team player, and on and on. I realized that for years my mind had been filled with concrete labels and judgments.

I also remembered how sad and depressed I was when I was doing what is "right" and trying to be a "good" person—in short, trying to be what I thought others wanted me to be—ignoring my own inner wisdom. Around my second year in college I started to rebel, and have done so for years since. I saw the world as an "unfair" place. It didn’t matter whether I rebelled or did what was "good" and expected of me, I didn’t feel inner peace.

I realized that in my confusion I thought that being rebellious would give me the autonomy I needed. How wrong I was! Thinking I was fighting external authorities, I was actually fighting myself. I was the one telling myself I had no choice, that I "should" do this or that.

Once I recognized my unseen need for autonomy, it was clear to me that I wasn’t fighting with anyone on the outside, but was in constant battle with my inner judge, the self-centered thought that created the story that it was "me against the world."

Once I saw myself reflected in the person in the NVC video, I was able to understand why I continuously arrived late to wherever I was going, even when I could have arrived on time. Now I understand why I have quit jobs when I thought what they were asking me to do was not what I wanted to do. I was going against the grain with no skill and was even causing harm to others because the afflicted thought "they’re taking away my independence" would infuriate me, and with that kind of thinking, everyone loses.

The most amazing thing was to see that, in reality, I have always had autonomy. I have always had a choice. I didn’t need to rebel against society’s structures, authorities, or anyone outside. The rebellion that brings true freedom is to rebel against the self-centered thought. Following the self-centered thought is prison. It gave me no choice but to act out my mental afflictions. It restricted my autonomy by not allowing me to be in touch with my own kind heart and to act from that space. 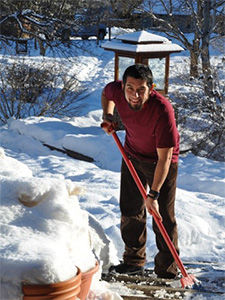 When we make compassionate choices, we think of others’ feelings and consider how to benefit them. That gives us the opportunity to choose how to contribute.

When we make compassionate choices, we think of others’ feelings and consider how to benefit them. That gives us the freedom to choose what to do; it gives us an opportunity to choose how to contribute. With this, a tremendous creative energy combined with joy arises and what could be work becomes a career, a piece of art, a masterpiece, an offering of love.

In every moment, all of us have the choice and freedom to think in a beneficial way. We are constantly choosing what thought to follow and how to perceive ourselves and others. Now I’m in a mental place where I choose what to do that fulfills my heart the most—practicing the Dharma to the best of my ability to be of greatest benefit to all beings. A plus is that in retreat I’m able to do this together with the sangha. Now I can choose to be kind because in my heart I want to, not because I have to be "good." I can choose to cooperate with others because I care about them; I don’t have to prove my autonomy to anyone.

After this experience I can see how many other needs are interlinked with autonomy—support, empathy, appreciation, consideration, understanding, peace, rest, fun, meaning, and accomplishing dreams and goals. I now check why I do various activities and choose to do them with the best motivation I can create. Things that were unwanted chores before no longer seem like tasks but are opportunities to help others. They are gifts, challenging growth tests to see if the heart has really opened. Rosenberg’s statement, "Don’t do anything that is not play" came alive, and I remembered, "highest truth is highest joy."

This retreat changed me profoundly. It left me thinking that creating peace in a chaotic world is not done through changing the world outside, but by changing how I see things, by working with my own mind and cultivating love to the best of my abilities. This is the real way of creating peace.