I wanted to share a couple of powerful experiences I had on the kindness of strangers, the first before retreat, the second during it. 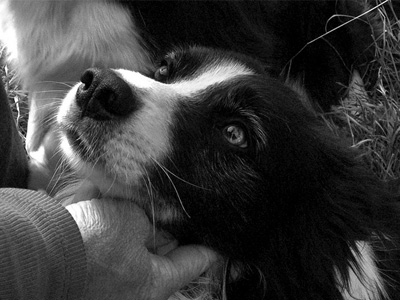 I don’t think I will ever view so-called “strangers” in the same impassionate way. I see this as Grimm’s final teaching. (Photo by Jessie Romaneix Gosselin)

The first one was quite simple, and quite beautiful as well. After I had my dog, Grimm, euthanized, I went about my usual rounds. You have to understand; Grimm went everywhere with me—to work, to the coffee shops, on our lunch-hour strolls about town. Well, for two solid days, wherever I went, simple acquaintances and many complete strangers continually came up to me, inquiring as to his whereabouts. I would simply say, “I had to say good-bye to him.” I was really stunned by the response—eyes tearing up, sincere appreciation for what a beautiful, special being he was, outpourings of compassion and sympathy. I was so affected. I don’t think I will ever view so-called “strangers” in the same impassionate way. I see this as Grimm’s final teaching.

The second really opened something in me. I decided I really needed to purify my relationship to my mother. It occurred to me when driving back to Boise from our family reunion recently that I had never really done this. I seem to take so much for granted! So I was sitting there, and was really surprised how much regret I could stir up for specific things over the course of my life, but the main thing was seeing how, in spite of (or perhaps because of) my mother’s sterling example of putting her husband’s and children’s interests first, I had consistently placed my own interests ahead of hers in my relationship to her. And then it occurred to me: if I have this much regret over how I have treated my mother in this life when I have been blessed with a kind, loving, and selfless mother, what in the world have I done to my mothers in previous lives? And while purifying all that accumulated negative karma, it hit me that these negativities are the precise cause of my difficulties in this life where strangers are concerned. It is because of my selfish ingratitude toward these beings when they were my mothers in previous lives that I have such a hard time relating to them in this life. I realize this may seem pretty obvious but it really sunk in when I placed it in the context of regretting all my insensitivity to my mom in this life.