You are here: Home > Practical Buddhism > Prison Dharma > By Incarcerated People > On Mindfulness > A chosen life
By J. S. B. on Jun 18, 2011 in On Mindfulness

The stone, steel, and glass of the buildings funneled the high sun’s rays down to the avenues, streets, and sidewalks to be absorbed by black asphalt and white concrete. The man felt the heat rising through the street-worn soles of his tattered New Balance 224s. Though his face and body were weathered by sun, cold, and rain, he smiled serenely.

He shuffled along among business people hurrying to meetings on marketing strategies, product lines, and meetings about conducting other meetings; chasing after money, promotions and a corner office. Shoppers sped around him, hauling bags and boxes from Gucci, Saks and The Gap, sipping coffee from Starbucks. They scurried by, grasping for the chicness they’d seen in GQ and Cosmo. The maddening mob talked and texted and checked updated sport scores on their latest cell gizmos, or bobbed their head to the beat of Kelly Clarkson or R. Kelly—plugged into their iPod, unplugged from the world around them.

The man trudged steadily along his familiar path while the world raced by, cycling through new fashions and gadgets, new wars, and old wars and never-ending suffering and pain. He had made this trek every day now for many years. He couldn’t remember not making this daily sojourn. He had once walked in another city, and before that, in yet another city. On and on and on he walked. 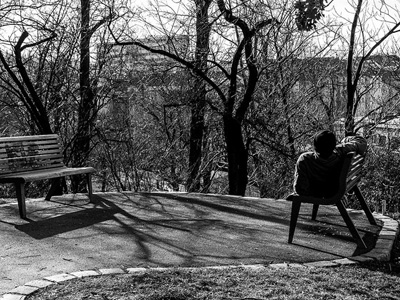 He chose to be unencumbered, he had found true contentment without worldly trappings. (Photo by Ivan Čentéš)

He carried the sum of his worldly possessions in a plastic trash bag. The bag wasn’t heavy for he didn’t own much: a pair of old rubber boots, a winter coat, a bowl, and spoon, a ragged blanket, three books and a few other odds and ends. Living on the streets, he had learned to live simply. He chose to be unencumbered, he had found true contentment without worldly trappings.

Just after noon, he reached his destination, a public park in the very heart of the city. He navigated his regular course through the maze of pathways, passing ponds and playgrounds, walking purposefully through groves of trees and grassy fields where people tossed frisbees and flew kites. He walked by workers on park benches gobbling down their lunches from Panera Bread or the dollar menu at Wendy’s. Some listened to their iPod while drinking iced coffee from Starbucks. Most didn’t notice the man in ragged clothes trekking by; those that did perhaps wondered why a homeless person would be smiling so contentedly. “Must be crazy, or a wino,” they’d comment to their friend who was most likely occupied with the podcast of the highlights from last night’s American Idol.

The man came to the magnificent gardens in the center of the park where he veered off the pathway and walked up to the edge of a bed of flowers and shrubs. Standing in the exact place he stood every day, among irises, peonies, daisies and lilies, he put his possessions on the ground by his feet and stood quietly, gazing down at the white, yellow, red and purple blooms.

He meditated, as he did every day while the people all around him watched and wondered exactly what the crazy wino was doing standing like a statue among the flowers. Children would ask their parents what that “dirty man” was doing; “Shhhh! don’t stare!” they would be told as they were hurried past the man. Others might yell, “Hey statue-man! Why don’t you get a real job ya bum!” The man heard all of the words, all of the taunts and jokes, but understood their emptiness. He continued his meditation, retaining the focus he had honed over years and years.

The purpose of his meditation was the same every day. He’d meditate with the intention of helping all sentient beings escape their suffering. He’d visualize all of them—the beings in the park, the city, the world and all realms—sitting there before him among the flowers, in the green fields; every sentient being sitting there before him. Their suffering and anger and confusion formed a vast cloud of black, grimy smoke which hung over their heads. The man would inhale all of the anger, all of the suffering and confusion, then exhale pure compassion and loving kindness. He took all of the suffering of each sentient being upon himself as he prayed for all to obtain wisdom, tranquility and true happiness.

Those around him didn’t know, couldn’t comprehend why he lived as he did. As they spiraled through life, immersed in their worldly concerns, they didn’t understand how he helped them every day. He received no recognition or thanks, nor did he desire any. It’s just what he did.

Finally, after some time, he took one last inhalation, then exhaled deeply. He then picked up his bag, and retraced his steps back out of the park into the city. He again waded through the pressing rush of the crowded sidewalk, making his way back to his hermitage—a large, lopsided Frigidaire side-by-side refrigeration/freezer cardboard box covered with a sheet of clear plastic underneath a bridge. The man sat at the entrance of his hermitage, opened up an old, leather-bound book, The Thirty-seven Practices of Bodhisattvas, and carefully leafed through the brittle, yellowed pages. The man read. He had chosen this life of a Bodhisattva. He was glad he had.