Correspondence with someone who is hesitant to engage in prison work

Kalen from the Missouri Zen Center told me that you donated some funds for the prison work she is coordinating in Missouri. I was deeply touched that you unselfishly shared your limited funds with her/us as I am sure you need all the money you can raise at Sravasti Abbey. I expressed this sentiment to Kalen, and she said that you have made a pledge/vow to yourself to apply funds received from your books to this and other such work. That is admirable. So thanks for your generosity!

I have a question for you. You obviously feel working with prisoners is very important, and this has been something I have struggled with. I have been slow in getting involved, and my hesitancy has been caused by my uncertainty about the significance of it. I often think our volunteer efforts would be better placed with other groups like the poor, the sick, troubled teens, the drug and alcohol addicted, etc.

I also wonder about the sincerity of prisoners and the likelihood they will stick with practice after they leave prison. I do think it is good to work with those who are about to be released in hopes of keeping them straight and happy and helping them to make the transition. This seems a benefit both to them and to the larger society in which they will soon be living. But working with those who are not getting out for many years, or perhaps not at all seems less worthwhile.

If you have time could you please send me a few lines as to why you think this work is important, and why it is more important than some other social work Buddhists might do?

Thanks for your email. It’s my pleasure to contribute to the prison work the Zen Center is doing. And thanks, too, for your questions about why I see prison work as valuable. Many people probably have such questions.

I guess I should start by saying I didn’t have the intention to do prison work or seek it out. Rather, it came to me. One nice thing about being a Buddhist monastic is that when someone asks for help, I don’t have a choice. I have to help to the best of my ability (which is often limited by time, knowledge, finances, experience, other commitments, etc.) Back in 1997, a letter from a prisoner found its way to me and slowly more letters began to arrive. With the intention to help, I responded. Over time, I realized I was learning much more from the inmates than I was teaching. More about that later. 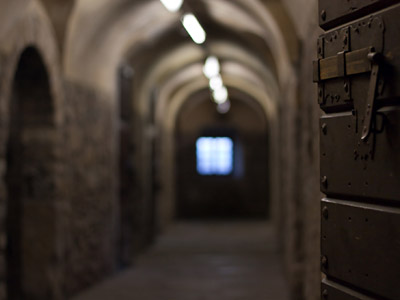 But even if someone has committed a crime, they are still a human being with the Buddha nature and are therefore worthy of respect. (Photo by i k o)

As you noted, there are many groups who need aid: the poor, sick, troubled teens, substance abusers, and so on. Even people who seem to “have it all” are unhappy. They need a different kind of help. Of those of us who want to do volunteer work, each of us has different interests and unique abilities. Accordingly, each person will have his or her own preference about which group(s) to work with. As long as we help others in a constructive way, it doesn’t matter to whom we reach out. We can’t say one way or one group is better or more deserving of help than another.

Of the groups you mentioned that it might be good to help, many inmates belong to one or more of them. They often grew up in poverty, from a family where the parents were alcoholics or drug users. They were troubled teens and many of them suffer from depression or other illnesses that were not diagnosed. So, it’s true, helping people from these groups earlier, before they commit a crime, would prevent a lot of suffering for them and for others.

But even if someone has committed a crime, they are still a human being with the Buddha nature and are therefore worthy of respect. People in general often see inmates as not being members of society. But to me “society” means the collection of sentient beings in this universe. Everyone belongs to society, and there is nowhere we can go where we do not live in relationship to society and everyone in it. We exist interdependently. We exist in relationship to prisoners.

It’s easy to think that helping someone who is about to be released from prison is useful, because that will facilitate their re-introduction to the busy world. But people in prison have lives too, and their lives influence many lives on the outside. I would love for a journalist to do a long story on “Sunday morning in America” and feature all the people in prison waiting rooms. There are parents, there are wives and a fewer number of husbands, there are kids who grow up with a prison waiting room and visitor’s room as part of their environment. When one person in a family goes to prison, an entire family, as well as a group of friends, is impacted. Influencing one prisoner has ripple effects that go far and wide.

Society exists in prison, too. There are real people there, not only inmates, but also guards, chaplains, maintenance crews, etc. Influencing one inmate can go a long way and can save a life. One man told me that reading Working with Anger at a crucial time for him helped him calm down and look inside when he was on the verge of violence. That may have resulted in saving the life of another inmate or a guard and preventing grief of a family should someone have been killed.

Furthermore, in working with inmates, and with people on the outside for that matter, I am just as concerned with aiding their future lives as helping this life. I am concerned with their progress on the path to enlightenment, and that goes far beyond this one life. Some of the inmates I’ve been in touch with are very sincere Dharma practitioners, and although there are many obstacles for them in this life, in other circumstances in future lives, they may zoom along.

Sure, some inmates may be manipulative, but people in prison don’t have a monopoly on manipulation. Lots of people outside do it too. But the inmates who are interested in the Dharma “get” it in some way that many of us on the outside don’t. They are intimate with the suffering of cyclic existence. They can see how their own ignorance, hostility, and clinging attachment cause suffering. They are often more willing to admit their weaknesses and mistakes than those of us on the outside who always want to look good in front of others.

The prison environment is harsh. It’s no picnic being in there. Just hearing about love and compassion brings happiness to their minds. They know they’ve caused pain and they want to change. The possibility of developing bodhicitta and being of benefit is something that resonates and inspires them. It makes living in the chaos and violence of American prisons doable.

I was discussing with another nun who does prison work about having to make a choice between visiting one prisoner in a far-off prison that it takes hours to get to or teaching a Dharma group of middle-class people in the city. Time is an issue, but we agreed that most of the time, we’ll choose to visit the prisoner. Why? That one person really appreciates our visit. He listens closely; he values what he hears; he’ll think about it later and try to practice. Inmates always say, “Thank you for coming.” They know it took me hours to get there and they appreciate it. People in city Dharma centers sometimes don’t think how exhausting it can be for a teacher to travel to their city to teach.

Some of the people continue to practice the Dharma after being released. Others I’m not sure because they don’t write much afterwards. But regardless, I’m sure the Dharma has influenced them in a positive way. They have told me as much and I can see it in their letters. Benefiting someone, whether or not they keep up a formal meditation practice, is useful. In any case, think how many people go to Dharma centers and don’t keep up their practice after a year or two. Still they benefit from what they’ve heard.

I’ve learned a tremendous amount from the inmates. Most of the men I visit or write to have done the crimes that I fear the most. Previously I would have shirked away in fear. But I’ve learned that they are human beings just like me. Their life is more than the one act that landed them in prison. I can no longer put them in a category-rapist, murderer-and ignore or discard them. They are people with a rich life experience. Their sharing with me teaches me things I could never learn at a university. As a simple example, we can study sociology and learn statistics about poverty and broken homes and say, “That’s horrible,” and go on with our lives. But try listening with your heart to one person who has grown up in poverty with an alcoholic parent. Try listening to someone who has lived on the streets since he was 12 years old tell you about his teenage years. You’re going to get a firsthand understanding of the social, political, and economic dynamics of society.

Thank you for your thoughtful, detailed comments. They were entirely useful. It was pure Dhamma and quite inspiring. One point that I had not considered and that touched me was the ongoing relationship between prisoners and their families. As the Dharma affects the prisoners, it should also have some impact on their families, and that is a wider benefit than I had realized.

Also, I had not thought enough about the extent to which they are still a part of society as a whole. Even if we decide we don’t want to work with prisoners/convicts, some of the people we work with on the outside may have been or may be prisoners in the future anyway! Or some of those we work with outside prison may be family or have close relationships with prisoners. It is impossible to completely separate prisoners from the rest of us—there is a continuum of interpersonal relationship from prisoners to non-prisoners. And we are all people in one society.

I wish you continued good health and happiness,