Nicole Ackerman is Assistant Professor of Physics and Director of the Center for Teaching and Learning at Agnes Scott College (read her bio). She wrote the following letter to Venerable Thubten Chodron.

Nicole Ackerman has been teaching science to Tibetan Buddhist monastics through the Emory-Tibet Science Initiative (ETSI), and is passionate about teaching science especially to the nuns: Connecting women scientists and Buddhist nuns.

She met Venerable Chodron at the 2016 Emory-Tibet Symposium and has since come to visit us at the Abbey. She continues to update us on her efforts to bring science education to nuns.

I hope you are well and that all is flourishing at the Abbey. I am emailing from Mcleod Ganj. I finished teaching at Drepung Loseling a few days ago, and wanted to share an update on how the nuns did in their physics course as part of the Emory-Tibet Science Initiative. Please share the information with others who might be interested. 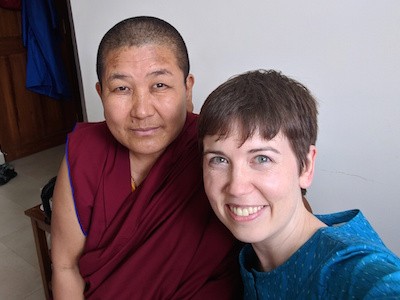 We again had 41 nuns from the same 5 nunneries, though a few of the nuns were new from last year. We were again teaching at the Drepung Loseling Meditation and Science Center, which has been finished since last year. The nuns (except for those from Janchub Choeling) stayed at one of the Drepung Loseling guest houses, next to the main temple.

This year I co-taught with Prof. Amy Lovell, one of my colleagues from Agnes Scott College. Our translator was again Tashi Lhamo, who now works as a teacher at the Science Center, and we were assisted (in both teaching and translating) by Dr. Tenzin Pasang, who is the science director at the Center. I was very excited to work with the nuns again, and Amy was thrilled to have the opportunity to teach the nuns (this was her third year teaching the monks).

Before physics started, the nuns studied mathematics for a week. Last year their lack of math skills was a big challenge—it is difficult to perform any measurements if decimals are a new idea. By the end of their math course this year they had made significant progress—the math test average was quite high, and it included a number of sophisticated algebra problems. The math teacher (Lhakpa Tsering) had asked us what we needed covered, and he did an incredible job teaching the material to the nuns in such a short period of time. Their math skills exceeded those of the monks this year!

The 2nd year physics curriculum covers mechanics—motion, forces, and energy. This is very different from the 1st year curriculum, which provides an overview, as we have the time to go in depth into the different topics. Amy and I have both taught year 2 to the monks, but found that we could cover the material in greater depth due to the nuns’ mathematical skills and doing more hands-on activities in this smaller class.

Here are some pictures [see below] from the class, especially of the experiments the nuns did: measuring the velocity of rolling marbles, timing when a dropped ball reached different heights, experimenting with forces, balancing torques, and investigating conservation of energy.

The nuns are impressively dedicated to their learning. After having three 1.5 hour class sessions with us, the nuns (staying in the guest house) returned every evening for another 1.5 to 2 hours of discussion and review. I understand that the Janchub Choeling nuns had a similar review every evening, and they came back to the center for the review before the test. In class, they frequently asked questions when they didn’t understand the material and were quick to volunteer answers to questions we posed. We used color response cards to see everyone’s answers, and we usually had 100% participation (which did not happen with the monks). When the class favored two or more different answers, the nuns were willing to do out the problem on the board or explain their reasoning, even if they knew there was a high chance that they were wrong. That would not happen with American students!

One memorable event was when we were discussing energy. We could see that there was some confusion on a specific point, so we put an unstretched spring on the ground and asked if it had any energy. Most of the class said yes,but if it is unstretched, not moving, and on the ground, the correct answer is no. We tried to reiterate some of the basic points, but they still said it had energy. We then asked them to debate the question—one volunteer from each perspective came forward, but soon everyone was jumping in! While the majority of the class still had the “wrong” view after the energetic debate, they were able to clearly and concisely explain their reasoning to us. The Tibetan word we use for energy (ནུས་པ) means “ability”, so they hadn’t understood the distinction between the ability of an object to store energy, versus an object having energy at that specific time. While we try to be cognizant of these vocabulary challenges, neither Amy nor I had previously heard about this issue when we previously taught the same subject, though certainly this was a misconception those students had as well.

Energy was also a topic with some connections to their Buddhist studies, in particular, the energies that people have to do different things. Of course, the scientific understanding of energy in the body is also the realm of chemistry and biology. One nun asked where our energy goes when we die. We briefly discussed that the chemical energy would stay in the body (to be consumed by fire or worms) and I encouraged them to talk to the biologists about it in more detail.

We were very happy with how the nuns performed on the final test. Their average was a 65%—the monks had an average of about 50% on the same test this year. We wanted to use the same test given to the monks, so there were a few questions that covered material we hadn’t stressed. Last year the different nunneries had a range of different averages—this year the average was more consistent from nunnery to nunnery.

During the summer there is also an Emory program that brings college students to Dharamsala and then to the Science Center to learn about Buddhism. The students work on different projects, and many of the students wanted to interview nuns for their projects. There are also “Buddhism” and “Science” nights, where either the students pose questions to the monastics or vice versa. This year, the nuns were invited to participate in one round of Buddhism/Science nights. I was there for the Buddhism night, and the nuns did an amazing job answering the questions of the students. The students were quite impressed with the quality of their answers—a bit more clear and concise than the monks’ answers had been. Some of the questions the students asked focused on gender, such as why important reincarnations happen more frequently in male bodies. The nuns replied that historically men had more power, but perhaps now we will see more important teachers reborn as girls.

After the nuns’ physics class ended, I stayed at the center for a few more days. I had been requested to tutor Ani Dawa Chonzom in physics, which is on the 4th year of the Geshema examination. It was wonderful getting to know her over 3 days. She showed me videos from when she visited Sravasti! I appreciated her great humor and how dedicated she is to her education. We covered a lot of material over three days, but she quickly grasped a number of sophisticated concepts. At one point I was explaining radioactive beta decay and oversimplified the process. She immediately noticed that charge was not conserved, so I provided a more full explanation.

In preparing to tutor Ani Dawa Chonzom I tried to gather as much information about the Geshema science test as possible, and was surprised to find out how separated it is from the efforts to teach (and test) science to the Geshe students. The ETSI faculty, translators, and associated monks are the ones who write the science questions for the Geshe students, but none are involved in the Geshema test. Multiple people even thought that the Geshema test did not have science on it! The Geshe science test questions are multiple choice, while the Geshema test questions are an essay format. Some of that makes sense logistically—there are far fewer Geshema tests to grade—but it also means the nuns have a much harder test! I wish that the nuns received as much structured science instruction as the monks are receiving.

I hope that I can keep teaching science to the nuns in future years. However, next year is slated to be the last year where a full slate of Western faculty are brought for the ETSI summer program. I have heard different statements of what will happen after that, but it seems like it might be based on strengthening the year-round science instruction and/or using local teachers. I have been told that the current cohort of nuns will finish their 6 year program but I am unsure if that will be only with local teachers after next year. I may not have the opportunity to teach the nuns next year—there were many female physics instructors this year (yay!), and many expressed interest in teaching the nuns. It may no longer be my turn!

For the next two weeks I am studying TIbetan at Esukhia, in Mcleod Ganj. The little bit of Tibetan that I have learned over the past 3 years has been very beneficial while teaching in India, so I hope this focused study will enable me to do even better next year. If the opportunity arose to teach long-term at the Science Center, at a nunnery, or otherwise focus on science education for monks and nuns, I would take it. I know my ability to be of benefit is greatly limited without Tibetan. If next year is my last year teaching in ETSI, I imagine that I may spend future summers studying Tibetan until an appropriate opportunity arose.

Thank you for all of the support you provide for the nuns’ education and for everything that Sravasti does. I feel very fortunate to be part of the large Sravasti circle of friends and know that it benefits me greatly. Today I met up with Cindy Shaw, who is studying long-term here, and she gave me a very helpful tour of the area. I hope that I can return to the Abbey this winter, unless I am back in India teaching then!

With gratitude and warm regards, 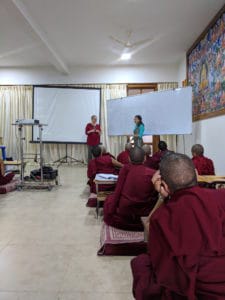 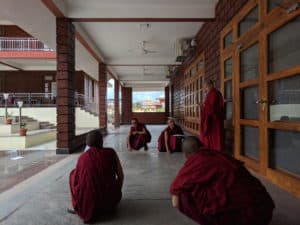 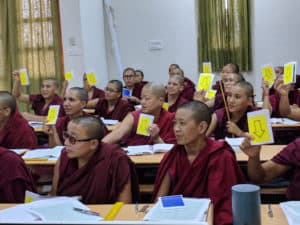 Students respond to a question. 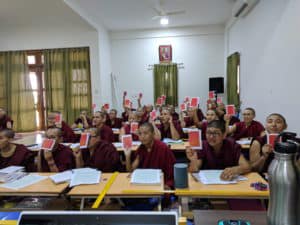 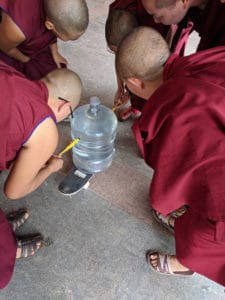 This group of nuns finished the assigned activity (one applied force) and started experimenting with two forces. 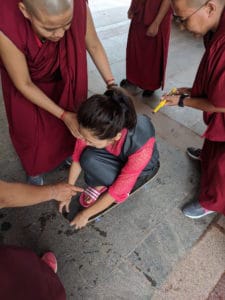 After water bottles were pushed, people were pushed! Importantly, no one was hurt. 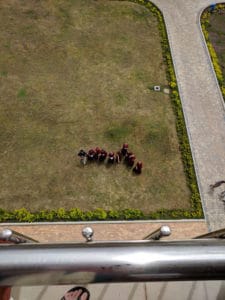 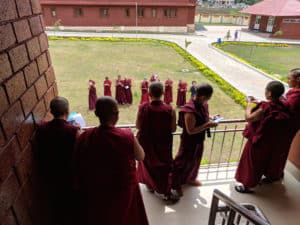 Nuns recorded the time the ball passed them, with different groups at different floors (heights). 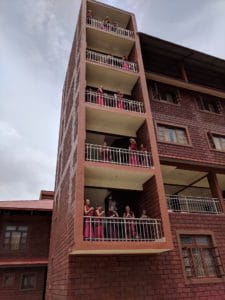 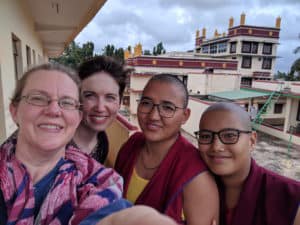 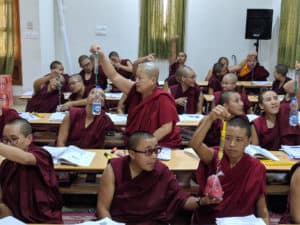 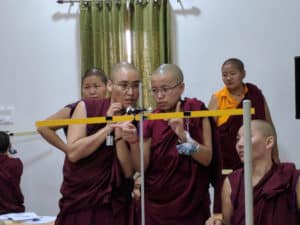 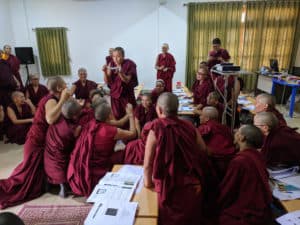 Debate about the energy of a spring. 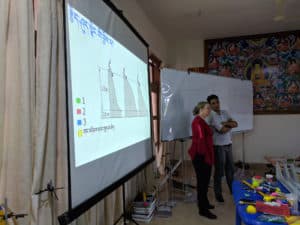 This particular question is one I give to my calculus-based physics students and is particularly tricky. It took some time, but I think everyone understood it! 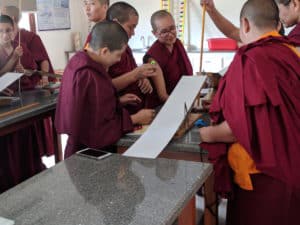 Conservation of energy lab – involved multiple measurements and multiple calculations. Their data and results were just as good as when I tried the lab myself! 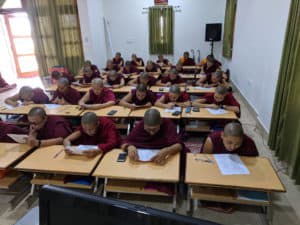 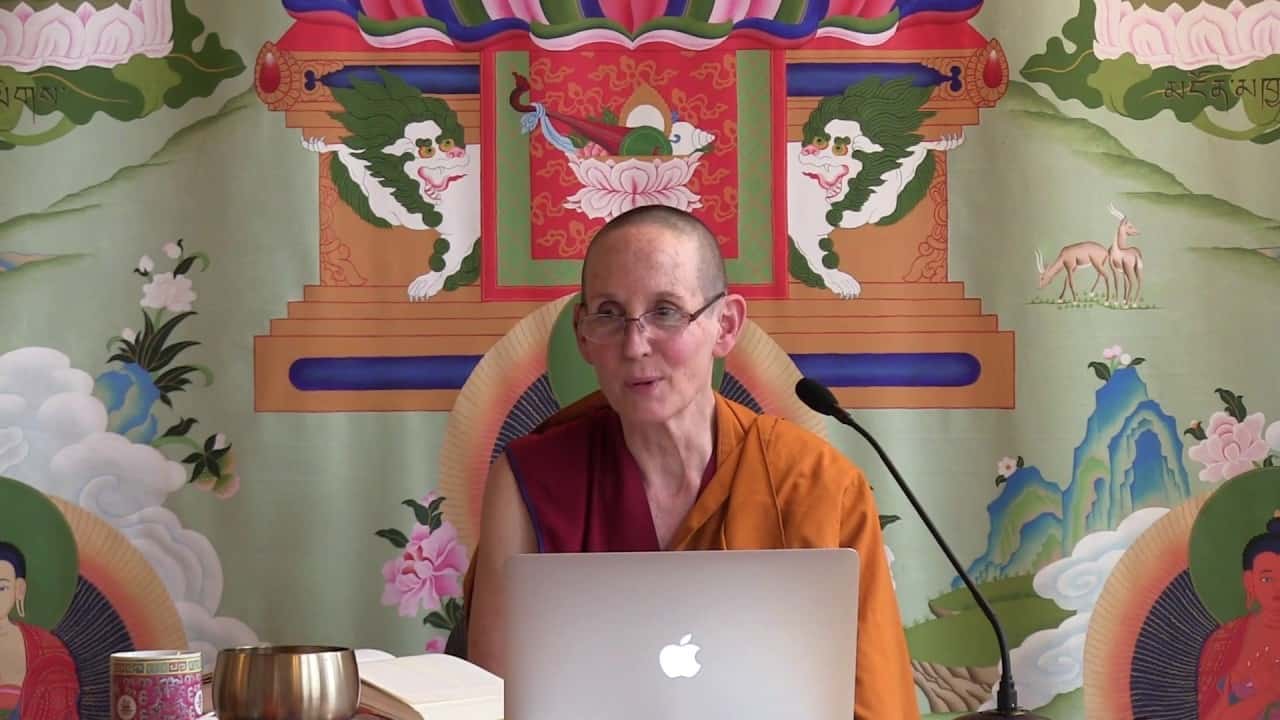 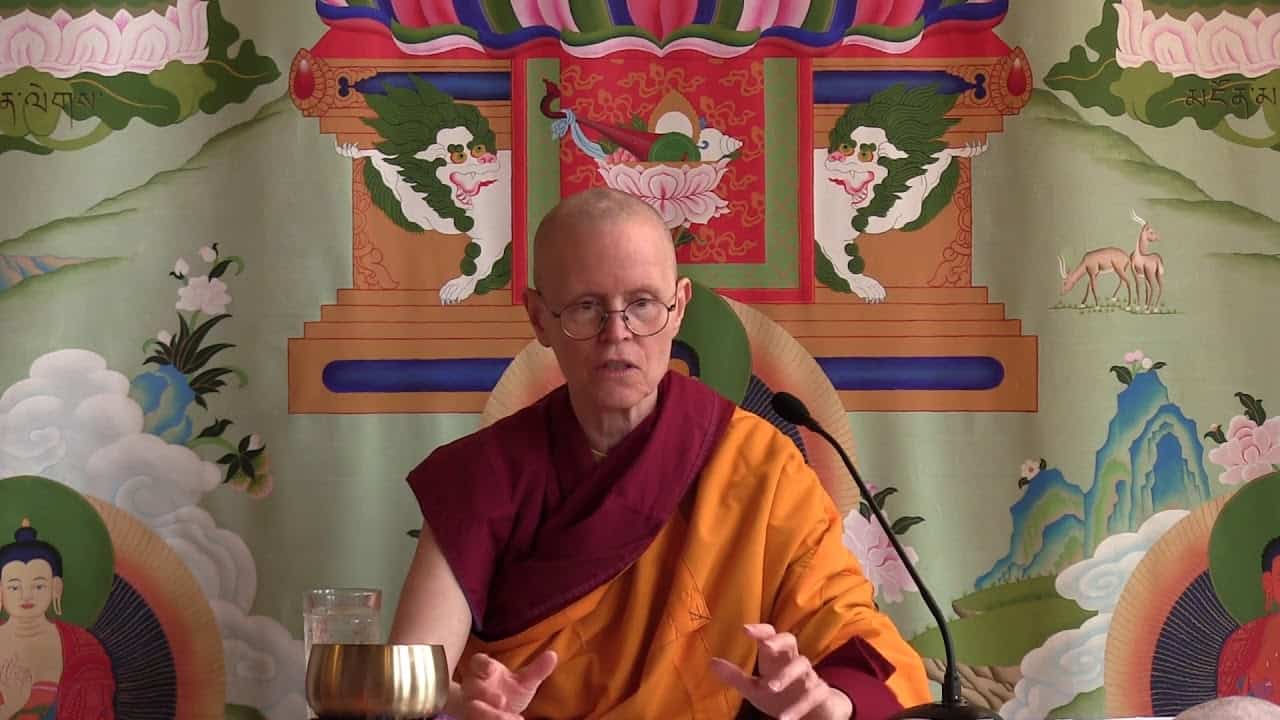 The object of negation