In September, 2015, Venerable Chonyi visited the McNeil Island Correction Center in Washington State to help the prison’s Buddhist study group consecrate and celebrate the new meditation pagoda, conceived, paid for, constructed, and consecrated by the residents of the center.

“Wouldn’t it be great,” mused a Buddhist practitioner on McNeil Island, “to have a quiet place, something like a stupa or a pagoda, where we could meditate together.”

That’s a reasonable aspiration, except that McNeil Island is the site of a Washington State Corrections Center and the practitioner with a beautiful vision is in prison there. The idea inspired the prison Dharma group, however, and together they vowed to pursue their “impossible dream.”

And they succeeded! Despite prison bureaucracy and all the other obstacles that can arise, the group successfully petitioned for, acquired, and constructed a “pagoda”—a six-sided, half-walled cedar gazebo, about 12 feet in diameter—a sacred space in the prison yard for meditation and other spiritual activities. 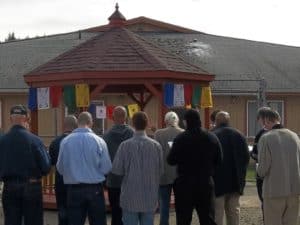 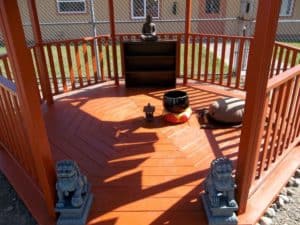 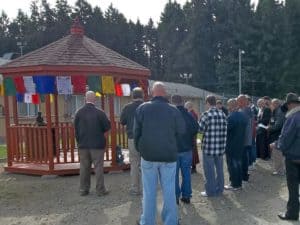 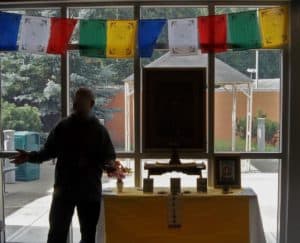 Concecration of the new pagoda.

I joined three Buddhist volunteers from the Zen tradition, prison officials, and Buddhist residents to help them consecrate and celebrate in a daylong “Buddhist Banquet and Pagoda Dedication.”

Amidst the joy of the day, there was a pervading sense of amazement. Although they had pulled off this feat with their own hands and hearts, the McNeil Island residents seemed to not quite believe it had happened. And they were justifiably proud—a rejoicing-kind-of-proud—that I and the other visiting Buddhist volunteers encouraged in our talks with the men.

Metta—loving-kindness—was the theme for the day, and it soon became apparent that loving kindness was the force that brought this meditation pagoda into existence. The sincerity of the Buddhist group persuaded the new chaplain to go to bat for them. His enthusiasm kindled the kindness of the prison CEO. Support from both of them was necessary to get the project through the maze of prison regulations.

The project required the Buddhist group to cooperate together on planning and execution, and they in turn invited the participation of others.

Because McNeil Island is, in fact, an island, they had to arrange for building materials to be ordered, delivered, ferried over from the mainland, unloaded, and safely stored until they were ready to build. Over time, it seems the entire prison population got involved in some way, and enthusiasm grew.

The group put out a call for anyone who had worked in construction to come and help, thus bringing together men with a diversity of philosophies. They also had a diversity of ideas about how to put the pagoda kit together. Several of the non-Buddhist volunteers spoke with something like awe at how they managed to work out their differences of opinion and work together for the common cause.

One fellow asked the group, “How many religions does it take to build a pagoda?” “Five,” he continued, “Buddhist, Christian, Native American, Pagan, and Atheist,” the professed faith of each person directly involved in the construction, “and we worked out our differences and got the job done peacefully.” His face beamed satisfaction, tinged with disbelief.

For me, it was a joy to bear witness to the success of this project. “This pagoda came from goodness,” I told them. A virtuous project like this could only come from a virtuous cause, a fact I wanted to emphasize.

It’s hard enough for people on the outside to get over our ordinary, low-self-esteem view and recognize our Buddha potential. How much more so for people who have made mistakes, have harmed others, and landed in prison. One young man repeated incredulous gratitude to the Buddhist guests that came to celebrate the pagoda. “You know what we’ve done,” he said to me. “I can’t believe you would come all that way to visit us!”

One by one, over the course of the celebration day, McNeil Island residents shared stories of the power of loving kindness. They especially noted the care of their Buddhist group leader, whom I’ll call Kevin, whose compassion inspired them to try his methods for themselves.

“I never thought much about Buddhism,” said one dapper man in his 60s, “because I never heard of an African-American Buddha … until I met him.” He pointed to Kevin—a long-time Buddhist and longer-time prison inmate, a large man with a cherubic face and gentle smile.

“I watched how he reached out to everybody,” said the man I’ll call Geoff. “Didn’t matter who—inmates, guards, visitors. He had a smile, a kind word, an extended hand for everybody. And I thought, ‘What is this guy up to?’ When I started coming to the Buddhist group, I found out.”

Geoff went on to describe his first experiment in testing Kevin’s—that is to say, Buddha’s—methods on a fellow he particularly disliked. Geoff’s enemy served on the breakfast line, and every morning, he slapped Geoff’s food on the plate with hostility. Geoff first tried saying, “Thank you,” for each serving, even though he was still seething inside. Learning to apply thought training, he began think to himself, “Without this man, I won’t be eating at all,” and so his “Thank you” became increasingly genuine.

One day it occurred to him to say, “Good morning!” His enemy was taken aback with that one. So “Good morning” and “Thank you” became Geoff’s norm. Slowly, over time, the enmity turned to friendship. And Geoff, who now considers himself Buddhist, finished his talk exclaiming, “This Buddhism stuff really works!”

For me, their stories illustrate the transformative power of one person’s kindness. And the power of the Dharma to transform lives.

With the completion of the pagoda, the Buddhists decided to share their sacred space with the other spiritual associations in the prison. Any group can sign up to use it, and once surveillance cameras are in place, individuals may be able to use it for private meditation. That’s an unheard-of privilege in prison, but the chaplain is hoping it will work out.

A pagoda is the Chinese version of a stupa, representative of the Buddha’s mind. May this sacred presence in the gravel yard at McNeil Island Correction Center, enclosed by 12-foot fences and razor wire, rain its enlightening influence throughout the prison, growing loving kindness in the hearts of all who use it to find inner peace.

For an update on this project, including new photos, see The pagoda project: An update. 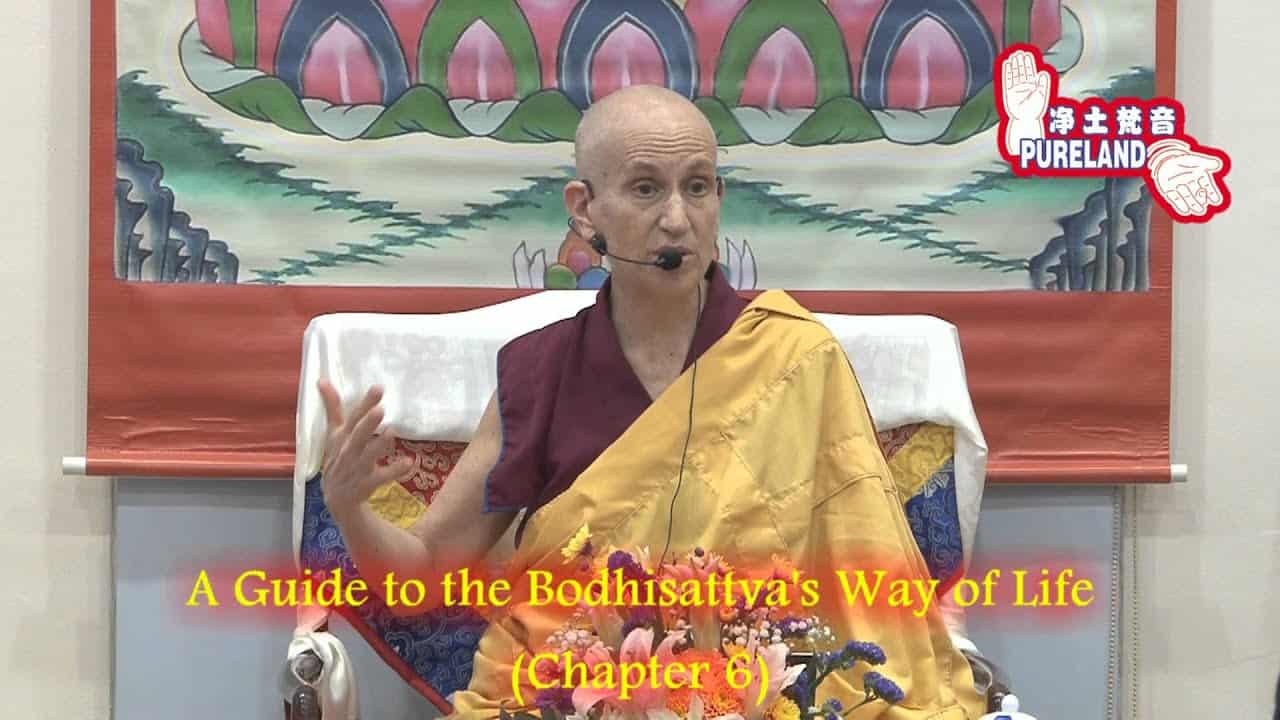 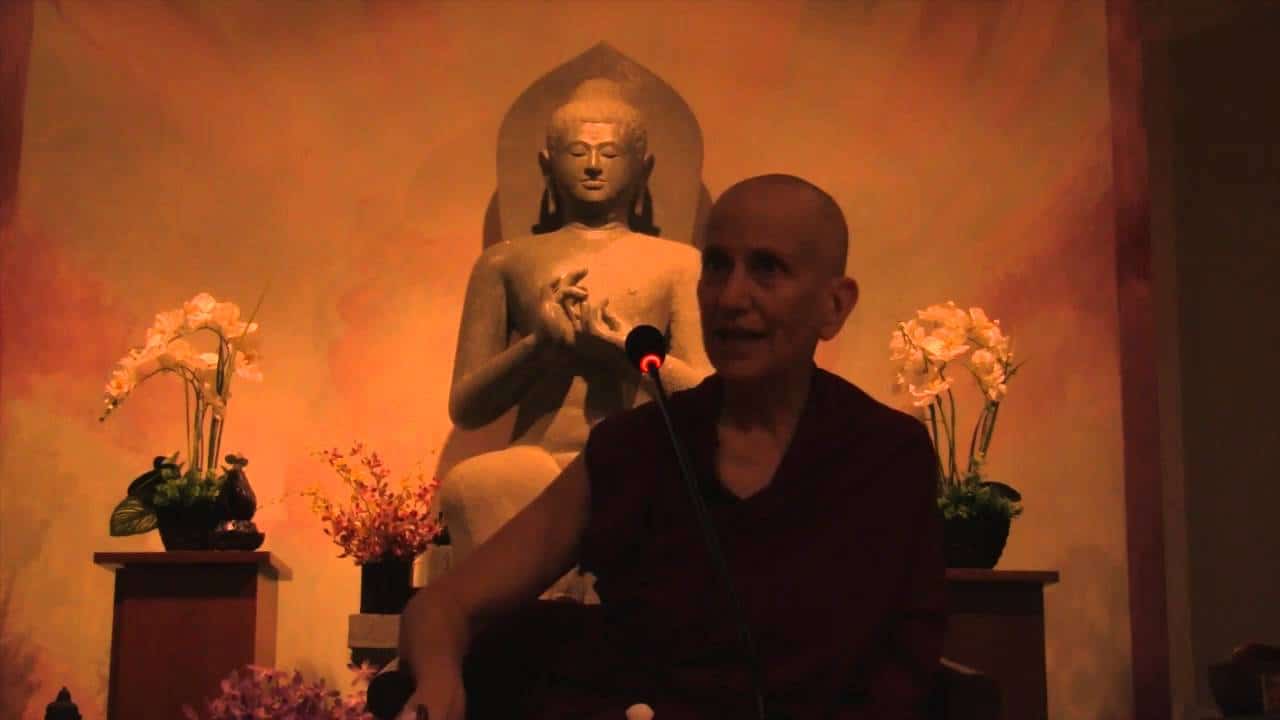 Areligious Buddhism: Is there such a thing?