In the face of violence

In the face of violence

After the terrorist attacks in Paris in November, 2015, several Dharma practitioners wrote to the Abbey to request guidance on how to work with the anguish they were experiencing due not only to the violence of the attacks but also to the violence of the world’s response. Others, such as Tanya and Heather, shared with us their reflections on dealing with it. We thought to share their writings with you.

Another war, another mass shooting, another suicide bombing—how can I have any influence in ending this carnage? That mayhem which seems so far away and intractable is at one end of a pipeline or continuum and the other end is right here.

When I notice the word deserve showing up, when I believe that I or someone else deserves something, my resilience and compassion decline, my coerciveness and impatience increase. I focus on outcomes and shortcuts. I’m on the violence continuum. I buy into the myth of redemptive violence.

This myth—the idea that someone deserves punishment “for their own good” or for “the good of society”—this key concept that makes it easy to be violent—is so pervasive that we seldom recognize it as myth.

Once a person, a group, or a culture believes someone deserves punishment, it’s a small step to killing. Once we accept that some people “need to be killed,” the only remaining question is “Who?” Who dies? Who decides? No wonder we have mass murder on a regular basis.

So what to do? 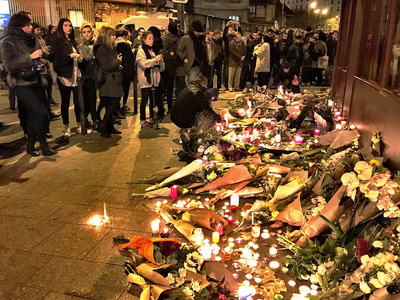 When my heart is open and my mind is compassionate, I connect deeply with others and we mutually experience joy and healing. (Photo by Roberto Maldeno)

At the times my heart is open and my mind is compassionate, I connect deeply with others and we mutually experience joy and healing. Strangers become close friends.

I have a clearer mind, happier heart, and a better understanding of Dharma in the presence of His Holiness Dalai Lama than any other time. I imagine his self-connectedness, authenticity, and unconditional acceptance is communicated to me (and everyone else there) in a non-verbal, direct way and I respond by becoming a better me—sympathetic vibration.

My guess is that the miraculous events of healing and awakening described in the Sutras and Gospels flowed from Gautama Buddha and Jesus being deeply self-connected and present, unconditionally compassionate and accepting. Ordinary people respond to extraordinary compassionate attention and become extraordinary.

When I’m full of self-concern, feeling unconnected and “under-resourced,” I don’t connect with others compassionately and don’t care. When I’m aware of my feelings and act in alignment with my values, I interact with others and myself in powerful healthy, healing ways. Hmm, seems pretty clear what to do.

Changing the world one positive interaction at a time may seem improbably slow and difficult—until I look at the failure of any other way.

Despite the bloodshed in Paris last Friday night, what I have found most disturbing is the aftermath. While claiming moral high ground as the religious faithful of a “Christian” nation, all over the US leaders and citizens spew lies and incite fear. Again in the face of great hardship and pain, we, the American people, close our hearts to those in greatest need as we demand to close our borders and insist on obliterating our “enemy” off the face of the earth. This makes me profoundly sad and I’m finding it much harder to digest than the actual acts of terrorism.

All the harm in the world is done out of ignorance; out of belief in this inherently existent “I;” belief that whomever we are right now is cast in concrete. I, too, fall for this ignorance with my righteous indignation: Why can’t we do better than this? Why do we always have to react with a heavy hand and seek to destroy anything in our path?

I have been restless this past week, distracted and discouraged. I’m mourning not just for the Parisians, but for us as a nation. Perhaps I should mourn for myself as well. Because I too am not who I appear to be.  All the potential to do the actions I condemn in others surely lies dormant on my mindstream, waiting for the right conditions to ripen. Am I any different? Haven’t I been/can’t I be that suicide bomber? Haven’t I been/can’t I be a politician spreading lies to achieve my own purpose and inciting fear for my own gain? Haven’t I been/can’t I be an ordinary citizen afraid for my own and my children’s lives, shutting out the rest of the world in a desperate attempt to find a sense of security and safety in an uncertain world? How many times in the last year, the last month, the last week have I walked away from an opportunity to benefit someone who needed it? Under the tyranny of “I,” I’m enslaved to its propaganda and violate my own aspirations, my own potential. How can I fault other for this same failing?

As long as I am under the influence of ignorance, affiliations, and karma, I have the potential to become the very things I now condemn. Perhaps it should be no surprise that samsara thrives under the influence of these vile afflictions. And yet somehow it has to stop. It feels big and it is. I’ve fed self-grasping since beginningless time, as have we all, but there is an alternative. Those karmic seeds don’t have to ripen and we don’t have to keep living under the shadow of our confusion. What to do but go for refuge? What to do but purify? What to do but be a voice of peace in an angry room?

Heather Mack Duchscher has been studying Buddhism since 2007. She first started following Venerable Chodron's teachings in January 2012 and began attending retreats at Sravasti Abbey in 2013. 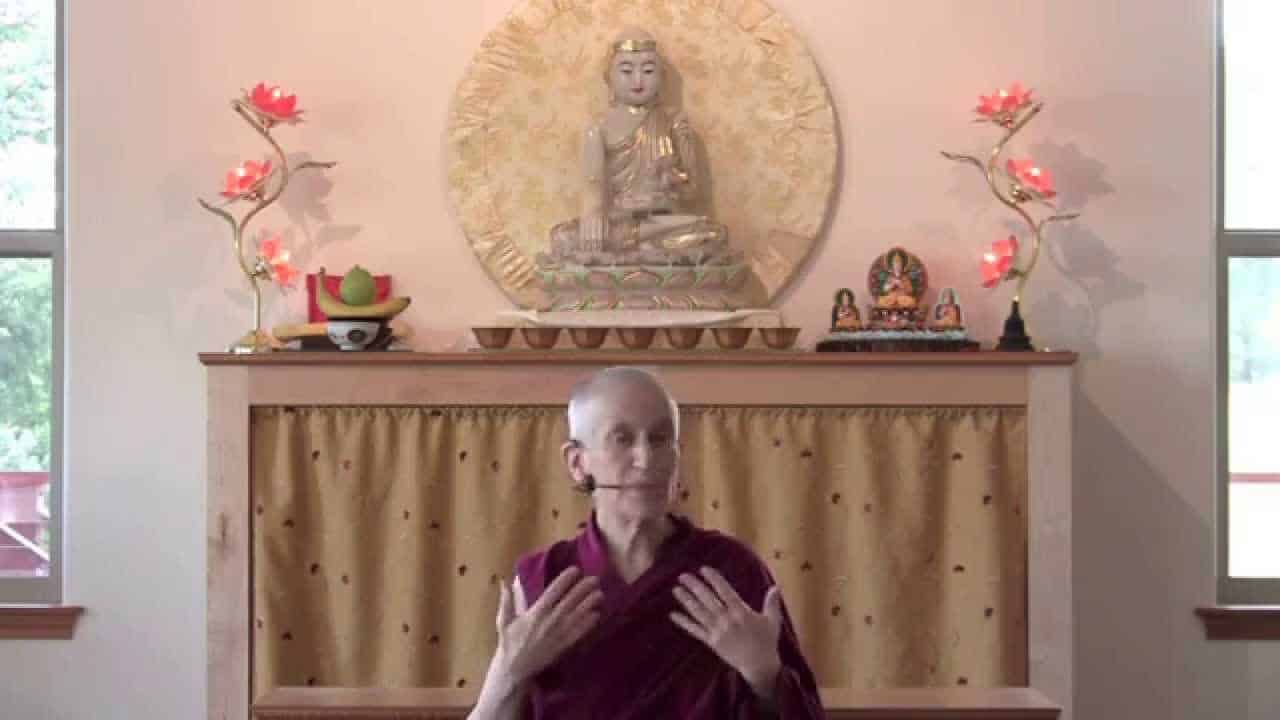 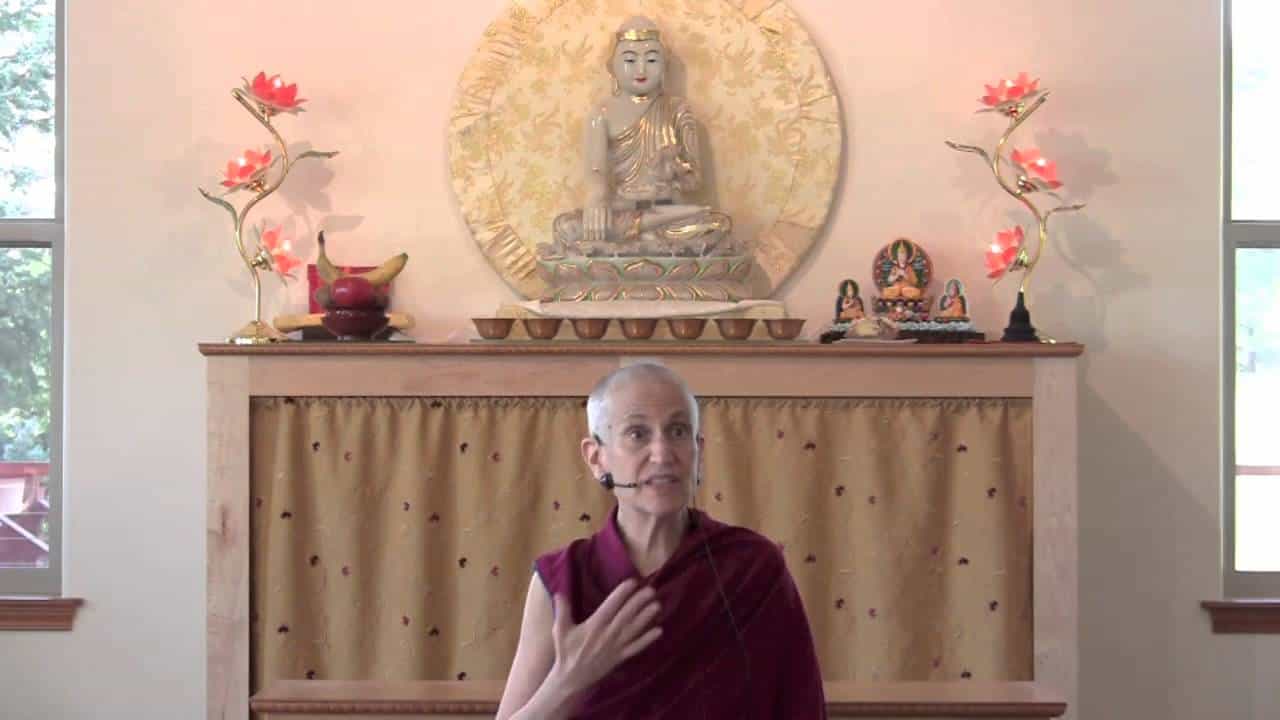 Relying on the Dharma