For over two decades, Western Buddhist monastics from many different Buddhist traditions have been meeting in fellowship to get to know each other and to talk about what it’s like to be a Buddhist monastic in the West. We discuss how to go about forming monastic communities, keeping our precepts, and spreading the Dharma in the West, where most people don’t know what our robes indicate or why we shave our heads.

The 21st gathering was held at Sravasti Abbey this year, fulfilling a dream we’ve had for many years. Until now, we haven’t had the space or the infrastructure to host a big gathering and to welcome an assembly of “those intent on virtue” (the translation of the Tibetan word for “the community of monastics.”)

It is due to your kindness, our supporters and volunteers, that we were able to host this gathering, and all the monastics who came expressed their gratitude to you. In fact, Abbey residents had to be careful not to get attached to the praise we received—so many people commented on the beauty of the Abbey and the land, and on the kindness and harmony they felt in our community.

The theme of this year’s gathering was “The Challenges and Joys of Monastic Life.” About thirty monastics participated; in addition, some members of the resident community joined in sessions when they were not busy serving.

The organizers asked me to give a welcome and keynote talk on the first night. Given our conference theme, I spoke openly of the many challenges in my monastic life and the Dharma principles and practices that have helped me to face them, especially my strong conviction in the law of karma and its effects. I spoke also of my joy at being a monastic: ordaining was the best thing I ever did in my life, and my refuge has only deepened over these thirty-eight years. I wanted to instill in the Western monastics—especially the new ones— how precious is the opportunity to live “the homeless life,” and that keeping our ordination is more valuable than any challenge we can face.

On our first full day, we shared our original intentions for ordaining as well as the challenges we’ve encountered in sustaining that intention. It was inspiring to hear the beautiful, heart-felt motivations people had when they “left the home life” to ordain. We also empathized with the challenges of dealing with our ignorance, anger, and attachment, as well as with external difficulties such as lacking support, or being so busy serving that we could not study or practice as much as we wished. In the evening we broke into small groups to discuss topics such as monastic education; power, hierarchy, and patriarchy; and cultural differences with our Asian teachers and supporters.

On the second day Bhikkhu Bodhi discussed the role of monastics in society and how holding the precepts inspires faith in others and reminds society in general of the value of living a simple life. We also had a very interesting discussion about karma and rebirth, among other topics. 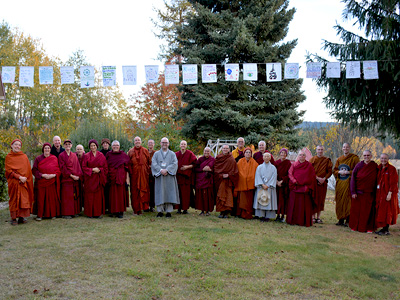 Some of the participants of the 2015 WBMG.

In the late afternoon, we walked down to Tara’s Land—the Abbey’s newly acquired adjacent property—for a lovely blessing during which, one by one, each tradition chanted cherished verses from their traditions. It was inspiring to hear the Dharma in such a variety of languages and melodies. Many monastics had also made prayer flags earlier in the day by writing auspicious verses and aspirations with markers on pieces of cloth. To conclude the blessing ceremony, we threaded all the prayer flags with a piece of rope and hung them between the house and a large tree in the yard. The celebration was marked by the auspicious appearance of a rainbow-colored sun halo that appeared in the sky just before we began. 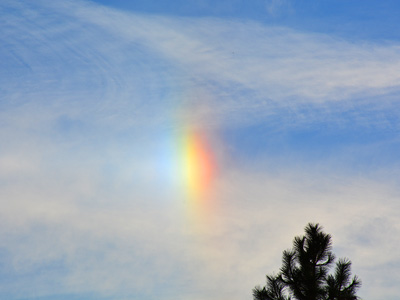 The sun halo that appeared in the sky just before we began the blessing.

The panel on the third day, entitled “In the Trenches,” was especially interesting as five monastics described their efforts to establish monastic communities and to teach the Dharma in the West. That afternoon three senior monastics shared their reflections on what we can learn from the past and what monastics need to focus on in the future. While the three speakers—Bhikkhu Bodhi, Reverend Ando (from Shasta Abbey), and I—were from different Buddhist traditions, our presentations made many similar points, but in different words and from different approaches.

The last morning was a go-around where we shared what had touched us during the gathering and what we would take away to share with others. We then dedicated the merit for the Buddha’s teachings to last forever, for the long life of our teachers and sincere practitioners, and for the awakening of all sentient beings.

I think the Buddha was smiling with joy witnessing us, his monastic disciples, meeting together harmoniously, discussing the Dharma, living the holy life, and working together as monastics to spread his teachings in the world.

Part of His Holiness the Dalai Lama’s reasons for writing Buddhism: One Teacher, Many Traditions was to bring followers of different Buddhist traditions together so that we can act in a united way to help relieve the suffering in the world. To do that, we first need to eliminate the old, erroneous preconceptions about other Buddhist traditions; thus the book explains the commonalities in our teachings and practices as well as the unique parts of each tradition. But here in the West, monastics are doing something that happens only infrequently in Asia: we gather as friends, sharing our thoughts and feelings with trust, empathy, and compassion and encouraging each other on the path to awakening.