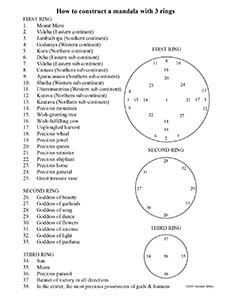 (East is toward you.)

(Rub your wrist 3x clockwise and then 3x counterclockwise while reciting:)

(middle) In the center is Mount Meru, the king of mountains,
(E) in the east the continent Videha,
(S) in the south Jambudvipa,
(W) in the west Godaniya,
(N) in the north Kuru.

(SE, NE) In the east are the sub-continents Deha and Videha,
(SW, SE) in the south Camara and Aparacamara,
(NW, SW) in the west Shatha and Uttaramantrina,
(NE, NW) in the north Kurava and Kaurava.

(Put the third ring on.)

(S) Here are the sun,
(N) moon,
(E) precious parasol,
(W) and victory banner.
(middle) In the center are the marvelous riches of gods and humans, with nothing missing, pure and delightful.

I offer these as a Buddha field to my glorious, holy, kind root guru, the lineage gurus, to the great Je Tsongkhapa, the Buddha who is the King of Sages, Vajradhara, and the entire assembly of deities. Please accept these with compassion for the sake of migrating beings. Having accepted them, please bestow on me and on the mother sentient beings abiding as far as the limits of space your inspiration with loving compassion.

Death under the bodhi tree
Dealing with anxiety