Venerable Jigme and I have been sharing the Dharma with the folks down in Spokane, Washington, at the Unitarian Universalist church on Monday nights, and we’ve been going through some of the basic lamrim meditations on the nature of the mind and how the mind is the source of happiness and pain. We covered those two last week. Then we were thinking, well what can we share that will bring some more clarity to the folks on where we get into trouble; why we think that something besides our minds is the source of happiness and pain. So this past Monday I shared what we call the three characteristics of cyclic existence. These are the three that sort of describe our present situation here in samsara and how we get into trouble. Then also how by looking at our situation a little bit more realistically we can see our potential for developing the kind of mind that we begin to understand is indeed the source of happiness and pain.

But then we checked in and said, well, what happens when something breaks? Or a relationship ends? Or you lose your job? Or somebody dies? We inevitably find ourselves extremely surprised, with a lot of emotion behind it. So although intellectually we say that we get impermanence, on the heart level, at least for me, I don’t get impermanence, and that is a major cause of my pain and discontent. So that’s one of the first characteristics of cyclic existence.

The first one is the dukkha of pain, which is that “ouch” kind of suffering. And that’s a reality of samsara. It either comes in the form of physical stuff, like broken bones and colds and diseases, or it comes in the form of some kind of mental pain, like depression or anxiety, fear, anger, and a lot of afflictive emotions.

The second one is the dukkha of change, which is, I find, is much subtler than the “ouch” kind of suffering. Every sentient being in the world probably gets the idea that there’s an “ouch” kind of suffering. The second one which is subtler than the suffering of pain is that what we call happiness is not true happiness. The example that I gave the other night was missing your lunch and coming home really hungry, and the person that you live with, or your housemate, or somebody, has gifted you with a homemade lasagna. So you sit down and the first few bites are, well I would say, real happiness. When in fact what it is is the diminishing of the big suffering, which is the suffering of hunger. And the beginnings of the sufferings of eating are so small that we haven’t noticed, so we misunderstand it as a form of happiness. But if we were to take logic and apply it to this experience it would seem that the more lasagna that we ate the happier we would get. And I think there was a general consensus in the room that night that most of us have had direct experience that this is not true. Just because we love to eat, generally speaking, and the more that we eat we do not experience happiness. And you can apply this to just about any type of experience, at least in human terms, walking, sitting, sleeping, having sex, being with friends, any type of experience or action that we do, sooner or later it will be apparent that it is, by its very nature, suffering.

The third one is the compounded dukkha or unsatisfactoriness, and this is the most subtle one. Because we really think, I mean, the mind is under the control of karma and afflictions. Although we perceive sometimes that we’re happy and content, we don’t have a lot of control about how that happiness and contentment arise, and it tends to get sabotaged more by the distortions and the afflictions that arise due to the negative karma. Then the body, because we’re in cyclic existence and we misunderstand the nature of reality, we have got ourselves in the cycle of getting born, getting old, getting sick, and dying. And it’s due to the ignorance that misunderstands these three characteristics of samsara, among other things.

The last one is the selflessness of phenomena. What we did is we took… We have two little Dharma dogs that come to the class, Buster and Sophie. Sophie, whom we all think is just cute as a button and exists from her own side completely, she wears these little sweaters, and she has a little nose, she’s just so sweet. So we just started putting her nose over there, and her ears over there, and her tail over there, and her fur… And where was Sophie? It was kind of an interesting experience because we just love Sophie, and we think that she exists as that little dog, unto herself, and that there’s this essence of “Sophie-ness” that exists within that little dog, with the little sweater with the pumpkin on it. But she doesn’t exist like that. And because we do think she exists like that, if anything should ever happen to Sophie it would just break our hearts.

The reason I think that Venerable Jigme and I chose this is because we have a lot of folks in this group, and we’ve been seeing this growing wonderful thing about people wanting to understand why they have the level of discontent, and restlessness, and unhappiness in their lives. They want to have tools, they want to understand, “Where’s my thinking going wrong? What can you give me that can help me get some clarity and to be able to bring some reality, some realism, to my life so I can look at things realistically, know what their flaws are, know what their capacity, how I can have a relationship to my life–the things and the objects in it–more realistically.” By looking at the three characteristics on how samsara exists, that it’s impermanent, that it’s in the nature of unsatisfactoriness, and that every object in this phenomenal world has no inherent existence from its own side, that it exists due to causes and conditions, by the parts which are generally not it either, and also the mind that labels it.

We had a very enlightening conversation after that talk. People are doing a lot of thinking on how can I apply this to my life so I don’t always feel like I’m getting side-swiped by things, and that I find myself surprised by my strong emotions, because I want to understand things more realistically.And so that’s why we offered it and it’s going to be a continuing enlivening conversation, I think, as the weeks go on. So hopefully that’s helpful. 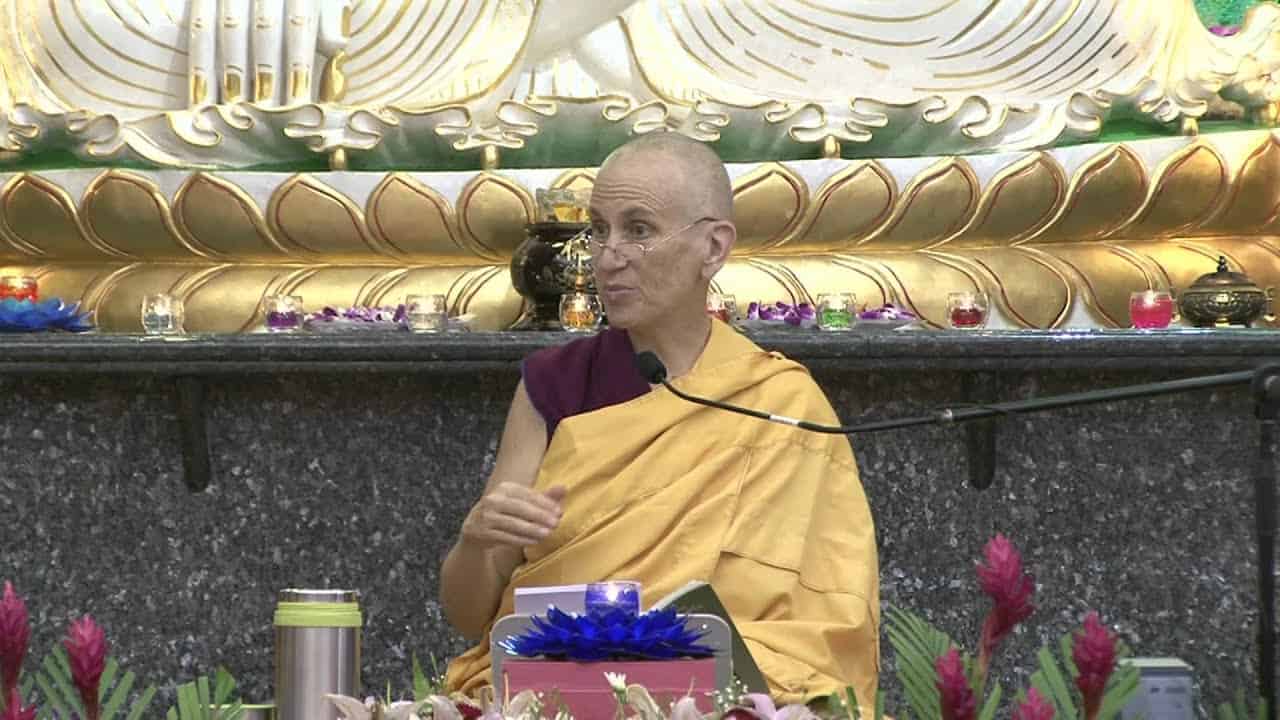 Lesson from an incarcerated person