After a little bit of a break, we are back to going through the lamrim prayer from the Guru Puja. In Verse 3, it says:

Aghast at the searing blaze of suffering in the lower realms, we take heartfelt refuge in the Three Jewels. Inspire me to eagerly endeavor to practice the means for abandoning negativities and accumulating virtues.

That one verse talks about the possibility of having an unfortunate rebirth in our next life, taking refuge as a remedy to that, and then when we take refuge, following the instructions of the Buddha, the first one being to observe the law of cause and effect or karma and its effects. This verse contains those three topics.

I think beforehand we talked a little bit about the lower realms and that while some people see them as mental states, they are actual physical places. When you’re born, they are as real to you as our world is to us. Which seems pretty real, doesn’t it? These places and our rebirth there are all created by our karma which is why we need to be careful about what we say and think and feel and do.

When we realize that there does exist the possibility for a lower rebirth, we become very concerned about what to do to avoid that and how to steer our lives in a positive direction. That leads us to take refuge in the Buddha, Dharma, and Sangha. They usually talk about the two reasons or the two motivations for taking refuge, one being a concern about the danger of a lower rebirth in particular and about rebirth in samsara in general, the second being faith or confidence in the Buddha, Dharma, and Sangha to be able to guide us [away] from that and to guide us to liberation and enlightenment. Then since we’re Mahayana practitioners, a third motivation is compassion for all living beings who are in the same situation as we are.

Refuge is a very important part of our practice. If you notice, all the different meditations we do, any kind of ceremony or ritual we do, it all starts with refuge. Everything starts with refuge and bodhicitta. When we wake up in the morning, we’re supposed to take refuge, aren’t we? First thing in the morning. Before we go to bed, we take refuge. Refuge kind of permeates our whole existence. Why is that so important? Because when we take refuge, we’re making very clear in our own minds what our spiritual direction is in life and who we’re relying upon to guide us in the direction that we want to go.

We’re always taking refuge, aren’t we, looking for happiness. It’s just we don’t have a very good comprehension of what happiness means, and so as a result, we take refuge in things that can’t lead us to the happiness we want. We’re taking refuge in external things, which themselves are impermanent. Impermanent things that are changing moment by moment by moment are never going to be able to provide us with some kind of stable security or bliss, let alone to be able to benefit sentient beings by leading them in that way. The things we take refuge in are things produced under the influence of afflictions and karma. Our body, our aggregates are already produced under the influence of afflictions and karma, and if we take refuge in other things that are produced in that kind of tainted way, then how are those things going to lead us to some kind of security and happiness?

They don’t have it in them to do that whereas the three jewels, the Buddha, Dharma, Sangha are not produced under the influence of afflictions and karma. In fact Buddha, Dharma, Sangha are the uncontaminated path in the true cessations or arise under that influence so they’re not under the influence of something that’s going to lead us into more dukkha or more suffering, but being free of that and instead being sustained by wisdom and by compassion, then they have the ability to guide us to the kind of happiness and state that we want, so that’s why we take refuge in them.

Tomorrow we’ll start talking a little bit more about the qualities of Buddha, Dharma, Sangha so that we know what the qualities are so that when we take refuge, we know exactly what we’re taking refuge in. Otherwise, it becomes like undiscriminating belief. 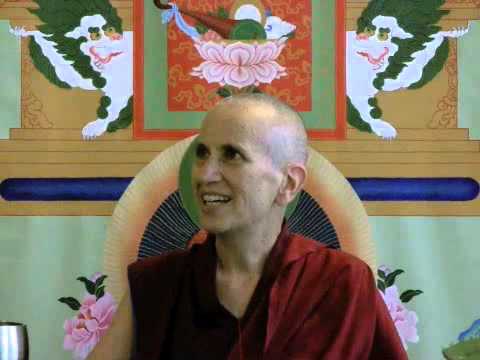 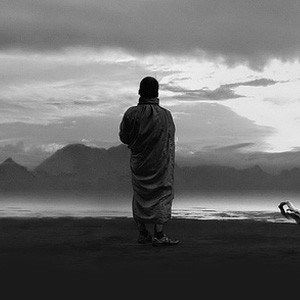