Here is the passage in the bhikkhunikkhandhaka that allows ordination of bhikkhunis by bhikkhus:1

This is quite straightforward. After a substantial intervening section, there are further details on bhikkhuni ordination. Here we find the following: 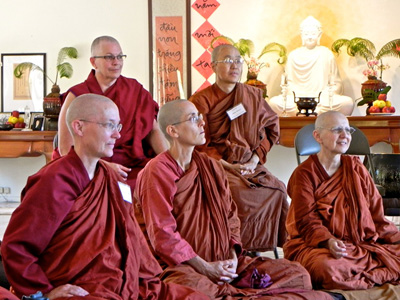 Ekato-upasampannābhikkhunisaṅghe, visuddhā…4
One accepted on one side in the bhikkhuni Sangha, and pure… ’

In the detailed definition of ‘bhikkhuni’in the bhikkhuni Vinaya there is no mention of one accepted ‘on one side’:

Neither is one accepted on ‘one side’ found in the shorter definition in the bhikkhu Vinaya:

Nevertheless, in the next line, in discussing the offences falling for exhorting bhikkhunis without permission of the Sangha, there is mention of bhikkhunis accepted on ‘one side’:

So the bhikkhuni accepted on one side is occasionally acknowledged, but was certainly not mainstream. In all the contexts it appears, it clearly implies she is accepted in the bhikkhuni Sangha (ekato-upasampannābhikkhunisaṅghe, visuddhā…). I do not believe there is any context, after the allowance for ordination on both sides, that acknowledges one ordained only by the bhikkhus. It seems that the normal process was that one would ordain in the bhikkhuni Sangha, then in the bhikkhu Sangha. Sometimes this process might be interrupted, for example if there were dangers preventing her from travelling to the bhikkhu Sangha for ordination.7 During this interval she would be accepted on ‘one side’.

Nevertheless, it remains the indisputable fact that the allowance for ordination by bhikkhus alone is there, and it is never rescinded. This contrasts with the situation in the bhikkhu ordination procedure. The first allowance is for the going forth and ordination by three refuges:

Later this is rescinded:

This is quite straightforward. But the situation with the bhikkhunis is less definitive. The allowance for acceptance by bhikkhus only is clearly stated and never rescinded, but the text proceeds as if it no longer applied. I would understand this as most likely just a slight editorial sloppiness in treating the bhikkhuni procedure. It could not be argued that such an ordination by the bhikkhus only would be the ‘best practice’ according to the Pali Vinaya. But neither could it be maintained that it was unallowed.