Venerable Thubten Chodron presented this paper at the First International Conference on Women’s Role in the Sangha in Hamburg, Germany, in July, 2007. See also the longer and more complete version of this paper (with bibliography and more endnotes) which was published in the book of the conference proceedings.

Before beginning, I would like to thank Bhikshuni Tien-chang for her help in doing the research for this paper. She is very humble and did not want to be listed as a co-author, but in fact, this paper would not exist without her assistance. 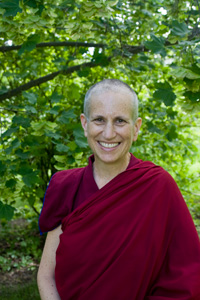 The kindness of previous generations of monastics, both Tibetan and Chinese, is so apparent.

When I received sramanerika ordination in Dharamsala, India, in 1977, I was told the story behind the blue cord on our monastic vest: it was in appreciation of the two Chinese monks who aided the Tibetans in reestablishing the ordination lineage when it was on the verge of extinction in Tibet. “Full ordination is so precious,” my teachers instructed, “that we should feel grateful to all those in the past and present who preserved the lineage, enabling us to receive the vow today.”

A bhikshu sangha of three Tibetan and two Chinese monks ordained Lachen Gongpa Rabsel (bLla chen dGongs pa rab gsal) after wide-scale persecution of the Buddhist sangha in Tibet. Lachen Gongpa Rabel was an exceptional monk, and his disciples were responsible for restoring temples and monasteries in Central Tibet and ordaining many bhikshus, thus spreading the precious Buddhadharma. His ordination lineage is the principal lineage found in the Gelug and Nyingma schools of Tibetan Buddhism today1.

In recent years discussion of the possibility of establishing the bhikshuni sangha in countries where it has previously not spread and/or has died out has arisen. In the context of the Tibetan tradition where no Mulasarvastivadin bhikshuni sangha has ever existed, is it possible for bhikshuni ordination to be given either:

The ordination and activities of Bhikshu Lachen Gongpa Rabsel, who restored the bhikshu lineage in Tibet after the decimation of Buddhism and the persecution of the sangha and the decimation of the Dharma during the reign of King Langdarma provides precedents for both ordination by a sangha consisting of members of different Vinaya lineages and adjustment of Vinaya ordination procedures in reasonable circumstances. Let’s examine this in more depth.

Scholars have different opinions regarding the dates of Langdarma and Gongpa Rabsel that vary over a span of 120 years. The reason for this is because Tibetans recorded years in terms of elements and animals that formed sixty-year cycles, and no one knows exactly which cycle the ancient historians meant when they mentioned a date. However, the exact dates do not affect the main point of this paper, which is that there is a precedent for ordination by a sangha composed of Mulasarvastivadin and Dharmaguptaka monastics.

The Tibetan king Langdarma persecuted Buddhism almost to extinction. During his reign, three Tibetan monks—Tsang Rabsal, Yo Gejung, and Mar Sakyamuni—took Vinaya texts and went to Amdo. The son of a Bon couple approached them and requested the going-forth ceremony. The three monks gave him novice ordination, whereafter he was called Gongpa Rabsel.

Gongpa Rabsel then requested full ordination, upasampada, from these three monks. They responded that since there were not five bhikkhus—the minimum number required to hold an upasampada ceremony in an outlying area—the ordination could not be given. Two respected Chinese monks—Ke-ban and Gyi-ban—were asked to join the three Tibetan monks to give bhikshu ordination to Gongpa Rabsel. Were these two Chinese monks of the Dharmaguptaka or the Mulasarvastivadin lineage? Our research indicates that they were Dharmaguptaka. Establishing this involves tracing the history of Vinaya in China.

Dharmakala traveled to China around 250. At that time, no Vinaya texts were available in China. Monks simply shaved their heads to distinguish themselves from the laity. Dharmakala translated the Mahasamghika Pratimoksha which the Chinese monks then used only to regulate their daily life. He also invited Indian monks to establish the ordination karma procedure and give ordination. At this same time, a Parthian monk Tandi, who was also versed in Vinaya, came to China and translated the Karmavacana of Dharmaguptaka. Although the Chinese record does not state which Vinaya tradition’s procedure was used for the first ordination, Vinaya masters assume that, because the Dharmaguptaka had just been translated, it was used. Thus Dharmakala is part of the Dharmaguptaka lineage.

For quite a while, the model for Chinese monks seemed to be that they were ordained according to the Dharmaguptaka ordination procedure, but their daily life was regulated by the Mahasamghika Pratimoksha. Not until the fifth century did other Vinaya texts become available to them.

The first Vinaya text introduced to Chinese communities was Sarvastivadin. Kumarajiva translated it between 404-409. It was well received and widely practiced. Soon after, the Dharmaguptaka Vinaya was translated into Chinese by Buddhayasas between 410-412. Both the Mahasamghika and Mahisasaka Vinayas were brought back to China by the pilgrim Faxian. The former was translated by Buddhabhadra between 416-418, while the latter by Buddhajiva between 422-423.

The renowned Vinaya master Daoxuan (596-667) is regarded as the first patriarch of Vinaya school in China. He observed that even when the Sarvastivada Vinaya reached its peak in southern China, the Dharmaguptaka procedure was still used for ordination. Thus, in line with Facong’s thought, Daoxuan advocated that all of monastic life—ordination and daily life—for all Chinese monastics should be regulated by only one Vinaya tradition, the Dharmaguptaka.

In 709 the T’ang emperor Zhong Zong issued an imperial edict declaring that all monastics must follow the Dharmaguptaka Vinaya. Since then, Dharmaguptaka has been the sole Vinaya tradition followed throughout the lands of Chinese cultural influence, as well as in Korea and Vietnam.

While the other Vinaya traditions are discussed in Chinese records, there is hardly any mention of the Mulasarvastivadin and no evidence has been found that it was practiced in China. In the Vinaya sections of various Biographies of Eminent Monks and in historical records, there is no reference to Mulasarvastivadin ordination being given. Furthermore, a Japanese monk Ninran (1240-1321) traveled extensively in China and recorded the history of Vinaya in China. He mentioned the four Vinaya lineages—Mahasamghika, Sarastivadin, Dharmaguptaka, and Mahisasaka—and said, "Although these Vinayas have all spread, it is the Dharmaguptaka alone that flourishes in the later time.” He made no reference to the Mulasarvastivada Vinaya existing in China.

Let us return to the ordination of Lachen Gongpa Rabsel, which occurred in the second half of ninth century (or possibly the tenth, depending upon which dates one accepts for his life), at least one hundred and fifty years after the imperial edict. According to Nel-Pa Pandita, when Ke-ban and Gyi-ban were invited to become part of the ordaining sangha, they replied, “Since the teaching is available in China for us, we can do it.” This statement clearly shows that these two monks were Chinese and practiced Chinese Buddhism. Thus they must have been ordained in the Dharmaguptaka lineage and practiced according to that Vinaya since all ordinations in China were Dharmaguptaka at that time.

Even if Ke-ban and Gyi-ban had received Mulasarvastivadin ordination from Tibetans in Amdo, why would they have been asked to join the three Tibetan monks to give the ordination? There would already have been Tibetan Mulasarvastivadin monks in the area. Surely the three Tibetan monks would have asked them, not two Chinese monks, to participate in ordaining Gongpa Rabsel.

Thus, all evidence points to the two Chinese monks being Dharmaguptaka, not Mulasarvastivadin. Here we have a clear precedent in Tibetan history for giving ordination with a sangha consisting of Dharmaguptaka and Mulasarvastivadin members. This precedent was not unique to Gongpa Rabsel’s ordination. As recorded by Buton, Ke-ban and Gyi-ban participated with Tibetan bhikshus in the ordination of other Tibetans as well, for example, ten men from Central Tibet, headed by Lumey. Other disciples of Gongpa Rabsel were also ordained by the same sangha which included the two Chinese monks.

In general, to act as preceptor in a full ordination ceremony, a bhikshu must be ordained ten years or more. However, Gongpa Rabsel later acted as the preceptor for the ordination of Lumey and nine other monks although he had not yet been ordained five years. Buton says that when the ten Tibetan men requested him to be their preceptor (upadhyaya), Gongpa Rabsel responded, “Five years have not yet passed away since I was ordained myself. I cannot therefore be a preceptor.” But Tsang Rabsel said, “Be such an exception!” and thus Lachen Gongpa Rabsel was made preceptor with Ke-ban and Gyi-ban as assistants.” In Lozang Chokyi Nyima’s account, the ten men first requested Tsang Rabsel for ordination, but he said he was too old and referred them to Gongpa Rabsel, who said, “I am unable to serve as the upadhyaya as five years have not yet elapsed since my own full ordination.” At this point, Tsang Rabsel gave him permission to act as preceptor in the bhikshu ordination of the ten men from Central Tibet.

Since Gongpa Rabsel acted as preceptor although he had been ordained less than five years, there is a precedent for adjusting the ordination procedure described in the Vinaya in reasonable conditions. This was done for good reason—the existence of the Mulasarvastivadin ordination lineage was at stake. These wise monks clearly had the benefit of future generations and the existence of the precious Buddhadharma in mind when they made this adjustment. Applying this to the present situation of Mulasarvastivadin bhikshuni ordination, for the benefit of future generations and for the existence of the precious Buddhadharma, reasonable adjustments could be made in the ordination procedure. For example, the Tibetan Mulasarvastivadin bhikshu sangha alone could ordain women as bhikshunis. After ten years, when those bhikshunis are senior enough to become preceptors, the dual ordination procedure could be done.

This research is respectfully submitted for consideration by the Tibetan bhikshu sangha. Having bhikshunis in the Tibetan tradition would enhance the existence of the Buddhadharma in the Tibetan community. The four-fold sangha of bhikshus, bhikshunis, male and female lay followers would exist. In addition, from the viewpoint of the Tibetan community, Tibetan bhikshunis would instruct lay Tibetan women in the Dharma, thus inspiring many of the mothers to send their sons to monasteries. This increase in sangha members would benefit Tibetan society and the entire world. Seeing the great benefit that would unfold due to the presence of Tibetan nuns holding the Mulasarvastivadin bhikshuni vow, I request the Tibetan bhikshu sangha to do their utmost to make this a reality.

On a personal note, I would like to share with you my experience of researching this topic and writing this paper. The kindness of previous generations of monastics, both Tibetan and Chinese, is so apparent. They studied and practiced the Dharma diligently, and due to their kindness we are able to be ordained, so many centuries later. I would like to pay my deep respects to these women and men who kept the ordination lineages and practice lineages alive, and I would like to encourage all of us to do our best to keep these lineages alive, vibrant, and pure so that future generations of practitioners can benefit and share in the tremendous blessing of being fully ordained Buddhist monastics.