The principal realization of the path is the determination to be free from all problems and dissatisfaction. This arises from recognizing that our present situation isn’t completely satisfactory and that we’re capable of experiencing greater happiness. Thus, we’re determined to free ourselves from a bad situation and to aim for a better one.

There are roughly 160,000 people confined within the Texas Dept. of Criminal Justice system. That number has increased dramatically over the last ten years and is still rising. While the policy makers have not been able to find a solution to crime, they have an answer for the criminal. That answer, of course, is prison. Surely there are various reasons for the prison boom. Can Americans be committing more crime? Is the economy partially to blame? Is the “lock them up and throw away the key” mentality arising from public fear? Are judges and prosecutors becoming more conservative? Are more of us coming back to prison after being released? The answer to these questions is a resounding YES. 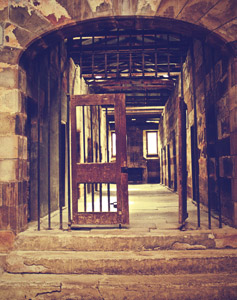 If ever I need a reason to believe in karma, all that I need to do is look to the cell door that bars me from the outside world. Cause and effect. (Photo by Paul D’Ambra)

Yes, there are many reasons that the criminal justice system is growing. However, there is only one reason that I am in prison: I lived a lifestyle that was not only unproductive, but was also harmful. If ever I need a reason to believe in karma, all that I need to do is look to the cell door that bars me from the outside world. Cause and effect.

The number of people incarcerated nationwide is growing. Not only are more people committing crimes, more people are coming back for seconds. According to the U.S. Department of Criminal Justice, recidivism rates have grown 5 percent in the last decade. On average, seven out of ten of us being released will be back. So how can we reverse this upward trend in incarceration rates? One thing is fairly clear. It matters little to the justice system if we return or not. In Texas a parolee is given $50 and a non-refundable bus ticket. How is anyone expected to start over fresh with so little to work with? What will $50 buy these days?

In order for us to reenter the free world and become a part of society, we have to start now. The same thing that brought us to prison will be what allows us to be productive upon release. That is choice. The choices that I made in the past led me here. The decisions that I make now can one day ensure that I will not be part of the 70 percent who are returning to the penitentiary.

As prisoners we are not afforded the opportunity to make a lot of day-to-day decisions. What we eat and wear, where we work, when we exercise and worship; almost everything is organized and decided by the institution. We do, however, have choices that we can make, and these choices are far more important. We must seriously evaluate ourselves. We must take personal responsibility not only for the past, but, more importantly, for the future. I can leave here as the same person that came here, or I can leave here with a determination that things will be different for me and hopefully for the people I come into contact with. We can amend our character defects. We can become mindful of our emotions and the effect they have on our actions. We can expand our education. We can set goals for ourselves that will produce positive results for our future.

I am in Administrative Segregation due to my past actions and the administration’s concerns over security. I am severely limited as to any privileges I may get. I am, however, allowed to order books from the library. If I am really searching for growth, then I have a whole library of knowledge at my disposal.

Of course, in general population there is more opportunity to enroll in classes that can ready you for the free world. The Criminal Justice Police Council recently observed that post-release employment was in direct correlation to the amount of education that an inmate had. Not only did the parolees with the highest level of education possess better, higher paying jobs; the parolees with the highest wages had a lower recidivism rate than those who earned less. Every unit in the system has some type of an educational program that we can take advantage of if we want to. Other programs such as substance abuse, anger management, and vocational courses may also be available, as are many religious or faith-based classes. I’m sure that many of these courses are stripped to the bare basics due to either funding problems or simply indifference. I am also sure that there are inept teachers, counselors, etc., just as there are students that don’t want to learn or are taking classes only as a stipulation for release. However, I still believe that if you enter a program with a deep desire to better yourself, you will come away from it for the best. Personal responsibility and proper motivation are what will make a difference.

The system has many flaws. Whether it is because of corruption or merely laziness, the justice system is failing the inmates that it keeps and the society that it is supposed to protect. It isn’t because the system is so unrealistic or unmanageable. The problem is the attitude that crime and punishment have fostered within society. Politicians have taken from it the power to sway voters. We inmates use the injustices done to us as an excuse for our resentments and anger. Society weighs in somewhere between their fear of becoming a victim and the yearning for retribution and revenge. I believe that neither the politicians nor the public will change their stance or their feelings until we inmates change first.

In a recent poll taken by the University of Connecticut, 52 percent of people surveyed said that prisoners had too many rights. 24 percent said that our incarceration was strictly for the purpose of punishment. What is going to change that attitude? It certainly will not change public attitude if I get out of prison only to knock off the local 7-11 two weeks later. What will change their attitude is for us to make a change in ourselves. There are a lot of obstacles before us. Some people don’t want to see us change. Some want us to change, but just don’t believe it is possible. People put their faith in us in the past, but we let them down or took advantage of them. We can’t expect to say, “So sorry—that was the old me. I’m not like that anymore,” and think everyone will automatically forgive and forget. The public is wary of us and justifiably so. We have to prove ourselves. We have to search for a better way. Every time we find something that is beneficial, we need to hold onto it. We have to believe in ourselves. No matter what the deficiencies of the system or the negativity of the public, we must possess “the determination to be free” against all odds.

Isn’t that the truth! Thanks Lama!