Blossoms of the Dharma: Living as a Buddhist Nun grew out of Life as a Western Buddhist Nun, a three-week educational program for nuns held in Bodhgaya, India, in February, 1996. During this course, the nuns listened to teachings on the Vinaya—monastic discipline—from a Tibetan geshe and a Chinese bhikshuni, other teachings from a variety of qualified spiritual masters, and talks by the nuns themselves. This volume is a compilation of the latter. These talks were given in a relaxed, friendly atmosphere, generally in the evening at the end of a long, happy day of listening to Vinaya teachings, meditating, and discussing the Dharma. The nuns were eager to share their experiences and learn from each other. Although they were all Buddhist nuns, they came from a wide variety of backgrounds and had trained as nuns in various countries and conditions. Much was to be learned from each other’s experiences.

Although this book arises from a specific event, its content extends far beyond that. Here we glimpse the history, discipline, life experiences, and teachings of nuns from a variety of Buddhist traditions. I teach in both the East and the West and have noticed that even before people want to listen to a Dharma talk by a nun, they want to know about her life. What does living as a nun entail? Why did she make that choice? What are her life experiences? 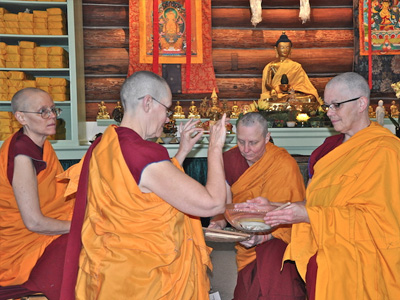 Most became nuns in order to commit their lives to practicing and actualizing the Buddha’s teachings. (Photo by Sravasti Abbey)

The people who contributed to this volume are all Buddhist practitioners. Although some are also scholars, their main passion is to practice and actualize the Buddha’s teachings. Most became nuns in order to commit their lives to this process. These are people whose primary interest is transforming their own minds, and through this to contribute to society and to the welfare of others. They are not people who seek public recognition for their achievements or power in religious institutions, although being human beings, these motivations may of course sneak in at times—and hopefully are counteracted! Most of the contributors are Western nuns, many of whom have lived in other cultures and countries in order to learn and practice the Dharma. By discovering through experience how the Dharma is practiced in monasteries in traditional Buddhist societies, they have a wealth of knowledge and experience to share as they bring the Dharma and the Buddhist monastic tradition to the West. The three Asian contributors help us learn from the grounded experience of well-established Buddhist traditions.

This book begins with the message His Holiness the Dalai Lama sent to Life as a Western Buddhist Nun. Here we see clearly the changing role of women in Buddhism. Such a message would not have been written even a few decades ago.

An introduction follows, setting the stage and giving the background about why women, especially those who grew up in modern Western cultures, become Buddhist nuns. Section I of the book discusses the history and monastic discipline (Vinaya) of the nuns and the nuns’ order. Due to their scholarship and knowledge about the nuns’ history and discipline, Bhikshuni Lekshe Tsomo, Dr. Chatsumarn Kabilsingh, and Bhikshuni Jampa Tsedroen have, for years, been instrumental in improving the situation of nuns all over the world.

Section II presents nuns’ experiences and life styles. Bhikshuni Tsultrim Palmo, originally from Poland, tells of Gampo Abbey in Canada, which follows the Nyingma-Kagyu tradition of Tibetan Buddhism. Ajahn Sundara, from the Thai Forest tradition of Theravada Buddhism, tells about the lives of nuns transporting that ancient tradition to the West, and Bhikshuni Tenzin Namdrol tells of life at Thich Nhat Hanh’s community in France, Plum Village. Bhikshuni Ngawang Chodron from the Nyingma tradition of Tibetan Buddhism has lived in monasteries in China and reveals how the nuns there live and train. Sramanerika Thubten Lhatso, from Tibet, relates her experience of training in Tibet, being uprooted, and preserving the nuns’ tradition in India. An Australian, Chi-Kwang Sunim tells of living in Korea and training with the Zen nuns there, while Reverend Mitra Bishop tells of the Zen tradition as practiced both in Japan and in the United States.

Section III reveals the teachings of the nuns. I begin by describing how to avoid some easy-to-make mistakes in Dharma practice. Bhikshuni Jampa Chokyi, a Spanish nun from the Gelu tradition of Tibetan Buddhism, discusses how to relate to a spiritual master, and Bhikshuni Wendy Finster, a nun and therapist from Australia, brings a psychological perspective to Dharma practice. Venerable Khandro Rinpoche, a highly respected Tibetan nun and teacher, helps us discover the essence of Dharma practice.

The appendices inform interested readers about the Life as a Western Buddhist Nun educational program. The glossary contains words frequently used in this book. Other words which are used only once and whose meanings are clear in that context are not included. A list of further reading offers resources for the topics discussed in this book.

Sanskrit spellings of foreign terms are used by contributors from the Mahayana Buddhist traditions, while Pali spellings are used by those from the Theravada Buddhist traditions. The Sanskrit, Pali, Tibetan, and English equivalents of many terms are found in the glossary. For ease of reading, foreign terms frequently used in this book—such as bhikshuni, sramanerika, and bodhicitta—are not italicized, while ones infrequently used are. For a similar reason, diacritics have been omitted, although these are used in scholarly publications. The term “Sangha” indicates those who have realized emptiness directly and are thus objects of refuge, while “sangha” indicates the community of fully ordained monks or nuns. At times, “he” and “she” are alternated to be gender neutral where appropriate.

Because the vast majority of pieces in this volume began as oral presentations, they were condensed and edited to form the essays contained here. The information and views expressed in each piece are those of the individual contributor and are not necessarily those of the editor. Each nun speaks according to the tradition(s) she studies and practices; explanations of some points may vary from one Buddhist tradition to another.

Bhikshuni Jampa Chokyi and I, as the organizers of Life as a Western Buddhist Nun, wish to offer special thanks to many people. His Holiness the Dalai Lama, Tenzin Geyche Tetong, Bhikshu Lhakdor, Venerable Master Bhikshuni Wu Yin, and Bhikshuni Jenny have been continuously supportive of our endeavors and helpful in accomplishing them. We also thank Venerable Sonam Thabkye, Bhikshuni Jampa Tsedroen, Bhikshuni Lekshe Tsomo, Bhikshuni Tenzin Kacho, Sramanerika Tenzin Dechen, Sramanerika Paloma Alba, Mary Grace Lentz, Margaret Cormier, Bets Greer, Lynn Gebetsberger, Kim Houk, Lydia Kaye Maddux, Sarah Porter, Angel Vannoy, and Karen Shertzer for their tireless efforts before or during the program. We are grateful to Dharma Friendship Foundation in Seattle for enabling us to organize Life as a Western Buddhist Nun under their auspices, Luminary Temple in Taiwan, and many other kind benefactors who made this program possible, and to all the participants, who made this program successful.

I would like also to thank those who assisted in the preparation of this book: Barbara Rona for her thoughtful, precise editing of the manuscript; Lindy Hough, Barbara Rona, and Joan Stigliani for their valuable suggestions; Yeo Soo Hwa and Lorraine Ayre for transcribing the talks; Bets Greer for proof-reading the manuscript, and the members of Dharma Friendship Foundation for their support while I worked on this book. I would especially like to thank my wonderful Dharma sisters who gave these informative and inspiring talks for their dedication to the Buddha’s teachings and for sharing their knowledge and experience with others.

May our efforts to learn, practice, and spread the Buddha’s precious teachings ripen in the temporary and ultimate happiness of each and every sentient being.