Love Unbounded tells of the three-day visit of Ajahn Candasiri and Sister Medhanandi, two Theravadin Buddhist nuns from Amaravati Monastery in England, to the Sisters of the Love of God, one of the few Anglican contemplative orders, at Fairacres, The Convent of the Incarnation, on the outskirts of Oxford. Originally published in the Forest Sangha Newsletter, it is reproduced here with permission from Ajahn Candasiri.

Some years ago Sister Rosemary from the Order of the Sisters of the Love of God came to spend two months at Amaravati Buddhist Monastery to pursue her interest in meditation, stimulated through reading the teachings of our abbot, Ajahn Sumedho. After discovering, in addition to a deep sense of spiritual friendship, that we had been at school together almost 30 years before, we kept in contact. I was delighted when an opportunity came to pay her a visit.

From the moment Sister Medhanandi, who is also a nun from Amaravati Monastery, and I stepped off the bus in Oxford and were met by Sister Rosemary, we were made to feel at ease. As three brown-robed figures conversing animatedly as we walked through the streets, we attracted a certain interest: her elaborate head dress and gold crucifix, our shaven heads, and all of us wearing sandals. We made our way to the convent, which is situated on a quiet suburban road. It consists of several buildings constructed over a time span of about one hundred years and is set in five acres of enclosed gardens where fruit and vegetables are grown and formal gardens merge with less cultivated areas.

As we entered the cool silence of the enclosure, our voices naturally dropped to a whisper and then to silence in accordance with the rule followed by the community. This simple observance brings an aura of quiet collectedness as the sisters move about in the cloisters. Most communication happens by notes—each sister has a note clip in the main hallway—or by gesture. When meeting the superior, Mother Anne, I noticed we all felt a slight awkwardness in finding suitable gestures of respect and greeting, but we knew we were welcome. 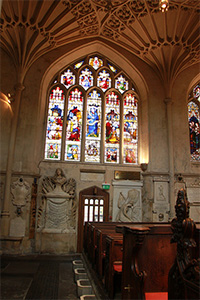 Each moment felt precious as we drank from the well of goodness that we found there. (Photo by Cristian Bortes)

It was our intention to merge as much as possible into the daily life of the community. However, Sister Rosemary, although appreciative of our intention to be as discreet a presence as possible, had other ideas. I was surprised to see on the daily schedule thoughtfully prepared for us in our cells “morning puja” and “evening puja,” as well as group discussion and meditation workshop on Saturday afternoon. These were to take place in the Chapter House, which had been set aside for us to use during our stay. We attended their Offices in the chapel, including the Night Office from 2 to 3 am, and helped with simple domestic duties—washing up, sewing curtains and taking care of the refectory. At suitable times and in suitable places we also did a fair bit of talking. So our days were well-filled, and yet somehow there was a sense of spaciousness. Each moment felt precious as we drank from the well of goodness that we found there.

As we entered the chapel it was natural to bow—a deep bow from the waist—and we were seated among the professed sisters. For some of them it must have felt very strange to have us there and included to such a degree. For our part, we felt deeply touched. I looked at the faces of the sisters sitting opposite to us, many of them getting older now, some of them very old. From some, one could sense the struggle of the life, from others there seemed to emanate a radiance—the beauty of one who is whole and at peace with existence. For each I felt deep respect and gratitude.

We ate with the community and the other female and male guests at long wooden tables in the refectory. The midday meal, which was eaten from a single wooden bowl, was accompanied each day by a reading on aspects of spiritual life. During our stay the theme was celibacy in religious community and the integration of the active and contemplative aspects of our life. It seemed strikingly pertinent.

The sisters, concerned that it might not interest us, were somewhat hesitant about inviting us to their choir practice. Each week an elderly monk from another Order nearby visits “to try to teach us to sing,” as one of the sisters explained. But it was a delight to experience their interaction with him and to hear their Eastertide Alleluias soar to the highest heavens. One felt they were simply brother and sisters in the holy life. In contrast, the first morning of our visit, we noticed the immediate sense of polarity that arose with the entry of the priest to the communion service. Until that time we had all simply been religious people. Suddenly in relation to him, we became “women.”

Each morning and evening we met in the Chapter House with those of the community who wished to attend our puja and meditation. Although the sisters do not receive training in formal meditation, as we sat together the quality of silence and still attention was quite remarkable. One sensed that this presence of mind was the result of years of silent prayerfulness and recitation of the Office—an austere and impressive practice.

Our discussions were lively. Although they keep silence for much of the time, the recreation periods two or three times a week encourage discussion and stimulate a keen interest and reflection on many aspects of life. They were very interested in the Buddhist approach to working with the mind. It was a revelation to them that significant changes in the mind and mental states could occur simply through patiently bearing with them. There was no need to struggle or to feel guilty or burdened by the negativity, doubt or confusion that affect us all. Also interesting to them were the practices of walking meditation and of just sitting consciously as ways of attuning to the physical body.

We talked together about many things, aware that what we shared was vastly greater than our differences. It was clear that we could learn from and support one another without compromising our commitment to our respective traditions in any way. It was also touching to realize that we experienced the same personal doubts and sense of inadequacy, and that each felt the other to be stronger or more impressive. I sensed the fragility and subtlety of the renunciant life, demanding as it does the surrender of personal power and control; the need to give of oneself totally and, as one sister put it, simply to “trust the process.”

I met with Sister Helen Mary, who is eighty-four years old now. Having lived alone for twenty-five years on Bardsey Island, she has the appearance of one well worn by the elements of nature. Again I felt a shyness, a hesitation: should we bow, shake hands, or what? But that seemed to be a very minor matter! She spoke gently and quietly but with great enthusiasm about the wonder of living “immersed in the spirit.” I knew what she meant, although I would have used different words.

On the last morning of our stay, we met with Mother Anne. I was curious to know how she regarded our visit and Sister Rosemary’s great interest in the Buddhist tradition. She told us that she had had no doubts about receiving us and that she felt that nowadays it is essential to recognize God beyond the limitations of any particular religious convention. This was clearly conveyed when we finally took our leave, as she enveloped each of us in turn with the most whole-hearted embrace that I have ever experienced! There was no doubt about the “Love of God”—or whatever name one would like to call it—that we shared at that moment.

At the last Office, with the afternoon sunlight filtering through the lofty windows of the chapel, I was struck by the awesome purity of the life: its simplicity and renunciation, its total dedication to what is wholly good. Beside it, the outside world we were about to enter seemed overwhelmingly confused and complicated. There is so little in our society to encourage people to live carefully, so much to stimulate greed and selfishness. Later on I realized that many visitors experience our Buddhist monastic life in much the same way, even though from the inside it can often seem quite ordinary and full of flaws.

As we waited with Sister Rosemary for our bus back to London, we continued to talk about meditation and mindfulness. Meanwhile, the bus we were due to catch sailed by. Oh mindfulness! Not long after another came, and more attentive this time, we managed to make it stop for us. We parted, our hearts full and deeply grateful.

Ajahn Candasiri was born in Scotland in 1947 and was brought up as a Christian. After university, she trained and worked as an occupational therapist, mainly in the field of mental illness. In 1977, an interest in meditation led her to meet Ajahn Sumedho, shortly after his arrival from Thailand. Inspired by his teachings and example, she began her monastic training at Chithurst as one of the first four Anagārikā. Within the monastic community she has been actively involved in the evolution of the Nuns’ vinaya training. She has guided many meditation retreats for lay people, and particularly enjoys teaching young people and participating in Christian/Buddhist dialogue. (Photo and bio courtesy of Amaravati Buddhist Monastery)
View all posts by Ajahn Candasiri →

A celebration of love
Integrity and consideration for others